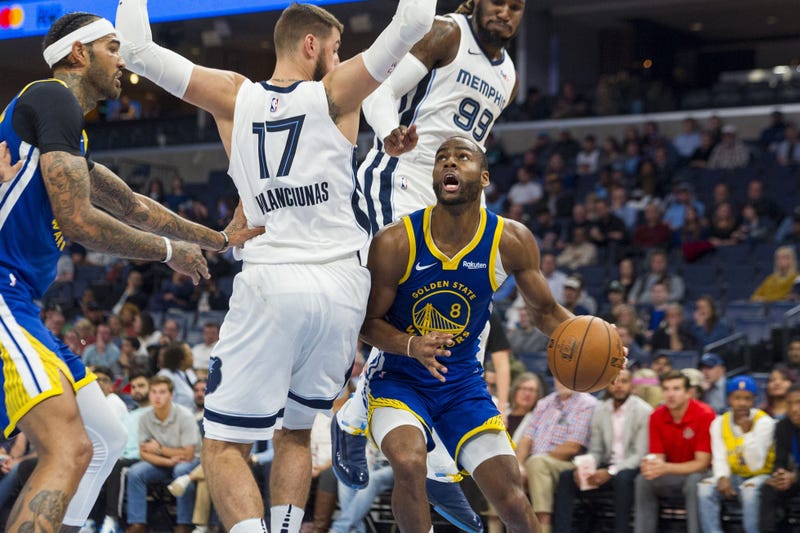 The Warriors broke their seven-game losing streak and got the win over the Memphis Grizzlies, 114-95, on Tuesday night. They are now 3-12 on the season.

The veteran Alec Burks lead the Dubs with 29 points, 8 rebounds, and 2 assists.

Marquese Chriss had his best game as a Warrior with 17 points, 6 rebounds, 2 assists, and 4 blocks off the bench.

This dunk from Marquese Chriss was sooooo nice pic.twitter.com/V3fwNIgSfe

Head coach Steve Kerr had nothing but praise for Chriss following the game. He said there's a reason he was the 8th overall pick in the 2016 NBA Draft. Kerr also said the Warriors have been working with him on his defense and it definitley shows.

Eric Paschall got off to a slow start and got frustrated after he got in early foul trouble. The rookie ended up finding his groove and hit a couple big buckets to seal the victory before he fouled out with a couple minutes left in the game.

Despite the slow start, he still put up 17 points, 5 rebounds, and 3 assists.

Draymond Green was two points shy of his 24th career regular-season triple-double. He finished with 8 points, 10 rebounds, and 11 assists.

He took a scary fall at the three minute mark in the third quarter. It was apparent his right elbow was in some pain and he went to the bench where he was attended by a trainer.

Here’s the play where Draymond hit his elbow pic.twitter.com/kzOfnA1Qz5

Thankfully, he came back and finished the game.

The Warriors head straight to Dallas where they'll take on the Mavericks on Wednesday. Tip-off is at 4:30pm and coverage begins at 3pm on 95.7 The Game.