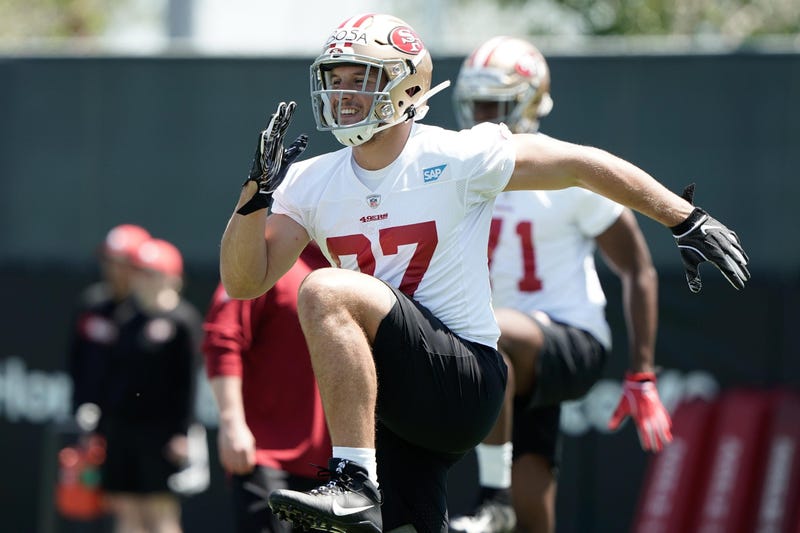 The San Francisco 49ers are a little over a week away from debuting their revamped defensive line at training camp. Dee Ford is set to bring speed to the edge, Arik Armstead is looking to parlay back-to-back solid seasons and DeForest Buckner will be vying for a Defensive Player of the Year nod.

Yes, there is still time to sign Bosa prior to the start of camp on July 26. But should there be a concern he hasn't signed on the dotted line yet? A handful of draft picks are still unsigned as we inch closer to camp. So, there’s no need to panic, but it still raises questions.

If the collective bargaining agreement locks in Bosa’s years plus pay why hasn’t he signed? There could still be some stipulations Bosa’s agent is working on like signing bonus and offset language agreements, but with Bosa’s family history there is some cause for concern.

Nick’s brother, Joey, was the last first-round pick of the 2016 draft to sign his rookie deal and it caused his rookie year to get off to a rocky start. Joey aggravated a past injury in camp and missed the first four games of the 2016 season. Although Joey went on to win Defensive Rookie of the Year in 2016 with a 10.5 sack campaign, his story should serve as a warning for the 49ers Bosa brother.

Bosa has dealt with injuries his entire football career. It was his only redflag coming out of Ohio State. He missed the majority of his 2018 season with a groin/abdominal injury before leaving Ohio State to focus on the draft. His high school career was ended by an ACL injury. Bosa hasn’t played football since Sept. 15, 2018 making his offseason a significantly longer than that of the average top pick.

It’s not an oddity for Lynch to sign his first-round selection with training camp looming. Soloman Thomas signed during the first day of camp, while Mike McGlinchy signed one week before camp began. But with Bosa’s injury history (plus layoff), it needs to be a priority for Lynch to have him signed, sealed and delivered to Santa Clara for the start of camp.

On 95.7 The Game’s NFL Insider Week, both Alex Boone and Brian Baldinger tabbed Lynch as the owner of the hottest seat, if things don’t go well in 2019.

With all the pressure on Lynch (Kyle Shanahan and Jimmy Garoppolo, too) heading into this season, the GM can’t go into camp with the team’s first round draft pick unsigned.