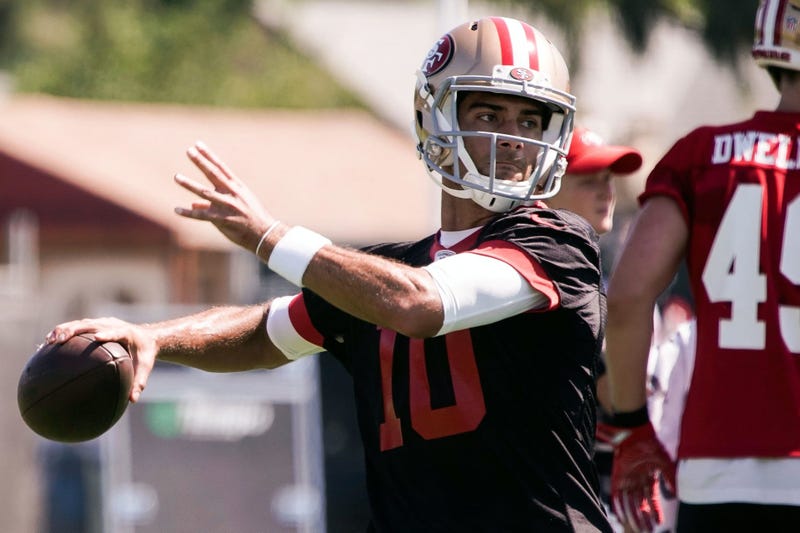 Is there a player in the NFL who garners more hype than Jimmy Garoppolo? Garoppolo generates the same excitement as Kyler Murray or Patrick Mahomes, but their resumes are a bit different. Garropolo has been a darling ever since he subbed in for Tom Brady, but a lot has changed since then and yet the hype still remains heading into the 2019 training camp.

Garoppolo now has his first chance to show he’s worthy of the hype as players report for the first day of the 2019 camp.

Questions are answered in training camp and there are many surrounding the 49ers and on the offensive side of the ball they all involve Garoppolo.

How will Garoppolo come back from injury?

The single most important question in training camp revolves around Garoppolo’s health. How will he respond from his torn ACL? Watching Garoppolo’s movement will be key with a knee brace. The one benefit of Garoppolo’s injury is how early in the season it happened. He should be fairly comfortable heading into camp, but how he adapts will be something to watch.

Garoppolo’s physical recovery will be put under the microscope, but watching his mental recovery will be just as important. Will he become trigger happy? Every time Garoppolo has gotten injured he hasn’t been afraid to step into the pocket and take a hit. Garoppolo has been fearless on the football field, but now with two big injuries in his football career will that change? Training camp is where Garoppolo’s recovery should hit its stride.

Garoppolo’s health is incredibly important, but it’s not the only focus around Garoppolo and the 49ers offense in training camp.

Who is Garoppolo's favorite reciever?

The 49ers receiving corp is filled with a hodgepodge of relatively unknown options for Garoppolo. Back in 2017, Marquise Goodwin arrived as Garoppolo’s favorite, but he too was hampered with injuries in 2018. Outside of Goodwin, Dante Pettis, Jalen Hurd and Deebo Samuel are still relatively new to Garoppolo. Add all that together and you get a lot of unknown. Training camp should serve as the opportunity for Garoppolo to not only build chemistry with the receiver group and hopefully find his new favorite target.

Can Garoppolo's offensive line protect him?

The 49ers have bookends on the corners of the offensive line with Joe Staley and Mike McGlinchey, but the interior offensive line is suspect and that’s scary specifically because of the talent in the NFC West. The 49ers division is stacked with defensive tackles like Aaron Donald, Poona Ford and Jarran Reed. Eyes will be on Weston Richburg, Joshua Garnett, Mike Person and Laken Tomlinson. Garoppolo needs to feel comfortable stepping into the pocket and his offensive line will get a good test in training camp against DeForest Buckner, Arik Armstead, Kentavius Street and D.J. Jones.

Keep it locked on 95.7 The Game for all your 49ers training camp updates.