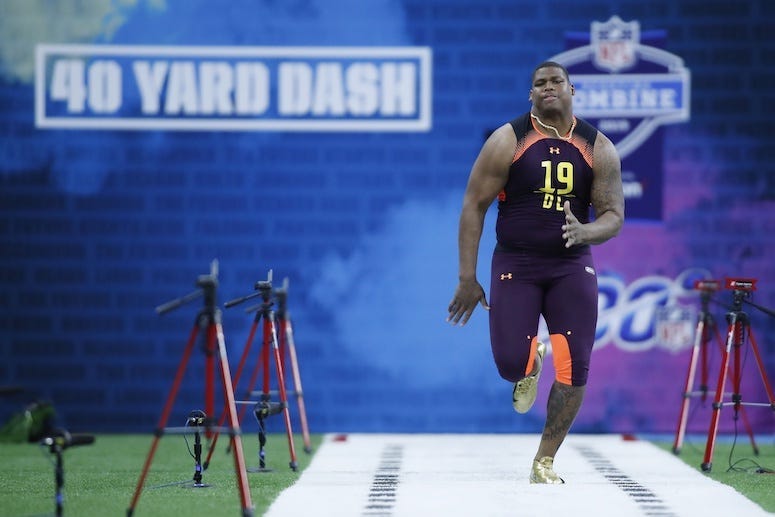 The 2019 NFL Draft is rapidly approaching and 95.7 The Game’s “Know Your Prospect” series is fully underway. Leading up to the draft we will highlight some of the top players, best fits and names you should know for the 2019 draft class. With Jimmy Garoppolo coming back from injury and pressure building for John Lynch in year three the 49ers desperately need to put together a draft haul that can make an impact day one.
Quinnen Williams, IDL, Alabama

There’s no doubt Quinnen Williams is a special athlete at nose tackle, there’s just some things he does that 300 lb prospects shouldn’t do. He has the athleticism, but his hands and feet make him elite. Describing Williams hand usage as violent probably wouldn’t even do him justice. He will punch centers and guards in the mouth on first contact. His burst off the line into just a nasty punch can completely reset the offensive line.

Williams makes things look easy for a 303-pound player and he does so with his quick feet that never stop. Williams generally never wastes a step out of his stance. Everything looks calculated for Williams inside the trenches.

Williams hand usage and footwork paired with his relentless motor put him in position to make plays he shouldn’t. He was consistently all over the field for the tide. The last thing that needs to be mentioned regarding Williams’ athleticism, hands and feet is his incredibly unique ability to close to the football. Williams gets off his block and legitimately closes like a linebacker.

Just demolishes the double team so fast and so easily.   pic.twitter.com/FyB6Tb55gV

Why’d you have to do him like this Quinnen?  pic.twitter.com/m8jsKFoiqt

The best and only way to describe Williams is “dominant.” Let’s say it again, Williams was the most dominant player in all of college football last season. He was the definition of a game wrecker for the Crimson Tide. Double teams, triple teams, tight ends, fullbacks and big rigs couldn’t stop Williams last season. Pro Football Focus gave Williams the highest single season grade they’ve ever given an interior defensive linemen (96.0). Williams placed first in pass rush productivity and run-stop percentage for interior defensive linemen on the Pro Football Focus scale.

Williams earned first team SEC honors, was voted a consensus All-American and even earned Heisman Trophy votes. Williams was the only defensive player to get votes in the Heisman race, and he even earned a first-place vote. Williams also took home the Outland Trophy given to the country’s best interior defensive lineman. Williams was so dominant last season it looked like he was playing against Pop Warner kids instead of the SEC.

An NFL executive told me this week that Quinnen Williams' 15 minute Combine interview in INDY was as good as any 15 minute session he'd seen or been a part of from a defensive lineman before. Broke down opposing offense on film like he was an MLB; owned the room like a QB. @gmfb

Cerebral in The Trenches

The more we find out about Williams the more we see he’s much more than just a powerhouse bulldog in the middle. Williams has the playstyle of a pitbull, but is more cerebral than people give him credit. Williams always has a smile on his face and brings a ton of energy to the field with each snap. Williams looks like an elite prospect on and off the field.

Williams wit comes into play between the line. His approach to each play is impressive for a player with his limited experience. Williams has several pass rush moves that he confuses opposing offensive linemen with. He’ll use double swim moves, spins and his aforementioned hands to get to the quarterback.

According to Peter Schrager, of FoxSports.com and NFL Network’s Good Morning Football, Williams had one of the most impressive classroom meeting sessions at the entire combine.

An NFL executive told me this week that Quinnen Williams' 15 minute Combine interview in INDY was as good as any 15 minute session he'd seen or been a part of from a defensive lineman before. Broke down opposing offense on film like he was an MLB; owned the room like a QB. @gmfb

One of Williams biggest knock is his limited sample size. He only had one full season of dominance at Alabama, and before 2018 he was a backup defensive end. Williams burst onto the scene in 2018, but people are wondering if his success is sustainable?

My question is, has he even reached his peak yet?

You may be able to poke some holes in Williams' experience, but what will happen when he gets more? He’s 21, and has been trying his best to gain healthy weight. Once he gets into a pro workout system his body could fully develop into something scary.

With more experience Williams ability to translate his speed to power will get better, his hands will get cleaner and his creative approach will get smarter. Yes, the NFL’s old guard will question his experiance, but could he just be getting started? Williams isn’t only the most talented player in the draft class he also has the most upside.