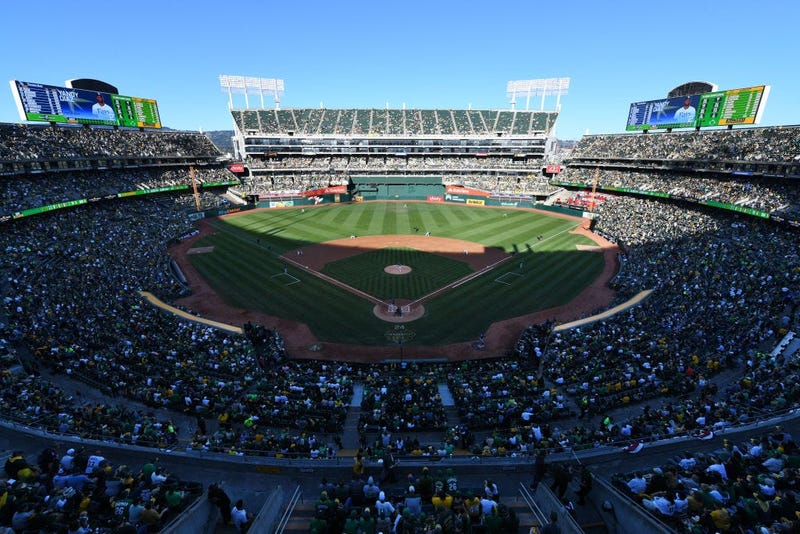 At first glance, it would be so perfectly Oakland if it somehow managed to lose all three of its pro sports franchises — even though it never had a chance to keep the Warriors and couldn't have come up with enough money to save the Raiders.

But the A's? Well, Oakland COULD screw that up because the two political bodies that own the land upon which the Coliseum resides are still bitching with each other about who can sell and to whom — the whom in this case being the A's.

Enter baseball commissioner Rob Manfred with his usual ham-fisted ultimatum, as delivered by Oakland City Council president Larry Reid: If the city and county don't agree to sell the Coliseum land to the A's to help cover the costs of a planned new stadium at Moe Howard Terminal (look it up, kids), he would be happy to help shepherd the team to, yes, Las Vegas.

There are a lot of threats in that threat, starting with sending a major league baseball team to a city that doesn't have a major league baseball stadium and that, to our best research, has shown only the most fleeting interest in a baseball franchise. This sounds, weirdly enough, like Manfred wants to punish Las Vegas as part of the greater goal of punishing Oakland.

In fairness, according to Reid, Manfred also mentioned "elsewhere," in that kind of ominous pro wrestling "parts unknown" way. That could conceivably mean, say, Portland, which is considerably more eager for baseball than Vegas. But Manfred did say Vegas first, which leads a sensible person to assume we are still at the threaten-anything-to-see-the-other-person-blink stage.

Mostly, though, this is just one more example of the left hand (the city of Oakland) and right hand (Alameda County) being so unaware of each other's doings that they just punch each other in the face out of habit. And it is one more example of an outside entity (Major League Baseball) understanding so little about local politics that a threat is supposed to have a huge local reaction. It doesn't, any more than Manfred going to a food truck before the A's-Rays playoff game Wednesday makes him a man of the people.

Put simply, the city and county will founder about as they always do, the A's (who don't really have an outside option that MLB can cheerfully countenance) will grumble and grouse and move from the "Rooted In Oakland" phase to the "Transplanted From Oakland" threat, and eventually we will learn if A's owner John Fisher really does want to build at Howard Terminal at all. Bluffs are being called, fists are being shaken, and we're back where we always seem to be — in the hamster wheel, stuck at the bottom because nobody has the leg strength to get it to move it in either direction.

But it's a long way from Manfred forcing a team upon Las Vegas just because he needs a handy stick. I mean, it is funny to consider Sin City taking Oaktown's hand-me-downs and calling them new and improved, but a sense of humor isn't what it used to be.