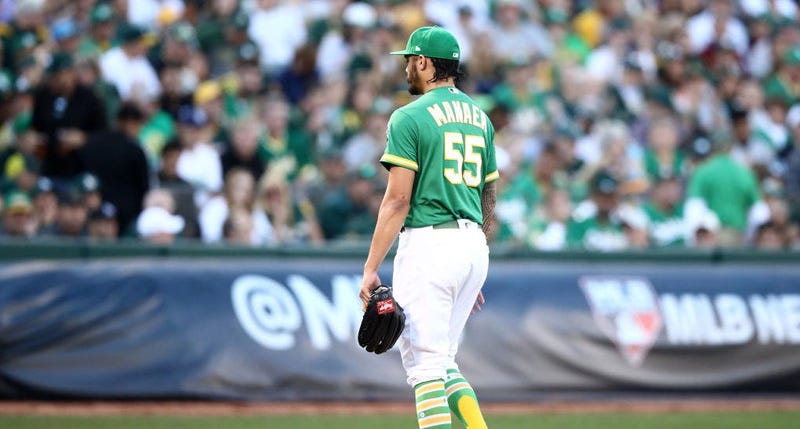 October 3, 2019 10/03/2019 4:03 am
Hours before Yandy Diaz sent a pair of home runs to nearly the exact same spot beyond the right-field wall, wrecking Sean Manaea’s night, and, effectively, the Oakland A’s 97-win season, a reporter from Tampa Bay informed the Rays first baseman that 50,000 fans — the actual number was 54,005 — were expected at the Coliseum.

"There was people with guns when I played in Cuba," Diaz replied.

Diaz proceeded to lead the game off with a shot. His second blast made it 4-0 in the third. That first one, on the fifth pitch of the evening, was shades of last fall in the Bronx when Aaron Judge hit a two-run drive in the first, the opening salvo in yet another elimination-game disaster for the A's.

Cue the Twitter managers playing the results, insisting that the A’s blew it again.

But this wasn’t Liam Hendriks opening in New York.

Bob Melvin, Billy Beane — whoever — made the right call. They just got the wrong result.

And it sank them.

But stop it with the Mike Fiers talk.

To suggest that Fiers should have started is to tell on yourself, to admit you didn’t pay attention to the club before parachuting into the wild-card dud.

Manaea’s September was absurd. He gave his bosses no choice but to give him the nod.

Four runs in five starts. Then, four runs in two-plus innings against the Rays.

Fiers, with a 9-run disaster mixed in, ran up a 7.84 ERA in five September outings.

Plus, Manaea, with his cool, nonchalant demeanor — bordering on aloof — was the perfect dude to thrive in front of a wild-card game record attendance on a win-or-go-the-hell-home stage.

Manaea crumbled against the most unlikely of villians. You're lying if you say you even knew who Diaz was before Wednesday night.

And in the wild-card setting there’s nothing worse than going down early, or, in this case, immediately.

The A’s were blindsided.

It was like one of those war movies where the WWII soldier gets shot in the head. His vision blurs and, suddenly, all he can hear is that ringing in his ears.

The early deficit robbed the A’s of their trademark joy. The looseness was gone. They were tight. And, soon enough, they were done.

If you want to second guess, ask what happened to that offense. Counting the final road trip, the A’s were 2-for-49 with RISP to close out the season. They were 0-for-4 against the Rays.

Or ask why Khris Davis was playing. It’s not Davis’ fault. He hasn’t been right since returning from a left hip/oblique contusion at the end of May.

Davis was 0-for-4 with three strikeouts. After that last one he should have walked right out of the batter’s box, down the tunnel into the clubhouse, showered, changed and headed right to the hospital to get surgery.

For Davis, Manaea, Melvin, and, most of all, the 54,005 fans, Diaz's early ambush and the silent offense added up to an all too familiar result. 0-9 in elimination games in the Beane era.

"See you on March 26," the public address announcer said, as the crowd, with just one thought in its collective mind, spilled out of the Coliseum and into the night.