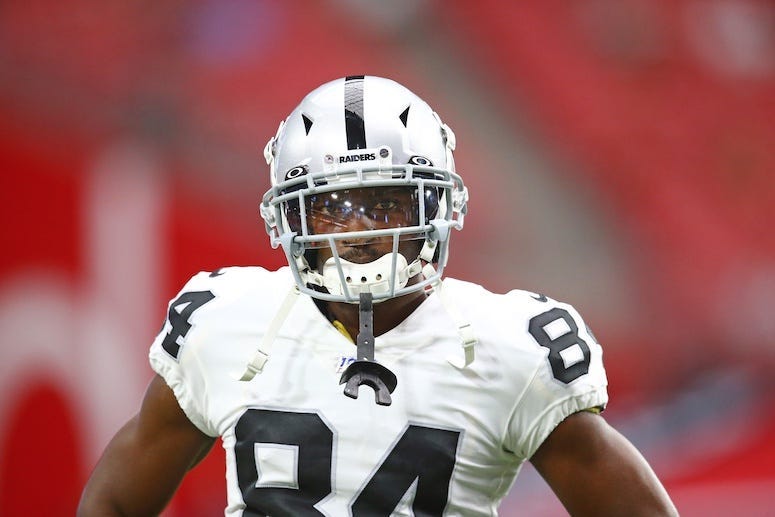 Two day's before the team's Monday night opener, Antonio Brown's Raiders' run is officially over. And his Patriot run is set to begin.

The wide reciever asked for and was granted his release after the team voided his contract by fining him $215K for conduct detrimental to the team, per ESPN's Adam Schefter. That fine was the result of his altercation with GM Mike Mayock.

And that’s fine ! I have worked my whole life to prove that the system is blind to see talent like mines.Now that everyone sees it, they want me to conform to that same system that has failed me all those years. “I’m not mad at anyone. I’m just asking for the freedom to prove them all wrong.” Release me @raiders #NOMore #theyputblindersonahorseforareason #NoMoreFake
A post shared by Boomin (@ab) on Sep 7, 2019 at 6:02am PDT
NFL.com/NFL Network's Ian Rapoport reported that Brown has joined the Patriots on a one-year pact, worth up to $15 million,  Brown confirmed the news on his Instagram and even posted the jubulinet moment when the Raiders cut him loose, exclaiming, "FREE," after reading a tweet from Schefter.
LFG @tombrady #GodsPlan #RewriteStory
A post shared by Boomin (@ab) on Sep 7, 2019 at 2:03pm PDT

“FREE.”This is Antonio Brown’s YouTube video showing the moment he found out he was released. pic.twitter.com/KvLIzHV0sB

On Friday night, Brown had posted an artfully produced video on Instagram which appeared to feature a surreptitiously recorded phone call with head coach Jon Gruden.

With all these false narratives antagonizing me, it’s time for me to control my own narrative. Show the world I’m not the bad guy. Show the world you can free yourself from the lies and become your own person. I am not just AB the football player, I am Antonio Brown, the person, who paved a way for himself to be in charge of his own life. Watch for yourself. Link in bio. Free me! -- @ale.sticktalk
A post shared by Boomin (@ab) on Sep 6, 2019 at 6:42pm PDT
After aplogizing to his teammates and the organization on Friday behind closed doors, and then briefly recounting those words in a super quick press conference, the following happened:

An explanation for why #Raiders WR Antonio Brown was so upset, from AB to me: “Told me do not come in Thursday. Bad my name. Then come work, give two papers after the press conference. No guaranteed no way."

His agent, Drew Rosenhaus, had foreshadowed swift action, via Schefter.

“Now that Antonio is a free agent, we are focused on the future and I will immediately work on signing him to a new team. Antonio is looking forward to a new beginning.”

It's unclear how Brown's new move could impact a potential grievance.

His $29,125,000 in guarantees over the next 2 years will now be determined by an Arbitrator. If the Union files an expedited grievance, the hearing could happen within 7 days. https://t.co/EFkw3K5rHk