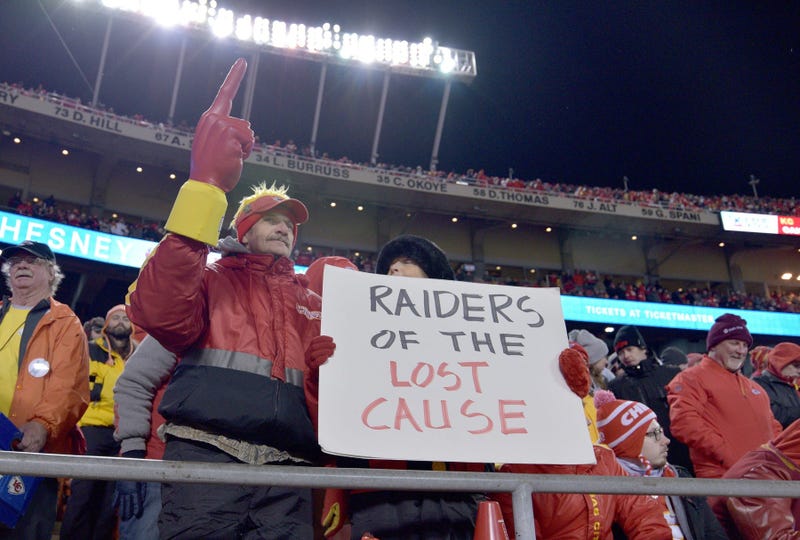 We are finally seeing the ending of the Oakland Raiders, as just as we have come to know them after lo these many years — overmatched and overpowered.

Losing by four and a half scores to the Kansas City Chiefs isn't what they do all the time this year, but it is what they do with disturbing regularity. That they are 6-6 with five lopsided defeats on their resume is the most remarkable thing about them, and it isn't that remarkable if you have to watch it every Sunday.

Everywhere else in the football diaspora, they are just another team that wins by a little and loses by a lot. They cast the same shadow as the Tennessee Titans, which is essentially none at all. Taken as a full season their work has been aggressively average, and they are currently on the outside looking in at one of the least impressive playoff stacks in recent years. They have taken mediocrity and made it even less interesting.

But they are also on the clock in this town, and while they don't care about any of that (or frankly have to), games like Sunday's in which they were essentially obliterated, 40-9, by a more ordinary version of the Mahomes-era Chiefs serve only to re-inform us that they are almost certain to whimper out of town, making a mockery of the links to the area that they forged in happier times.

Put another way, when they lose, they lose so thuddingly that bit almost seems  like they are much worse than your average 6-6 team with a minus-87 point differential. They have won their six by eight, seven, three, seven, two and seven points, and lost the other six by 18, 20, 18, three, 31 and 31 points. Derek Carr, the sad-eyed quarterback who has been rumored to be in Jon Gruden's crosshairs since Day 1 even though he will almost surely be replaced by someone not as immediately good, doesn't even raise the passions that Andy Dalton has in Cincinnati. Their defense is below below-average, and other than running back Josh Jacobs, tight end Darren Waller and defensive end Maxx Crosby, they don't cast much of a shadow. They aren't outwardly angry at their circumstances, they aren't bitching at each other or their opponents, they aren't even making the officials work that hard. Oh they try, leading the league in penalties with 104, but they are less splashy and more administrative than those of their ancestors — lots more holding and false starts, lots fewer personal fouls.

They are ultimately just another team, with a month to go before they indeed go. And whether you love, hate or are utterly indifferent to them, you'd like to see them go up in a cloud of… well, something other than jet exhaust. It is telling that their third quarter, in which they are outscored 91-20 (the second worst quarter by any team in the entire league behind only Arizona's second quarter) essentially kills their ability for drama.

I suppose this had to be the way it ended. Sure the fans deserved better, but they'd deserved better for more than a decade and had become accustomed to not getting anything but worse. Now they're getting just plain bland, and what's the point of that?

Historically, this is usually how teams leave town. For every angry Baltimore Colt or Cleveland Brown diehard jersey-burner from the long forgotten past, there are lots of fan bases that just let their attendance and then their interest fade slowly away. With the Raiders, though, it is the team that is fading away and the fans are trying to decide how many times to fly bi-weekly to Las Vegas next year before the magic of the Southwest Airlines terminal becomes just another BART stop.

Maybe they have a bit of inspiration left in them for these final four desultory weeks. But it's been a bad year for fun in the AFC if you don't have Lamar Jackson or Patrick Mahomes or DeShaun Watson, and the Raiders' contribution has left neither a trace or even a shadow. Carr's future merits barely a shrug, and even if you find Gruden's coaching renaissance a pleasant surprise, the macro view is — well, let's be kind and put it this way. When they're interested, as in a close game, they're still worth the price of your attention. But once it goes sideways, it doesn't come back. They're a 6-6 team that somehow manages to look 4-8 way too often, and they are only serving to disprove the old Bill Parcells adage, "You are what your record says you are."

Sunday, fittingly, Tennessee comes to town. Both teams should wear gray jerseys with gray numerals, and it should rain. At least on the field; the fans deserve… oh hell, at this point there are no more victims, and this all becomes just a choice, doesn't it?