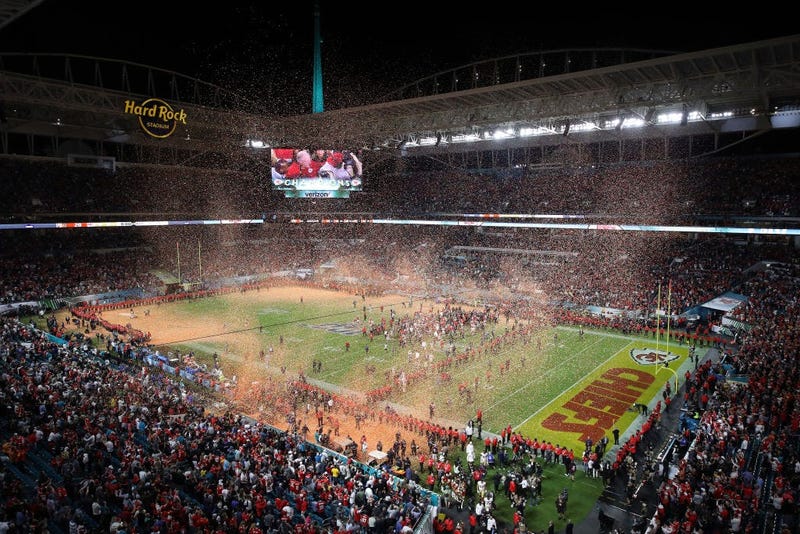 Everyone bet the over, and the under covered. And there's your Super Bowl highlight.

Oh, the right thing happened when Kansas City won Super Bowl LIV, 31-20. They may not have controlled the game until the end, but you all had been warned. They never let the San Francisco 49ers control the game in the first three quarters, certainly not enough to truly dominate the circumstances, and that alone spoiled all the pregame analyses from all the pregame analysts. That alone made the night worthwhile. When the gasbags are wrong, America wins.

And yes, that includes the times when the victim is your favorite team.

Andy Reid wins at last. Patrick Mahomes wins, kind of. Nobody deserves to be the MVP, but he got it because the winning quarterback gets it unless someone else is overwhelming, which nobody truly was. The future of football the Chiefs represented did not triumph as much as the pundits imagined, and the game will end up being little remembered in the annals of America's Christmas.

But it happened, and it happened without a signature moment or a dramatic turn. It was like a hundred Colts-Lions games in that it isn't designed to stick with you for long. There was no moment that defined the game, no commercial that made you rethink the consumer culture, no coaching innovation that made the future come alive, or even a memorable broadcasting insight that forced you to reconsider the sport. It was just a game like a lot of others. The game has not been altered, and the result tells us nothing about the future.

Truth be told, most Super Bowls are like this. The New England Patriots made the Super Bowl a tooth-grinding exercise over the last 20 years, so the Chiefs winning didn't make the nation cringe. They'd waited 50 years to even get here, but nobody on the dais looked like they'd suffered much in the interim. The Chiefs were just a team that outlasted the law of big numbers, and good on them.

And the 49ers? Barely left a footprint, like most Super Bowl losers. There was no egregious error that changed the game, no coaching gaffe that survives the test of logic. Oh, you'll bitch about this or that, of course, but the fact is the 49ers lost because they weren't good enough when teams have to be exactly that. That's all there is. The right thing happened because there weren't enough wrong things that happened. 31-20 is a fairly common score that tells stories of fairly common games.

And in the end, the game was followed by The Masked Singer, and by Tuesday nobody outside Missouri will be discussing it ever again. The 49ers are now the 54th Super Bowl loser in history, and only eight of the previous 53 have returned to the game the following year. Returning will be hard, as it should be, and the scars of blowing a 20-10 lead in the final quarter will stick with each player and coach until they all rise to the next level, metaphorically. They had the Chiefs until they didn't have them, and now they'll never get them back.

The Kansas City parade is scheduled for Wednesday. They didn't steal the parade from San Francisco. They earned it, and you know it.