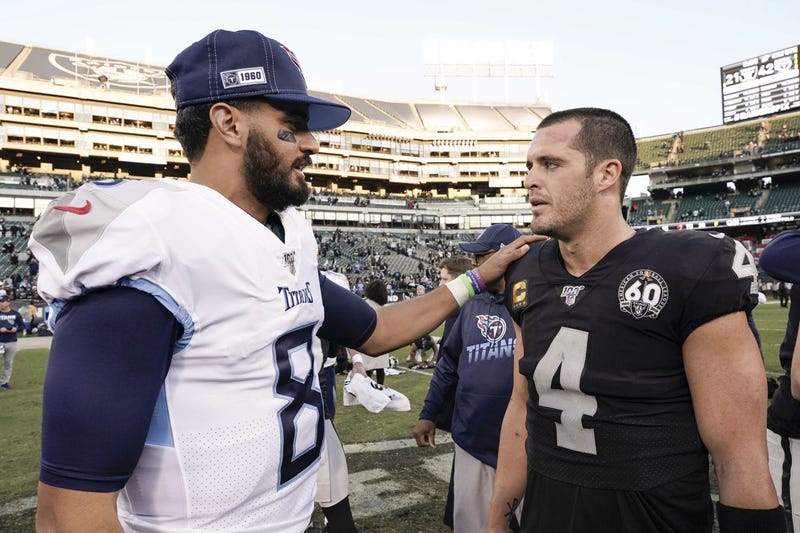 Which is to say Jon Gruden has two guys who know what words mean by struggling not to say them, which as a tool toward benign social interaction is pretty much a non-starter.

So speaking of non-starters, we bring you Marcus Mariota, the former Tennessee Titan brought in to push and/or supplant Carr in Las Vegas if and when the NFL season begins. When asked about his relationship with Carr, Mariota said the painfully correct thing.

"First and foremost, this is Derek's team, and I understand that," Mariota told Rob DiMello of KHON-TV (Hawaii) Tuesday. "I understand that going in. My priority going into free agency was to be a part of a team that I felt could bring out the best in me. Whatever happens, whatever comes of that, I'm ready for. But I do know, to play starting quarterback in the NFL, to be at that spot, is not an easy job to do. And I think when it comes down to it, a strong, stable supportive quarterback room makes that job a whole lot easier, and that's what we have to do. And I'm going to do my best to support Derek in every possible way that I can, and along with that, I'm just going to try to become the best player that I can be and see where that takes me."

It's the same thing that Case Keenum said about Baker Mayfield, and the same thing Ryan Tannehill said about Mariota a year ago, and for you folks who need that pernicious local angle, it's what Jim Garoppolo said about Tom Brady back in the day. It's what the backup says, even when the backup doesn't believe a word of it, which is always. And the starter knows that the backup knows it, which usually creates a wariness between the two. Sometimes… well, often, it leads to quiet simmering dissatisfactions, and if the starter is good enough, it can lead to what happened to Garoppolo — a new job somewhere else.

And it's designed to do that. It's called "creative tension," and is a well-known and oft-used management tool that is largely designed to have one guy eat the other thoroughly enough that the loser can never resurrect his career. Sometimes that doesn't work (Tannehill and Garoppolo, most recently), but most of the time it's a loser-leaves-town match.

In football, this level of head-eyes-and-ears-on-a-swivel is considered normal Darwinian management, and for them it is, well, normal. But the fact is Mariota is merely doing the dance expected of him, and Carr will do the dance expected of him. It just feels more contrived than most such situations because they are both so accomplished at singing the right song and making the accompanying dance seem believable. It isn't, but they have to be seen making it look that way. It's mandated disingenuousness, and it will become wearying before too long.

Unless, of course, the sports programming drought turns it into a rolling reality series on NFL Network. After all, Brady-Garoppolo is still going on and that's going on three years since they parted sub-acrimoniously. Some feud narratives never die even when nobody says anything at all.