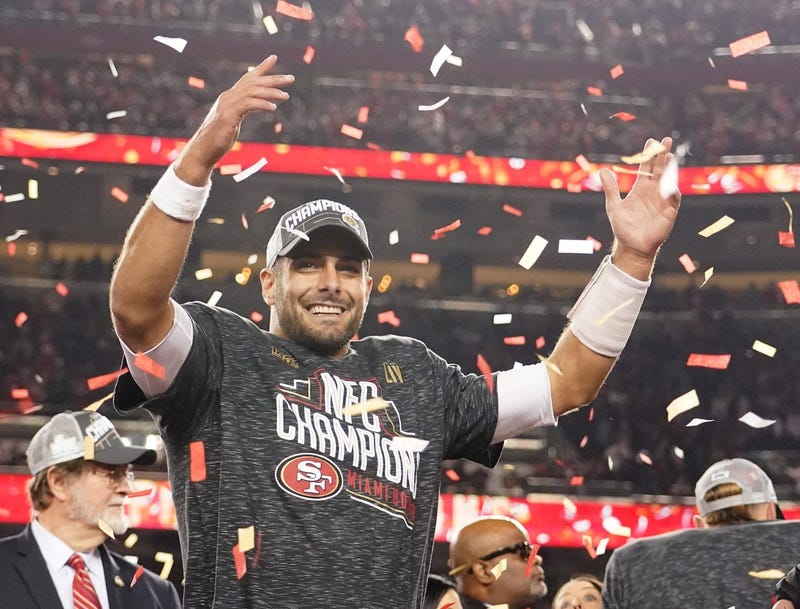 Well, that got your attention.

That, though, isn't the purpose here. The truth is, James Richard Garoppolo is being morphed into Bob Griese, the last quarterback to actually do so little to make so many other things succeed.

Garoppolo's latest effort, the San Francisco 49ers' 37-20 win over the Green Bay Packers in the NFC Championship, was a triumph of minimalism — eight passes. Not completions. Passes. It is the lowest total for any playoff game since Griese threw six balls and then seven in successive games in the 1973 postseason — the year the Dolphins forged the last perfect season in league history.

In other words, we fully expect that Griese tossed back a glass of champagne when Garoppolo threw his final ball of the day, a 10-yard dumpoff to man of the match Raheem Mostert. After all, it takes a village to allow a quarterback to throw the modern equivalent of no passes.

This statistical quirk, though, would mean nothing if it hadn't come after the divisional round victory over Minnesota, in which Garoppolo threw only 19 times, which ranks in the 92nd percentile of fewest passes thrown. Over the past two weeks, in which the 49ers have become the antithesis of modern football, they have thrown fewer times in successive postseason games than any team other those Dolphins.

In short, all the wind and fury you have expended upon Garoppolo as a modern quarterback have been wasted, and all the energy and arm waving you have hurled upon Kyle Shanahan as the most accomplished post-modern coach in the game are just so much nonsense. Shanahan is in fact morphing into Don Shula, who coached even before Shanahan's dad and breezed into the Hall of Fame. In other words, yes, this is a compliment, too.

It's not such that Garoppolo's game management skills are being reduced to completing handoffs (he did throw a league average 476 times in the regular season). But the 49ers' run-pass ratio is a very old-timey 3.3, which is to say that they run the ball three times as often as they throw it, because running the ball works for them in a way that it almost never works for anyone else any more. Now that they face a pedestrian Kansas City run defense in The 54th Big Oom, it seems daft to expect Shanahan to divert from this concept.

Indeed, this championship will be determined by which version of the NFL will prevail — the Chiefs' nuclear options led by Patrick Mahomes, or San Francisco's bone-grinder special. It is in some simplistic ways the difference between the football of 1973 and 2020.

But here's the difference — we have seen Shanahan dabbling with modern football at times this year, specifically Weeks 9 through 11 and then 14 and 15, in which Garoppolo throw well in excess of 30 times to considerable effect. Kansas City has not run the ball 30 times in any game while San Francisco has cleared 40 attempts six times, including the last two.

In short, Kansas City is defining new school ball, and San Francisco is reminding the young'uns that there used to be a thriving old school.

And Garoppolo is doing fine in either because, for all the stupidities that will be uttered in the next two weeks about his inexperience here and inadequacies there, he does not prevent his team from winning things. He just looks a lot more like Bart Starr than John Unitas. Mahomes is clearly the more dynamic and enjoyable watch, the very prototype by which the quarterback of the future is being made. He just looks a lot more like Russell Wilson than, well, Jimmy Garoppolo.

Put another way, Garoppolo will have to throw the ball four times or fewer to break the record for fewest passes in a three-game postseason (Bob Griese and the perfect Dolphins again) while Mahomes will have to throw 74 times to break the record for most (Tom Brady threw 62 times in the 2016 Big 'Un, so it is indeed conceivable). That's a brain-bender right there, and a hilarious one at that.

If it helps you locals, they don't give Lombardi Trophies and make up parade routes on style points. This is going to be a game of warring styles, and if you want one final weirdness, the old style coach is 21 years younger than the new style coach.

So drink up, drink early and drink often. There is going to be a lot of shoveling between now and February 2, and most of it will be in trying to reinvent the basic truth of this game — which is that the adults will root for the 49ers, the kids will root for the Chiefs, and the neighbors will complain about all the damned noise.