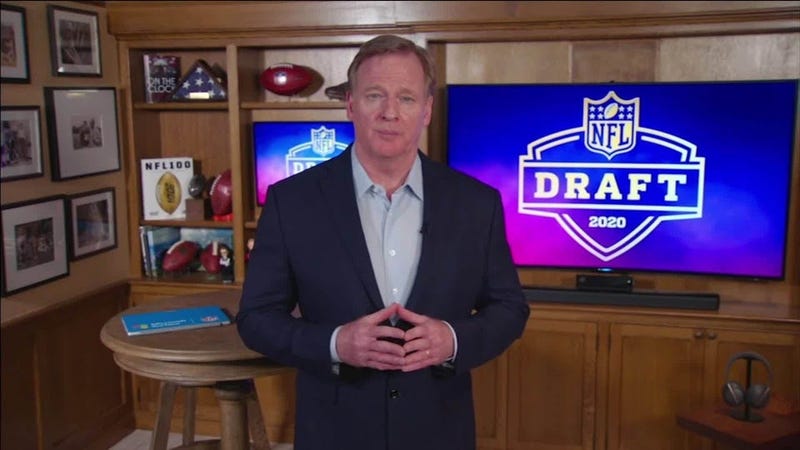 A week ago today, the NFL gave the sports world a gift of sorts.

By conducting its draft virtually, it provided proof that with a little old-fashioned ingenuity and a lot of new-fashioned technology, this “new normal” doesn’t have to be all doom and gloom.

It was simply remarkable. It was done so well, by everyone involved, it almost made you forget the nastiness outside for a few hours.

It also pulled off the nearly unthinkable: It made commissioner Roger Goodell not just tolerable — an exceptionally difficult trick — but likable.

Can’t you see the commish kicking it with SNL’s Stuart Smalley, looking in the mirror (a la Michael Jordan back in the day) and saying, “I’m good enough, I’m smart enough, and gosh darn it, people like me!”

Perhaps boldened by the largely positive reviews of his draft performance, Goodell doubled down on this rare set of circumstances, telling the NFL’s compensation committee he’d be moving forward during this pandemic without drawing a paycheck.

And what a paycheck it is. Goodell’s compensation package calls for $40 million a year. That’s not a typo, that’s not a misprint. Dude makes $40. MILLION. DOLLARS.

I think we can all safely assume that Goodell’s magnanimous act of selflessness isn’t going to put him in the proverbial poor house. He’s been pulling in that obscene amount of glue for at least a few years, so he’s likely got a nest egg of dinosaurian dimensions.

I half thought I was making up another word with “predictive,” by the way, but Hank struck me down on that one, too, cruelly waiting until the “v” keystroke to show it. Clever, I am not.

Hank, by the way, is the helper who lives in my phone. My Hank is your Siri, your Alexa.

Why “Hank”? Because “Phil” was already taken. By me. It’s the alter ego I adopted in college, for use exclusively on the road during baseball season. I was a bit rambunctious back then, and Phil was born so that in the event that I did something really dumb that could come back to haunt me, it wouldn’t. It would ostensibly haunt Phil, but it never would. Because Phil is phictional.

And yes, I just made up another word. For real this time. As I typed it, Hank showed up like a curious Great White Shark — circling and circling, poised to attack — before eventually realizing there’s nothing he can do here. Phictional stands.

Where were we? Something about Roger Goodell being likable, right? Even Hank is on board with this, quickly correcting me as I was misspelling “likeable.” And no, the irony there is not lost on Hank, Phil OR Mychael.

The draft itself was awfully likable, too. It was wonderfully old-school, taking us back to a time when the NFL Draft wasn’t a made-for-TV blockbuster event with so many bells and whistles it was as much about lavish excess as it was about waking up the intriguing sleeper pick with a relentless barrage of suited-up hot takes and highlights.

To borrow a phrase from the many shark documentaries I’ve watched while sheltering, it was nice seeing the draftees in their “natural environment,” at home with family instead of donning an ill-advised suit that looks like something straight out of Post Malone’s closet.

It was like a Casual Friday on Thursday, and Goodell pulled off his part of the show very nicely. He even seemed ... cool.