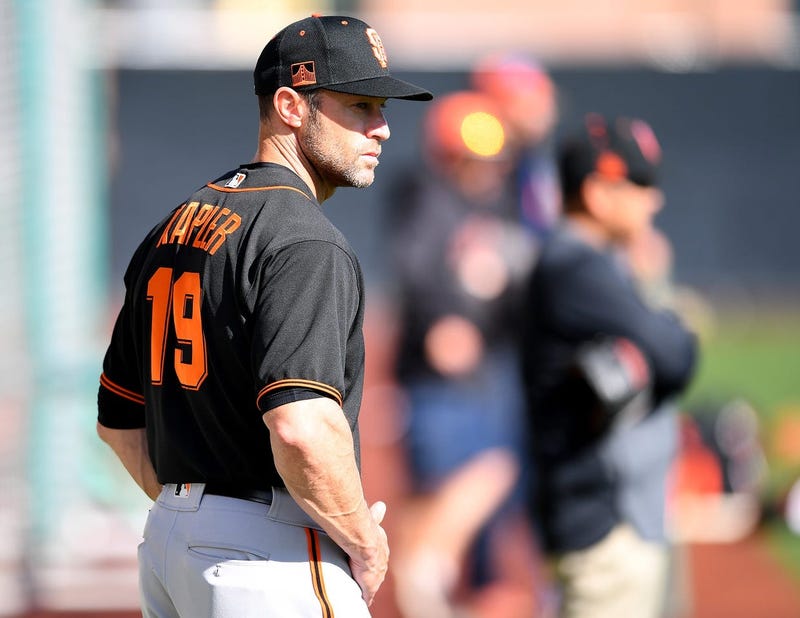 It's been a brutal first year for Simulated Gabe Kapler, to the surprise of roughly nobody. His chirpy optimism and belief in Crypto Farhan Zaidi (and Zaidi in Kapler) has been taken a beating through the difficult start to this imaginary season, and even a relatively good day like Wednesday doesn't change the fact that this faux campaign has begun horribly and has little chance of improving.

And by "relatively good day," we mean "not as unappealing and sucky as normal."

The BaseballReference.com simulation of the 2020 season, using the Out Of The Park Baseball 21 simulation had the Pretend Giants beating Fauxladelphia, 5-1, to improve to 11-20. Trevor Cahill worked into the sixth inning, allowing only an unearned run, and the horrendous lineup, which has only two regulars hitting over .250 and is averaging 3.74 runs per game (or 606 for the season, 72 fewer than a year ago) put up a five-spot for only the 12th time all year. They have hit 19 homers in those 31 games, which paces out to 99 for the year, 68 fewer than last year.

On the other hand, the official Strat-O-Matic simulation, has been even more of a tire fire. Those Giants scored a season-high nine runs in a 12-9 16-inning loss to the Faux-llies that took six hours and 10 minutes, and even hit a home run (Yolmer Sanchez) for the fourth consecutive game. This result, which is unlike the rest only in tone, also puts them at 11-20, but they are averaging barely 2.5 runs per game and are on a pace to finish with 381, the absolutely lowest in franchise history, have been shut out 11 times (a pace of 57, which would beat the old record set by the 1908 St. Louis Cardinals BY TWENTY-FOUR) and barely a homer every two games, the lowest total in a full season since 1943. In both simulations, they end up 57-105.

And this in a ballpark they actually made smaller.

It gets slightly better through the end of May if you believe The Athletic's resident Giants honk, Grant Brisbee. In his simulation, they are 21-34 through May 27, which would get them to 61-101 by season's end, but Brisbee has the benefit of already emptying out the minor leagues to fast-track rookies. And his team is on a pace to score only 523 runs and 109 homers, so its still bleak with a side of horrific.

Oh, and one more thing. The Strat-O-Matic sim provides crowd counts, and God only knows what algorithm they're using for that, and in it the Giants are averaging 33,557 ethereal beings per game, only 1,065 more per game than the Fake A's are drawing in the Not The Coliseum. If you don't think the spectral Giants ownership group isn't hot about that

In other words, in an infinite number of fictional universes, the Giants seem to suck historically in all of them, which leads to today's off-day and a Zoom call in the Phantom Zone between between Zaidi and Kapler. The subject of whether Kapler's methods of running an empty clubhouse are working will come up, and Kapler being the competitor he is, the issue of a roster that is productively worse than any since World War II will also be raised. The possibility that Kapler may be croaked for talking back is in the air, since the manager can't fire the general manager even in a fantasy world.

Or in this case, all the fantasy worlds.

A firing is not expected, and both will most likely say that they are on the same page about the enormity of the task ahead. It's not a good sign, but baseball's gift for regressing to the mean suggests that the Giants might just end the season being really awful rather than galactically disastrous.

But look at it this way. At least in the Bizarro World, they're having a championship-level year, with Mr. Mxyzptlk winning the Cy Young, MVP, Rookie of the Year and Comeback Player of the Year all at once. Just call it pseudo-marketing.