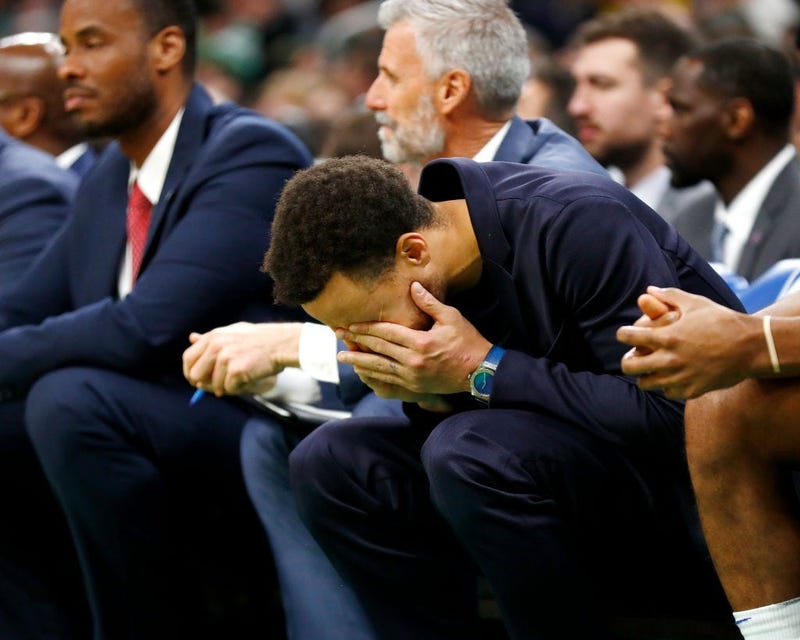 Trading for draft picks is always like buying the dice in a crap game, starting with the fact that the dice you buy might not even have spots.

But it also says, "We need things we don't know more than we need living beings we can see and touch," which is a weird way to do business as well as condition: normal in sports.

So when the Warriors cleaned out most of their serviceable 2020 roster — DeAngelo Russell, Alec Burks, Glenn Robinson Deux, Jacob Evans, Omari Spellman and Willie Cauley-Stein for a first-round pick and five second rounders, president/general manager Bob Myers essentially said, "Nothing this year matters. This is just time we have to kill until we can pretend to have a chance again." Burks and Robinson had been useful and helpful players who could have filled out the bench of the 2020-21 team, Spellman popped in and out, Evans never found a place and Cauley-Stein didn't work at all, but the new Warriors' direction has a more Costco feel — bodies in bulk, or at the very least potential bodies in bulk. It makes clear the idea that nothing about this season should be taken as true or valuable, and let's be honest, going 19-63 (their projected final record based on their current record) should be disregarded in all ways at all times.

It's what baseball people used to call in their player-demeaning way a cat-and-dog deal — you give me a pet, I'll give you a pet, and our lives will be otherwise unchanged. Only the Warriors struck three times in search of a pair of hot dice.

But the truest truth here is that the truest believers who wanted to project this year's hot mess into parts of a more coherent whole now know that none of it matters at all. The Warriors want to see more of two players they asked too much of too early, Jordan Poole and Alen Smailagic, but other than that, all you got was overtaxed Draymond Green and underhealthy Kevon Looney. It's been every bit as bad as you feared, plus 20 percent, and 2019-2020 is being willed out of existence entirely.

That is, unless you think they have plans for Wiggins, who frankly seems like modified Russell and short-time boarder in a hotel that suddenly specializes in turnover.

If, on the other hand, you like to play at being a general manager (and that's an admission of psychoses yet undiagnosed), you always love the draft choice because it's a great play toy until that horrible moment when it has to be attached to a human being. Anonymous assets are always the best assets because they have no limitations, and you can pretend they are the next LeBron James. Draft choices are the lie you tell yourself that make sports more fun and less real. And now the Warriors have six more than they did a week ago, so call this a magician's victory — smoke and shiny things that can't be identified.

In an unrelated event, Andre Iguodala might break out his new clothes in San Francisco Monday night when the Miami Heat, for whom he now plays, come play said Warriors, and we'll see how he engages a new city and most of the same fans, all new opponents and the same coaching staff, and two guys in civvies (W.S. Curry and K.A. Thompson) with whom he got close. It'll be weird, but at least he never got emotionally attached to Russell, Spellman, Burks, Cauley-Stein or Robinson and barely knew Evans, let alone the half-roster of draft picks that as we all know will end up being versions of Giannis Antetokounmpo, Damian Lillard, Kawhi Leonard, Kemba Walker, Rudy Gobert and Anthony Davis. After all, if you're gonna lie to yourself, lie big. Lie very very big.