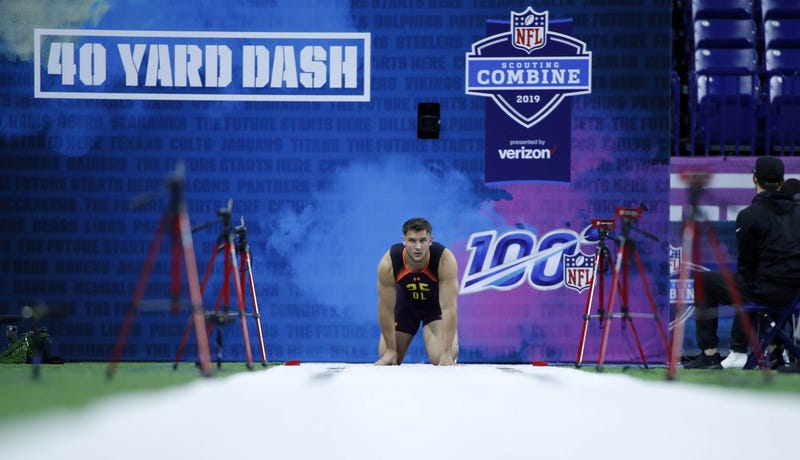 April 25, 2019 04/25/2019 9:21 pm
It’s officially official, Nick Bosa, the wire-to wire consensus No. 1 overall prospect is a San Francisco 49er. As deep as this draft class is, it lacks elite talent on paper, a lot of really good players, but few elite — luckily for the 49ers, general manager John Lynch just selected on of those guys.

The 49ers have been desperately searching for a edge rusher since Aldon Smith. Now, they don’t only have one, but two by drafting Bosa to pair with Dee Ford. The Philadelphia Eagles laid the roadmap for never having enough talented defensive linemen and now the 49ers boast Ford, Bosa, Arik Armstead, DeForest Buckner and Solomon Thomas.

The 49ers defensive line has been a mockery in years past, but with one draft pick like Bosa it’s turned that unit into one of the most lethal groups in the NFL. Bravo, Mr. Lynch you got the right guy in the former Buckeye.

Now who is the newest 49er? Let's take a look back at our "Know Your Prospect" profile on Bosa.

Nick Bosa may have some of the best hand usage we’ve seen from a college pass rusher in recent memory. He has the hands of a savvy veteran throughout his rush approach. Bosa doesn’t just use his hands to create separation at the point of contact, he uses them relentlessly through the entire rush. Bosa keeps offensive linemen at a distance with his leverage and can become untouchable with his different technical stabs.

Bosa seems to have an approach with every rush that will often keep offensive linemen confused. He uses his athletic traits to set up his rush then attacks with hands that don’t stop. Bosa has an extensive pass rush repertoire that’ll rival some NFL all-pros. He can attack offensive linemen with a polished array of moves like chops, rips, clubs, push-pulls and anything else you want to call it, but whatever it is, I bet Bosa will be successful with it.

This is what makes Bosa special. He has all the other traits like athletcisim, size and speed you want out of a top-tier edge rusher, but his hand usage make him elite. When it comes to rushing the passer Bosa is extremely refined in his attack for a player his age. Bosa’s pass rush style makes it easy to think he can step in and challenge for double-digit sacks in year one. Bosa is the cure to the 49ers desperate need of an outside pass rusher.

The hands never stop with this guy. A1 refinement. pic.twitter.com/Ww3j3c9wvY

Did this Center ever have a chance? pic.twitter.com/4FOGf4AryQ

More Than a Pass Rusher:

It’s rare a college pass rusher is heralded for their run-stuffing ability, but Bosa is a straight up bulldog in the run game. He’s a true four down defensive linemen, which is the type of player the 49ers will need with their shiny new wide-nine defense.

The acquisition of Dee Ford will provide a new dynamic to the 49ers defense, but Ford is primarily used as a speed rusher. Ford isn’t awful in the run, but Bosa would solidify the edge for the 49ers rush defense. Bosa easily stacks up defenders with his leverage ability at the line of scrimmage. It can be surprising to see how easy it is for Bosa to stand up offensive linemen with his power and leverage.  Bosa can redirect runs time after time with his ability to stone offensive linemen and clog gaps. Bosa posted a Pro Football Focus grade of 91.4 in 2017 when he played a career-high, 195 run plays.

Adding Bosa to a defensive line with Arik Armstead and DeForest Buckner would give the 49ers a stout run defense up front. In a division with Todd Gurley, David Johnson and Seattle’s loaded backfield, run defense should be a priority for the 49ers.

Don’t doubt whether Nick Bosa can play the run. Look how quickly he stacks and sheds offensive lineman to make a tackle in the backfield #osu #OhioState #BuckeyeNation pic.twitter.com/fJvoz9QHtg

You should know by now that Bosa comes from a football family. His brother Joey, is a stud for the Los Angeles and his father, John, was a first-round pick by the Miami Dolphins in 1987. Bosa grew up around the game and it shows up on the field. Bosa checks off on some intangibles like awareness, motor and football IQ. Bosa is very aware on the football field. He’s a technician that doesn’t waste steps and plays with a purpose at the line of scrimmage.

Bosa always knows where he is on the field, even in the pass rush he has a very unique sense of timing and angles. He tends to cut the corner at the perfect time in his pass rush set. Bosa also has some of the best timing in his approach you'll see from a prospect. He understands when to attack offensive linemen, whether that be using shuffle steps off the line of scrimmage or hesitations to set up the perfect timing in his rush.

Bosa has a sixth sense on the football field that you have to believe he was born with. He easily filters through the trenches to find the football in every situation. Nothing ever seemed to confuse Bosa while he was playing in the Horseshoe.

Having growing up on the field, Bosa should understand what it means to be a professional; he shouldn’t have as many hiccups as the typical rookie.