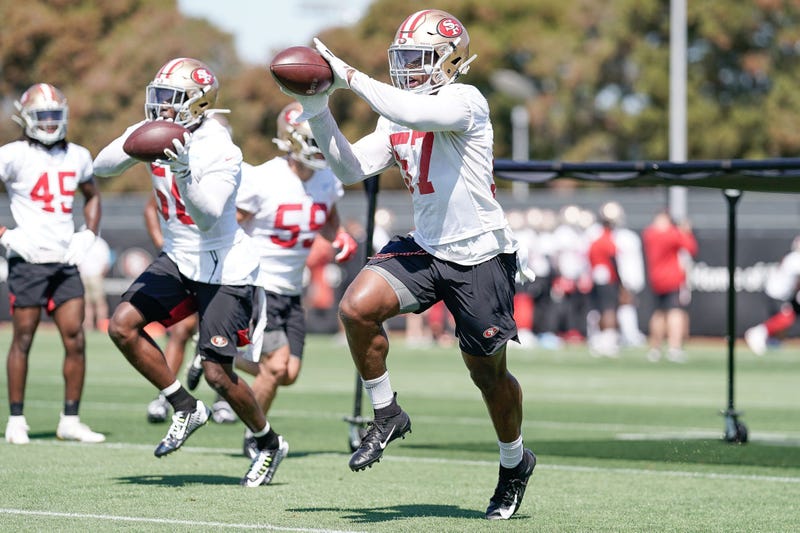 The first day of padded practice brings an extra sense of physicality to the field. You can hear cracks of should pads and helmets all across Levi's Stadium. With the pads on one position battle comes more into focus — offensive line vs. defensive line.

There’s no faking it in the trenches, it’s your best vs. his best in a one-on-one situation.

O-line hangs with the D-line

The initial padded practice gave the 49ers offensive line their first opportunity to face off against the newly revamped defensive line. There’s been a lot made of the D-line with the money spent on Dee Ford in free agency and the selection of Nick Bosa. The offensive line, meanwhile, is flying under the radar.  The offensive line that gave up 24 sacks last season looks largely the same, while their defensive line is cast full of first-round picks and highl-priced free agents.

Even with the star power added to the defensive line the offensive line held their ground throughout today’s practice. Mike McGlinchey, the 2018 first-round pick, went up against Ford in today’s one-on-one edition of practice and held upwell. McGlinchey looks strong heading into his sophomore season and head coach Kyle Shanahan has noticed.

“He’s a guy who is very conscientious. He’s very smart, and he’s very hard on himself,” said Shanahan.

And forget about a sophomore slump.

“I don’t see it in him.” Shanahan added.

#49ers’ Dee Ford tries to set up a chop/counter-spin to the inside but McGlinchey blocks it perfectly.@mmcglinch68 see’s the inside move coming and jams him before the move could be executed. pic.twitter.com/F3dNsSgEMM

Guard Laken Tomlinson is coming off an MCL injury and looked solid against DeForest Buckner in one-on-one drills. Tomlinson stifled Buckner’s power rush up the middle in one rep. On Friday, Buckner mentioned to media that Tomlinson is one of his favorite teammates to line up against because of the challenge.

On Day 3 of camp, the offensive line fared well against the 49ers high priced defensive line all without Joe Staley on the field due to a veteran’s rest day. Tuesday we should get a glimpse of Bosa vs Staley in pads before the team’s first off day on Wednesday.

If the 49ers offensive line can continue to perform well it will change the complexion of their roster. The 49ers have bookends on the corners with Staley and McGlinchey, but the interior is a question mark especially with Weston Richburg on the PUP list. It's the smallest of sample sizes, but After one day of pads, the offensive line looked the part.

In one 11-on-11 session the pocket collapsed and Jimmy Garoppolo took off on a scramble down the field for a 15-yard gain. While many held their breath as the recovering quarterback took off, Shanahan said he was happy to see Garoppolo move the way he did.

Garoppolo’s willingness to step out of the pocket and run while recovering from injury is a good sign on his mental recovery. There’s no doubt Garoppolo has grit and his injury hasn’t slowed him down.

Dre Greenlaw, the fifth-round draft pick out of Arkansas, had a fantastic day for the defense in Santa Clara. Greenlaw was seen flying around the field to the football on almost every rep he was in. Greenlaw is extremely quick, but lacks size for an every down backer, so there was questions on how he’d do shedding blocks at the next level. Greenlaw showed he can bang in the trenches and used his speed in coverage.

Greenlaw will be competing with Malcolm Smith for the SAM linebacker position next to Fred Warner and Kwon Alexander. The 49ers already know what Smith is and Greenlaw has the potential to bring a new dimension to the defense.

Trent Taylor came into the league impressing as a rookie, but dealt with injuries and inconsistencies as a sophomore. Since camp has started, Taylor is back to impressing. He had a solid practice Sunday with a long touchdown and looked good again in pads. Taylor caught a few slants and intermediate routes over the middle from Garoppolo. Taylor looked like one of the most targeted wideouts in camp today. Shanahan said their excited about Taylor’s progression from last season. “He came back even better.” said Shanahan.

The 49ers receiver group is crowded with two rookies and veteran Jordan Matthews added to the mix. If Taylor continues to string together more practices like the past two days, we will be in for a serious competition for reps in the receiver room.