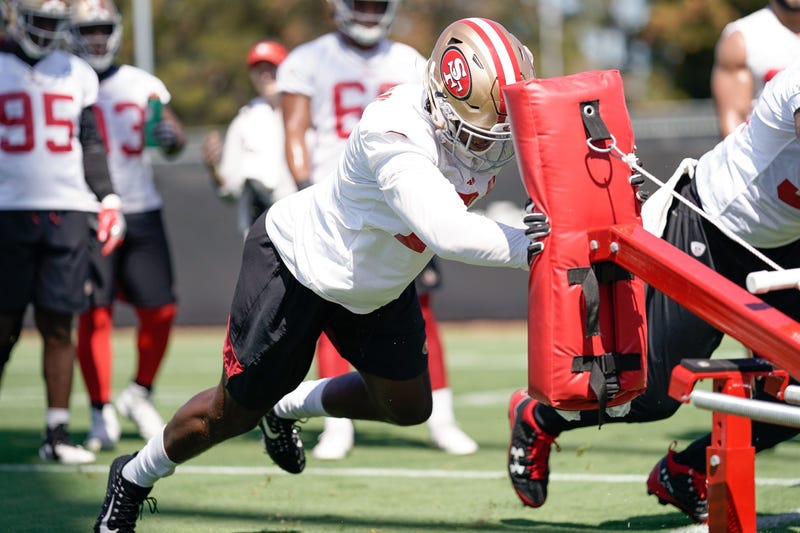 Similar to practices of the past, the 49ers defense edged the offense on Sunday in Santa Clara. Day eight of training camp included tipped passes, tackles for loss and interceptions. Kyle Shanahan said the defenses advantage in camp starts with the defensive line. “They’re getting to the quarterback a lot faster,” said Shanahan.

The offense was able to string together some positive plays later in practice, but the defense finished strong after rookie Nick Bosa forced a fumble from Tevin Coleman that lead to a scoop and score touchdown on the final play of practice.

Rookie Dre Greenlaw has flashed all training camp, but Sunday might've been his best day. Greenlaw intercepted a pass from CJ Beathard, had a pass deflection while covering George Kittle and snuffed out a screen pass. Greenlaw was flying around camp and seems to be gaining the attention of his teammates. Teammates like Fred Warner and Kwon Alexander flew to Greenlaw after his interception and seemed to be hyping him each time he left the field.

Greenlaw is right in the mix for serious playing time next to Warner in the linebacking corp. Malcolm Smith has yet to make an impact as a 49er and outside of Warner and Alexander there's no clear cut favorites for the other linebacking positions. Greenlaw will be a player to keep an eye on as the exhibition season begins to see where he lands on the depth chart.

One area of concern for the 49ers so far in camp is the center position. With Weston Richburg still on the PUP list and no clear timetable set for his return the 49ers have turned to veteran Ben Garland. Garland got blown up by D.J. Jones on the first play of the 49ers 11-on-11 scrimmage where Jones was easily able to stop Coleman in the backfield. In one-on-one drills Garland didn’t have a fair showing either.

The other center in camp getting reps is Dillon Day who was signed when camp started. Day has bounced around the league since. He entered the NFL in 2015 with most of his experiance coming from the practice squad.

In a division with Aaron Donald and Poona Ford, the 49ers need to up the interior of the offensive line if Richburg can’t go. The 49ers could be a team that monitors the center waiver wire as camp cuts begin.

Garoppolo’s favorite target on Sunday was wide receiver Trent Taylor. Taylor's had a strong start to camp and it didn’t stop on Sunday. Taylor looks like his rookie-self now that he’s fully recovered from a nagging injury that hampered his sophomore season. Taylor caught about five passes in 11-on-11 work from Garoppol,o with two being rather acrobatic receptions. Garoppolo seemed to be looking Taylor's way whenever he was on the field.