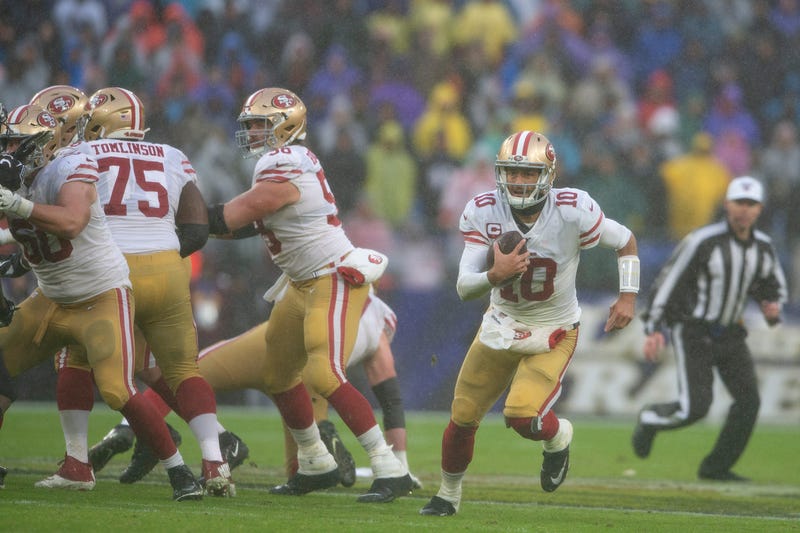 The 49ers traveled to the “Charm City” and dropped a tight game to the Baltimore Ravens, but the result of the 20-17 loss to start December shouldn’t be the headline. Even in a loss, Kyle Shanahan’s squad underscored what they’ve been showing the entire season — the 49ers are one of the best team’s in the NFL.

The 49ers went into Baltimore against the MVP frontrunner, Lamar Jackson, in the 10 am timeslot on the East Coast, during a rainy mess, and lost via a walk-off field goal from Justin Tucker in the final seconds.

The Ravens have put together one of the league’s hottest streaks with elite play from Jackson and their improving defense. Baltimore has averaged 43 points over their past four games behind 13 touchdowns from Jackson. The 49ers limited Jackson to only 105 yards passing, and the Ravens to only 20-points — a feat the New England Patriots, Seattle Seahawks, Houston Texans and Los Angeles Rams weren’t able to do.

After the game, Shanahan seemed reasonably positive, suffering his second loss of the 2019 season.

“I was real proud of the team,” Shanahan told reporters in Baltimore. “I thought they played extremely hard — all three phases — definitely played against a real good team, but I was real happy with our guys and how we played — we had every chance to win that game, but came up a little bit short there at the end, give credit to them — hopefully we can earn another opportunity to get a chance to play them again sometime.”

The 49ers two losses have come to two of the top teams in the NFL by a combined six points — Shanahan’s squad is proving they can hang with elite teams in any situation. Rewind to the start of the season, and the general idea of the Ravens and 49ers playing each other in the Super Bowl would be laughed at, now in December, the two teams lived up to the hype of a Miami preview in a heavyweight style fight.

There were several positives against Baltimore, like Robert Saleh’s defense slowing down one of the league’s best offenses and Raheem Mostert going for 146 yards on the ground. However, it was still a loss, and a few head-scratching plays decided the 49ers' loss to the Ravens.

Shanahan mimicked the aggressive style of his opposing coach John Harbaugh, deciding to go for it on fourth down with the most crucial decision coming on the 49ers final possession. Shanahan opted to go for it on the Ravens 35-yard line with six and a half minutes left in the game and never saw the football again. It’s not the decision to go for it that was bothersome; it was the execution.

This game was full of power football, and Shanahan drew up a pass play to George Kittle from the shotgun to convert the critical fourth down,  instead of sticking with Mostert, who was averaging a whopping 7.7 yards-per-carry.

The key play to me was this 4th and 1 play in the 4th.The #49ers failed to run in a crucial spot despite running great all day.Definitely have to learn from these mistakes for the playoffs. pic.twitter.com/EpAUPhUaLC

After the game, Shanahan stuck by his decision to throw the rock instead of going back to the run on fourth down.

“They just put too many people in there to block — too many that you can block — it’s what we’ve seen all year on them, that’s what they did there too,” said Shanahan. “We didn’t mind the decision at all in not running, but I wish I called a better pass play.”

Being aggressive is an excellent trait for a head coach, and something you need to be to win in the NFL.

But in this case, the execution was off for Shanahan.

The 49ers wouldn’t have been in that position if Shanahan wasn’t bold earlier, passing on fourth down to Deebo Samuel at the start of the game, or sneaking Jimmy Garoppolo at times. No matter pass or run, coaching aggressively on fourth down is something all teams have to live and die with it. If the 49ers we’re able to convert the pass and continue the drive, this story would only contain praise for Shanahan.