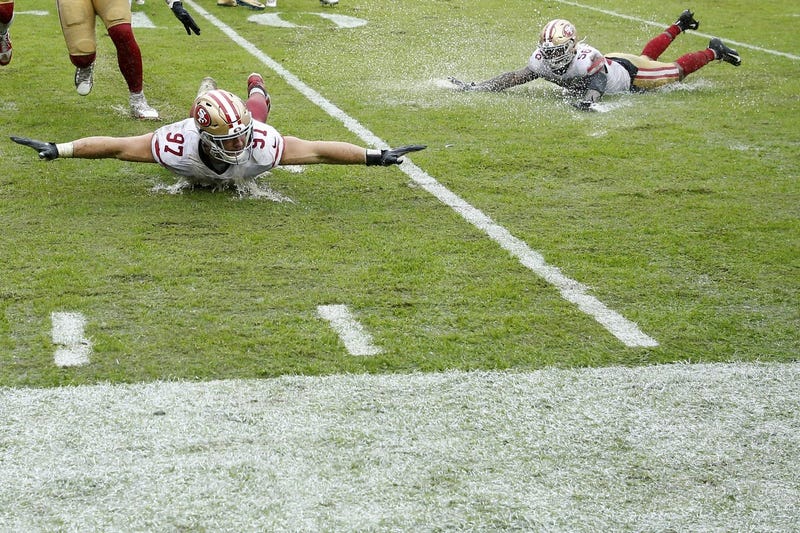 It wasn’t pretty, but when it mattered most the San Francisco 49ers closed out the Washington Redskins to move on to 6-0 for the first time since 1990.

The field was a sloppy and rainy mess that bled into the pace of the game. The game was tied at zero heading into halftime. The 49ers seemed to be playing to their opponent’s level. The Redskins are at the bottom of the NFC standings, but it was tough to tell what team was undefeated and who was 1-6 in the first half.

Garoppolo was perfect down the stretch to give the 49ers the lead. Garoppolo went 8-8 for 113 yards after throwing his interception.

The 49ers were able to set up Robbie Gould for three easy chip shot field goals in the second half to seal a 9-0 victory.

It’s not easy to hit big throws in the type of conditions the 49ers were playing in, but Kyle Shanahan was proud of the way Garoppolo stepped up when his team needed him.

“I thought he made big throws when he had to,” said Shanahan.

Garoppolo didn’t stuff the stat sheet and he did make some mistakes, but more importantly, he did what it took for the 49ers to win.

Garoppolo’s best weapon today was his legs. He scrambled for a first down and was able to create time in a messy pocket.

Garoppolo’s reliance on his feet was a positive sign for the quarterback who is still recovering from an ACL injury last season. Garoppolo looked comfortable even with the rain pouring down on one of the worst-kept fields in the NFL.

Even if you weren’t impressed with Garoppolo’s gritty performance, you can’t take away that he’s now 14-2 as a starting quarterback in the NFL.

On the other side of the football, Kwon Alexander put together one of his most impactful games of the season. Alexander iced the Redskins best drive of the day by forcing an Adrian Peterson fumble late in the 3rd quarter.

— San Francisco 49ers (@49ers) October 20, 2019 The defensive line, Richard Sherman and Robert Saleh get a ton of credit for how the defense is playing, but Alexander is the glue in the middle that’s holding it all together. Alexander has been one of the best free-agent signings of the summer.

Alexander and the 49ers dropped a goose egg on Case Keenum and the Redskins offense. The defense pitched its first shutout since September of 2016. Saleh’s defense has only allowed 10-points in their last three games combined.

— NFL Research (@NFLResearch) October 20, 2019 Even with Garoppolo and the 49ers defense leading the way the headline will go to the weather. It was wet and muddy, but the reaction after the game was all positive. Many 49ers players spoke about how much fun they had in the slop. Even Shanahan mentioned wanting to jump in the postgame slip-and-slide celebration.

Kendrick Bourne and Nick Bosa each said how much fun they had in the “mud bowl.” While George Kittle exclaimed, “I had a blast out there!”