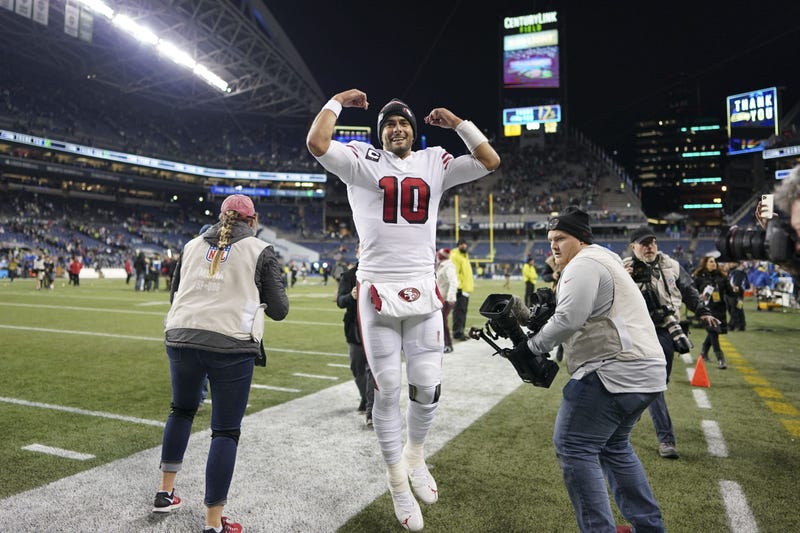 As great as all that sounds and looks, one massive incomplete challenge loomed over Shanahan and Garoppolo — win in Seattle against, the boogie man, Russell Wilson. It came down to the final defensive snap, but in the end, the 49ers their Seattle demons to seal a first-round bye and home-field advantage through the NFC playoffs. A sentence that's sobering to write considering Shanahan's squad finished with four wins and was looking at the number two overall draft pick. 365 days ago.

The 49ers jumped out to a commanding 13-0 lead in the first half, but the game was all but over, as Wilson did his thing to get Seattle back into it. The Seahawks scored two fourth-quarter touchdowns to get within five points of the 49ers in the game's final minutes.

Shanahan's offense couldn't deliver to ice the game and had to punt the ball back to Wilson and Seattle with a little over two minutes remaining in the final period — a chilling thought for 49ers' fans everywhere.

Shanahan said after the game that even he knew to give Russell the ball back in that situation was an accident waiting to happen. Still, his defense stepped up when it mattered most.

"I think everyone's seen Russell do that a lot of times— when he was getting going there in the second half — felt like we had to score to keep him from doing that, cause you could tell he was getting hot," said Shanahan. "I knew we were in trouble offensively, but the defense they let them get all the way down there and let it get close, but they made the play to win at the end and got the job done."

The situation was magnified, considering the 49ers defense has wilted over the past couple of weeks. However, with their back against the wall — and a little help from a puzzling mistake from Seattle, the 49ers bent but didn't break.

After completing a crucial fourth down to set up first and goal with under a minute remaining, the Seattle Seahawks trotted Marshawn Lynch onto the field, only to have their moment spoiled with a befuddling delay-of-game penalty to push them back off the goalline. Lynch left the field as the Seahawks were forced into a different personnel grouping.

The game went down to a fourth-and-goal pass from the hands of Wilson to tight-end Jacob Hollister. Yet, rookie, Dre Greenlaw laid a game-winning tackle at the one-yard line to complete the 49ers' improbable season with the NFC West crown.

Greenlaw's heroic tackle earned him a game ball from Shanahan.

"I think definitely Greenlaw deserved one at the end; if he doesn't make that play, we don't win that game."

A total of 21 points has decided the 49ers' last five games, and Shanahan is surprised by the way his team is still able to find new ways to win.

"We've had to win a lot of different ways now — I keep feeling like we've done it every way possible, then we find a new way to do it," said Shanahan. "I wish it wouldn't have been that close at the end, but it doesn't matter now — I'm pumped how they finished it."

The 49ers now get a chance to sit back and rest up till they open the playoffs January 12 at Levi's Stadium, but Shanahan isn't celebrating yet.

"We all know there's only one team that's happy at the end of the season," said Shanahan.

Although it may feel like a massive weight off the 49ers' shoulders to win a game in Seattle — their fight against Wilson and the Seahawks could continue if Seattle beats Minnesota in Wild Card weekend, they could travel back to Santa Clara for round three.