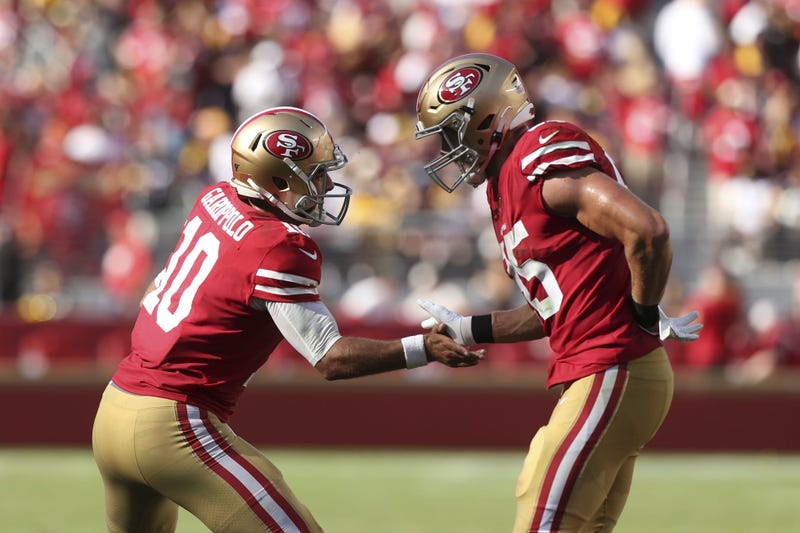 The San Francisco 49ers are playing their best football in the Kyle Shanahan era. They're currently atop the NFL with the best record in the conference. Outside of some injuries and a couple of sloppy wins here and there, they’ve been close to picture-perfect.

If you’re a 49ers detractor, your ammo against the team comes from their strength of schedule. The 49ers have beaten a trio of teams who look just okay and that’s putting it kindly. The 49ers win against the Tampa Bay Buccaneers in week one might be their best win, but still, there’s been a lot of “they’ve played nobody” statements when talking about the 49ers.

That’s fair— the 49ers opponent’s record sits at 3-9. Each team they’ve played the 49ers have been expected to beat and they’ve crossed them off the list. The 49ers can only play on who is in front of them.

If the thought is that the 49ers are supposed to be a playoff team then they should beat these subpar teams and they’ve done that. Through the first quarter of the season, the 49ers have handled business.

In week five, on Monday Night Football, the business comes to them with the new-look Cleveland Browns.

With the 49ers record being at 3-0 they’ve received a lot of hype, but no team in the NFL has been more hyped than the Cleveland Browns. The legend of Baker Mayfield and the addition of Odell Beckham JR. was talked about like something out of a comic book.

The Browns hype hit a freight train in Week 1 when they lost at home to the Tennessee Titans 43-13. Mayfield threw 3 interceptions and their touted defense gave up a 40-spot. After a wonky start to the season, the Browns have scratched their way back to a 2-2 record with a big win last week against the Baltimore Ravens and the hype is officially back.

The two early-season losses have set the Browns on a path of desperation that’s now heading towards Levi’s Stadium. The Browns are hands down the best opponent the 49ers have faced this season and it provides an opportunity for the 49ers — a statement win.

The 49ers need an opponent like the Browns. They need to prove to not only everyone but themselves that they’re as legit as their record says. A win against the Browns gives Jimmy Garoppolo and Kyle Shanahan the clout they deserve.

The Browns provide a test the 49ers haven’t had yet this season. Specifically, two of the 49ers' weakest units will be challenged.

The 49ers offensive line has exceeded expectations to this point, but now they face a nasty defensive line that can make Garoppolo’s life very difficult. It starts with limiting Myles Garrett, but it doesn’t stop there. Larry Ogunjobi, Sheldon Richardson and Oliver Vernon are all dangerous. The 49ers offensive line has had over two weeks to prepare, but rookie Justin Skule may still be a liability. We will find out how talented Garoppolo’s protection is on Monday.

The other unit that will be jolted into the limelight is the 49ers banged-up secondary. The Browns have one of the best and, loudest receiving corps in the NFL. Beckham and Jarvis Landry are the headliners, but Rashard “Hollywood” Higgins and Antonio Callaway can hurt you. There’s a good chance Mayfield tries to pick on the backup turned starter, Emannuel Moseley.

The bottom line is the 49ers need this challenge. They need to prove to themselves and everyone else they are legit and a win against the Browns on Monday Night Football does that.