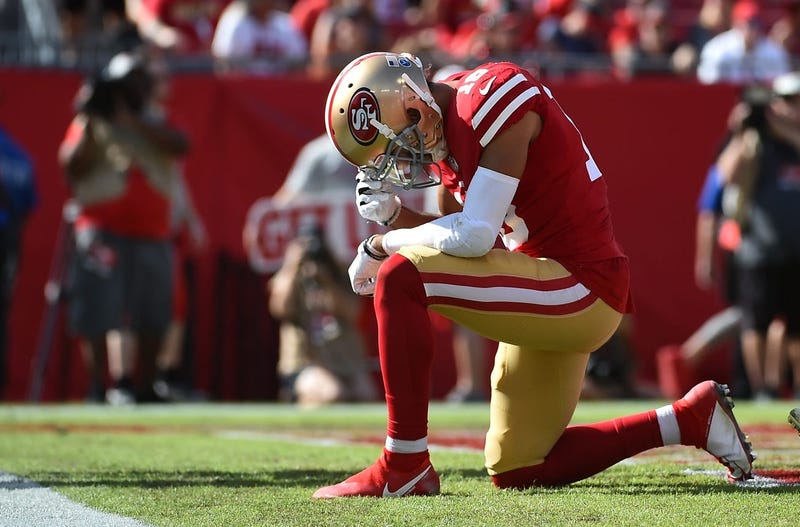 When the San Francisco 49ers traded up to grab the University of Washington wide receiver Dante Pettis in the second round of the 2018 NFL draft, a high expectation was set. Pettis grabbed a touchdown pass from Jimmy Garoppolo in the back of the end zone in his first game as a professional.

Since that moment, Pettis has dealt with injuries and inconsistent play. He hasn't lived up to the hype. After putting together a few solid games to end the season last year, Pettis was pegged as the favorite to be Garoppolo’s No. 1 receiver in his sophomore season.

Pettis’ name was attached to the “breakout candidate” label throughout the offseason. A dynamic and versatile route runner in Kyle Shanahan's offense with a healthy Garoppolo? It sounds like a match made in heaven — not quite.

Pettis had an up-and-down offseason where he fell back from presumptive top wideout to deep down the 49ers' depth chart. Pettis was challenged by Shanahan throughout training camp. After Pettis played late into the third preseason game Shanahan said Pettis was “still trying to earn a role on this team.”

Shanahan later said his comments about Pettis weren’t meant to be derogatory.

“I have been hard on Dante,” Shanahan said. “But if anyone knows me, I am the hardest on people that I believe in. And I do believe in him a lot. And I’m always going to be probably a little disappointed because I think he can be very good. And it’s important to our team that he is.”

Even after Shanahan tried to clear up the confusion around Pettis’ role, his actions murkier after Pettis only played two snaps in a week one win at Tampa Bay. It seems like Pettis is beginning to fade away from Shanahan’s graces the longer he’s in Santa Clara.

Pettis' lack of play becomes more of a headscratcher when you remember the 49ers played without Trent Taylor and Jalen Hurd against Tampa Bay.

On top of all this Pettis has disappeared as the 49ers punt-returner. Pettis broke the NCAA record for most punt return touchdowns at Washington but hasn’t returned a punt past 15 yards in the NFL — yikes.

Has Pettis play faded because of him, his coach or a bit of both? We praise Shanahan’s ability to draw players open, but why hasn’t he been able to generate production for a receiver he traded up to pick only one season ago?

Pettis has a unique repertoire of skills that you want in a young wideout. Speed, creativity and the ability to create separation with his route running, but he hasn’t put it all together. Question marks are beginning to build about the second-year receiver.

Solving Pettis’ problem isn’t an easy one, but let’s start with more reps.

Shanahan said he wouldn’t let Pettis’ limited playing time happen again and that, is at least a step in the right direction. With more opportunities, the pressure shifts back to Pettis to perform. Pettis was a top-50 pick that needs command the football when he’s on the field to live up to his expectations. Shanahan needs to get Pettis going early if he truly does believe in him.

Pettis has all the skill and now he needs to start bringing confidence into each rep. The inconsistencies have taken over Pettis’ game. He needs to stack easy catches together to build a rhythm in the 49ers offense.

The 49ers desperately need a target outside of Geroge Kittle and Pettis should be the guy alongside rookie Deebo Samuel. With Pierre Garçon gone and Kittle being bracketed, Garoppolo needs Pettis to step up.

Both D.K. Metcalf and Tyler Lockett caught passes for over 40 yards against the Bengals secondary. There will be opportunities for Pettis in Cincinnati he just needs to seize them.