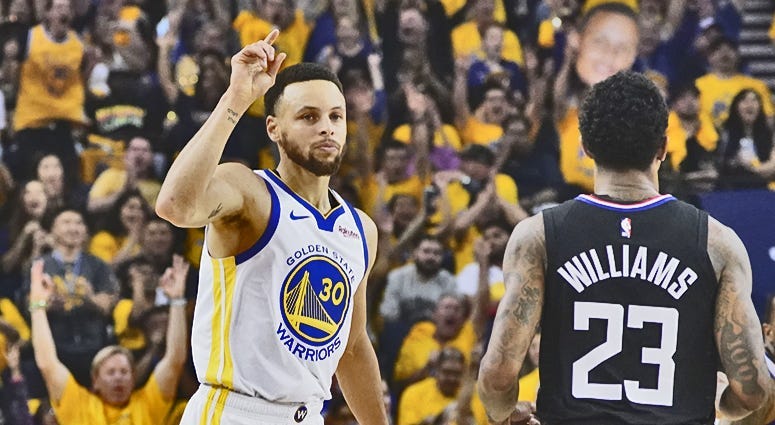 Steph Curry went off, Kevin Durant was ejected, and DeMarcus Cousins fouled out of his first career playoff game. Just a typical night at the office for the Golden State Warriors as they defeat the Los Angeles Clippers 121-104.

In the first game of the 2019 playoffs, Stephen Curry had a monster night scoring 38 points, draining eight of his 11 three-pointers, picking up a career-high 15 rebounds, and dishing seven assists. With eight three pointers Saturday night, Curry became the all-time leader in career playoff three-pointers.

Steph acting like he’s on a schoolyard playing a game of 21 pic.twitter.com/aSpWr3OxFF

Kevin Durant played well, scoring a quiet 23 points on 8-of-16 shooting before being ejected alongside agitating Clippers PG Patrick Beverley in the 4th quarter.

Kevin Durant and Patrick Beverley both ejected in the #NBAPlayoffs pic.twitter.com/heyJzVxUHI

In his first playoff game of his career, DeMarcus Cousins put up 9 points, 9 rebounds, and 4 assists in 21 minutes before fouling out.

Game 2 of this first round matchup between the Warriors and Clippers will be this Monday at 7:30pm on 95.7 The Game. Make sure to catch “Warriors Live” pregame beginning at 6:00pm.