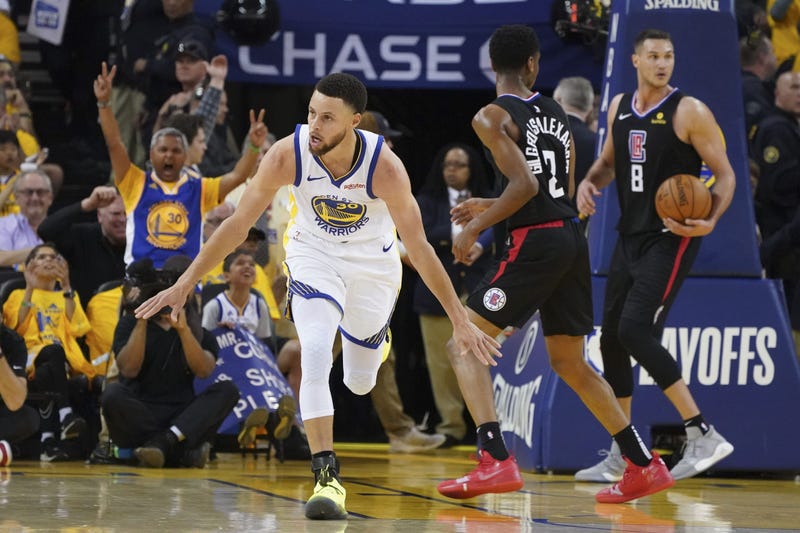 Game 1 in the first round of the NBA playoffs between the Warriors and the Clippers had a little bit of everything: trash-talk, technicals, ejections and plenty of turnovers.

There was a combined 38 turnovers (21 committed by the Warriors). And then there was the chippiness instigated by Clippers’ guard Patrick Beverley. Despite all of the shenanigans, that were expected, one thing was crystal clear Saturday night at Oracle Arena: Stephen Curry is still one of the best basketball players roaming planet earth.

As the Warriors took a 1-0 lead in their best-of-seven series with a 121-104 win, Curry let the game come to him, and damn near messed around and got a triple-double.

Curry finished with 38 points, a playoff career-high 15 rebounds, and seven assists. He also passed Ray Allen for the most three-point field goals (386) in NBA playoff history. Curry now stands alone with a record he’ll have for a long time.

When pressed on if this is the best version of Curry he’s seen, head coach Steve Kerr, probably out superlatives at this point, had this to say:

Is this the best Steph has ever been? pic.twitter.com/YLCnJLYzqm

After Lou Williams and Montrezl Harrell stabilized the game for the Clippers early in the second quarter, spearheading a 15-2 run to take a 42-40 lead, Kerr knew it was time to get the two-time MVP back into the game.

Curry, coming off of a Magic Johnson-like first quarter (six points, six assists, and four rebounds), took over the game in the second quarter with 14 points. He also shifted control back over to the Warriors, and turned Oracle Arena into a Travis Scott concert. Things get wild after a Curry flurry.

Kevin Durant, who had a “quiet” 23 points, four rebounds, and three assists, said afterward that he expects dominant performances from Curry.

Kevin Durant on Stephen Curry’s monster game:“I expect it at this point... I expect him to come out here with an MVP like focus because he’s an MVP.” pic.twitter.com/JqerXn4k95

What was more impressive? The 3-pointers? The Rebounds? His individual defense that continues to be underrated? Let’s hear from the wizard himself, who discussed his big rebounding night and gave love to his now famous contact lenses.

Stephen Curry shouts out his contact lenses & breaks down his 15 rebound effort in #Warriors victory. pic.twitter.com/dDtjCn8IXJ

I can write all night about Curry’s dominance, and explain how he’s the most underrated player in the NBA, but when we talk about the ‘best player in the world,’ why is Curry never mentioned? Seriously, he’s arguably the most impactful player since Michael Jordan, especially when you see how the game is played at every level.

I don’t know if he’ll ever get that distinction, but Clippers’ head coach Doc Rivers had the quote of the night when discussing the greatness of Stephen Curry. Good night, everybody.

“I still think Steph Curry is one of the most underrated players in the NBA."- Clippers coach Doc Rivers has high praise for @StephenCurry30 #NBAPlayoffs pic.twitter.com/vSdQFClecO