Thanksgiving may be a bit different across the country this year, but one thing that will be the same is that NFL football games will be played.

For the 14th straight season, there are three games slated for the holiday, which falls on Thursday, Nov. 22, or Week 12 on the NFL schedule.

Of course, everything is fluid in the coronavirus world. The NFL has been able to mostly weather the storm on that end, though, so hopefully a full day’s slate of football on Thanksgiving is something COVID will not be able to take away from us.

The Detroit Lions and Dallas Cowboys continue their tradition of playing on Thanksgiving, which dates back to 1978, while the evening matchup will be a showdown between two AFC North rivals.

Here is everything you need to know about when and where the games will be played and how you can listen on RADIO.COM.

• The Detroit Lions have played in 80 Thanksgiving games in franchise history. They are 37-41-2 in those matchups.

• This is the second time the Lions and Texans will play each other on Thanksgiving. The Texans won the last matchup in a 34-31 overtime thriller. Arian Foster rushed for 102 yards and two TDs for Houston, while Matthew Stafford threw an astounding 61 passes, completing 31 of them for 441 yards and two touchdowns in a losing effort.

• Matthew Stafford, who missed last year’s Thanksgiving game with an injury, is the all-time Thanksgiving passing leader with 2,705 yards. He passed Tony Romo for the mark in 2017. 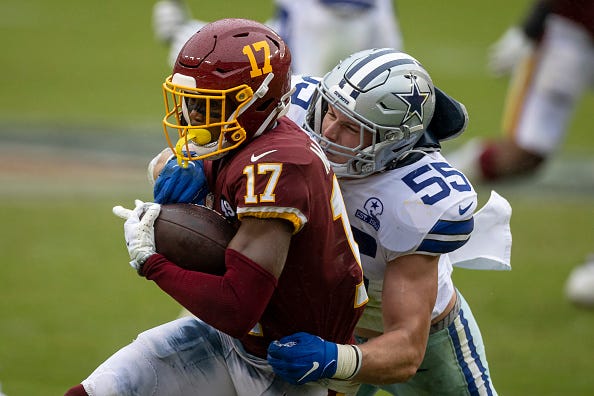 • This marks the 10th time the Cowboys and Washington will face each other on Thanksgiving Day. Dallas is 8-1 all-time in those games.

• Washington’s lone win came on Nov. 22, 2012 when Robert Griffin III threw for 304 yards and four touchdown passes. Washington led 28-3 at halftime and was able to hold off a second half comeback from Tony Romo and the Cowboys for a 38-31 win.

• Washington beat Dallas, 25-3, in Week 7. There was some controversy in that game when Jon Bostic knocked Cowboys QB Andy Dalton out of the game with an illegal hit. Washington head coach Ron Rivera apologized to Cowboys coach Mike McCarthy after the game. McCarthy was not pleased with how his team lack much of a reaction after the dirty hit.

• This is the third time the Ravens will play on Thanksgiving in franchise history and ninth time for the Steelers. The two previously played against each other on Turkey Day in 2013 when the Ravens won 22-20.

• The Steelers defeated the Ravens earlier this year in a nail-biting 28-24 Week 8 victory which kept Pittsburgh undefeated and atop the AFC North.

• The Steelers were involved in one of the most infamous Thanksgiving moments in 1998, when Jerome Bettis botched the coin toss in overtime – trying to call heads and tails at the same time – which allowed the Lions to get the ball first. Detroit won the game minutes later with a field goal.