It appears to be a matter of when, not if, four-time All-Star Francisco Lindor gets traded this offseason. Additionally, Trevor Bauer, J.T. Realmuto, George Springer and Marcell Ozuna are all free agents, and there's a very real chance all four could change teams this winter.

Those are some of the more likely movers this offseason. But what about players who are maybe less certain to move, but could benefit from a change of scenery?

Below are five players who we would like to see moved this offseason, and landing spots that would benefit from their respective additions. Are these the most likely trades? Perhaps not, but we tried to base them in reality to the point where they aren't impossible either: 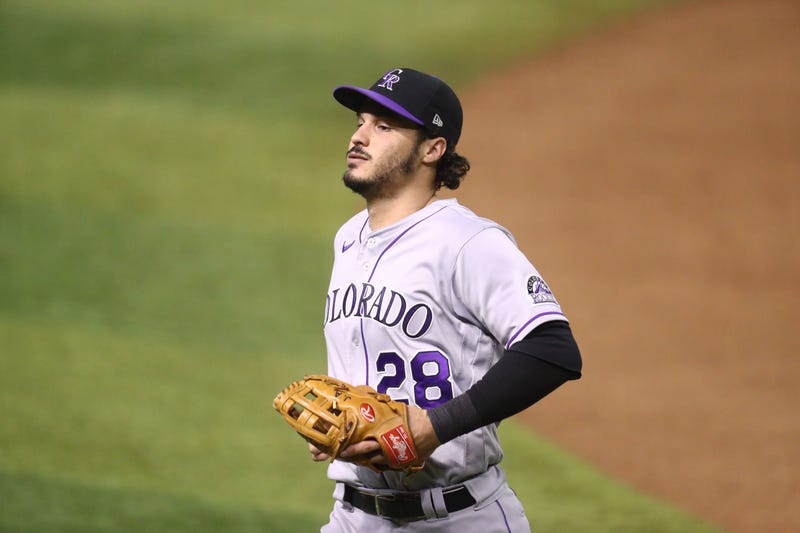 Francisco Lindor is the most accomplished veteran star whose name is being bandied about in early offseason trade speculation, but on the latest edition of "Big Time Baseball," RADIO.COM MLB Insider Jon Heyman suggested that the Colorado Rockies may be as motivated to trade Arenado as the Cleveland Indians are with Lindor.

Arenado is entering just the third season of an eight-year/$260 million extension, but the eight-time Gold Glove Award winner can opt out after the 2021 season, and given the lack of team success that the Rockies have had in recent years, the expectation is he'll do so.

The thing that makes Arenado so appealing to potential suitors is that if he's dealt to a contending team, there's a very real chance he won't opt out of the remaining five years and $164 million left on his deal. We don't know how COVID-19 will continue to affect the sport, and there is labor uncertainty in baseball with the current collective bargaining agreement set to expire after the 2021 season. It's not as though veteran players - especially ones already owed quite a bit of money - are dying to reach the free agent market.

Arenado is coming off of a down offensive season, although it's hard to draw too many sweeping conclusions for a 60-game season. The bigger concern is that Arenado is a .322/.376/.609 career hitter at Coors Field, but a .263/.322/.471 hitter away from the hitter's paradise. His elite defense will travel wherever he goes, and he's still an effective offensive piece, but there would be a reality in acquiring Arenado that he may never hit at the level he has with the Rockies.

Still, between Amed Rosario and Andres Gimenez, the Mets have two exciting young shortstops. Seemingly, third base is a bigger need for the team than shortstop. One of the two shortstops could be part of a trade package, as could multiple top-10 prospects. Landing Arenado, though, would qualify as a major splash as Steve Cohen takes over ownership in Queens. 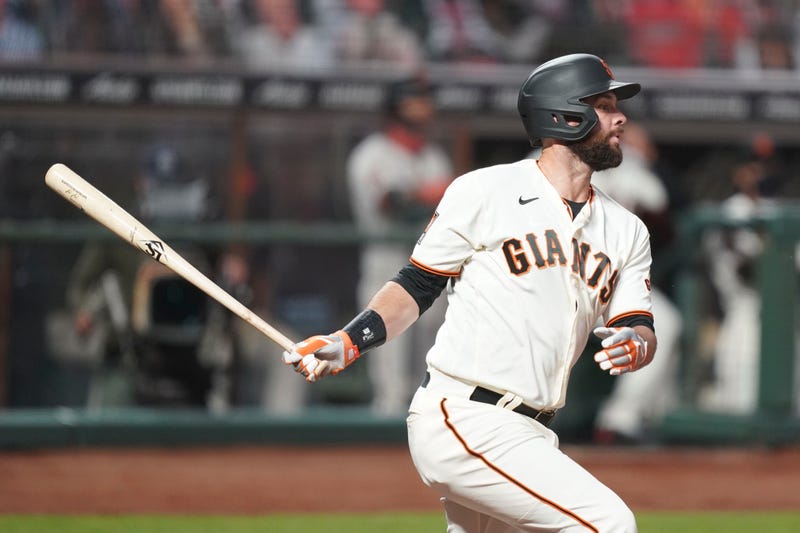 Belt has spent his entire 10-year career with the Giants, although if the DH doesn't return to the National League in 2021, his time with the franchise could be coming to its conclusion.

Joey Bart, the organization's top prospect, played in 33 games in 2020. The former No. 2 overall pick is probably ready to take over as the full-time catcher in 2021. That leaves the organization searching for somewhere to play franchise icon Buster Posey, who opted out of the 2020 season because of COVID-19.

Posey is entering the final season of an eight-year/$159 million deal. While he may catch some in his age-34 season, chances are that the former National League MVP will spend the bulk of 2021 playing first base. That, if the DH doesn't return to the National League, makes Belt expendable.

Belt should have a good market, if he's made available via trade. He's been an excellent defender at first base in his career, and is capable of playing some left field. The 32-year-old is also still a very valuable offensive piece, as he slashed .309/.425/.591 in 2020.

If the Blue Jays believe that a slimmed-down Vladimir Guerrero Jr. will play third base on a consistent basis in 2021, it would open up first base for Belt, and leave the DH for Rowdy Telez. Would such an addition make the Blue Jays the favorites in the American League East? No, but it would certainly improve their chances to win a Wild Card spot, especially if they also add a veteran center fielder in free agency.

Belt would be a short-term commitment, as he's owed an affordable $16 million in the final season of a five-year contract. 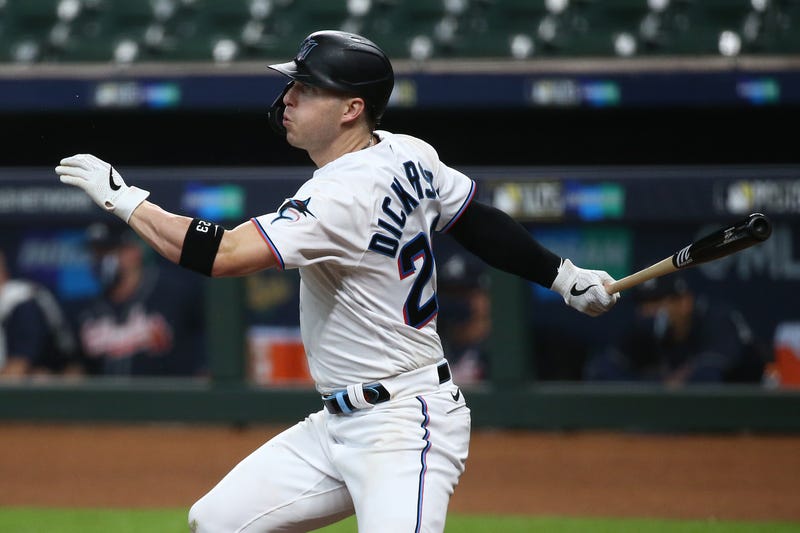 Could Corey Dickerson find himself on the move again this offseason? Photo credit (Troy Taormina/USA Today)

The low-budget Marlins traded for Starling Marte during the 2020 season, and have since exercised his $12.5 million option for 2021. They could flip Marte to another team, but the guess here is that he'll be the team's opening day center fielder in 2021.

If Marte remains, that may make it more likely that the typically frugal franchise looks to find a taker for Dickerson's $9.5 million salary for 2021. After the Marlins made a rare free-agent investment in Dickerson, he posted just a 0.3 offensive WAR in 2020.

That said, Dickerson earned his free-agent deal after he homered eight times and drove in 34 runs in 133 at-bats for the Philadelphia Phillies, who acquired him at the 2019 trade deadline. The manager of those Phillies was Gabe Kapler, now the skipper of the San Francisco Giants.

At 29-31, the Giants managed to remain in playoff contention into the final days of the 2020 season, a pretty surprising development. Still, president of baseball operations Farhan Zaidi has his work cut out trying to keep pace in a crowded National League West. Acquiring Dickerson isn't going to level the playing field with the Los Angeles Dodgers or San Diego Padres, but it could help the Giants to compete for one of the final postseason spots in the National League, depending upon how many teams will qualify for the playoffs in 2021.

Mike Yastrzemski is one of the best players on the team, and adding Dickerson to play left field would give the Giants another potential top contributor in their outfield, assuming the former All-Star bounces back in 2021. Dickerson could replace the left-handed production lost by potentially dealing Belt, if that happens. 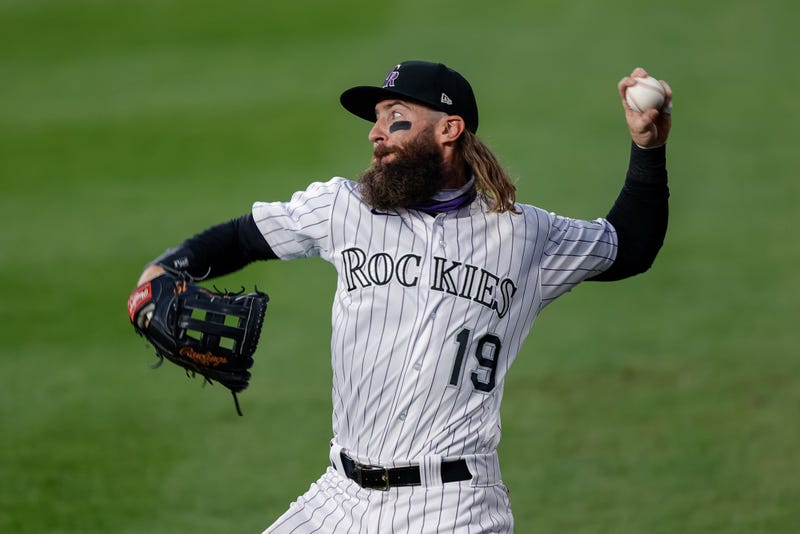 The White Sox figure to be a suitor for George Springer, the top outfielder on the market. If they miss out on him, the list of outfielders capable of playing right or center field at a proficient level thins out. Potentially the team could consider Joc Pederson or Jackie Bradley Jr., but multiple teams figure to show interest in the two former World Series Champions as well.

There's still a chance that a notable player gets non-tendered, but it's possible that the White Sox won't find another starting outfielder - probably a right fielder - on the free-agent market. That's where Charlie Blackmon could be an interesting candidate.

Though Blackmon tailed off after a scorching-hot start, he still hit over .300 in 2020 for the fourth time in the last five years. Blackmon perhaps isn't the same player that he was at his peak in Colorado, but he's a year removed from homering 32 times and driving in 86 runs. In a lineup that includes Jose Abreu, Tim Anderson, Yasmani Grandal, Luis Robert and Eloy Jimenez, Blackmon wouldn't be asked to be the offensive superstar he was at his peak, just an above-average contributor.

Maybe that means that Blackmon, 34, will finish his career in Colorado. But if the team trades Nolan Arenado this winter and potentially loses Trevor Story in free agency after the season, it would mean the Rockies are entering a full-blown rebuild. If that's the case, they may be interested in minimizing how much they owe to Blackmon moving forward, even if that means paying a part of his salary as he plays for another team. 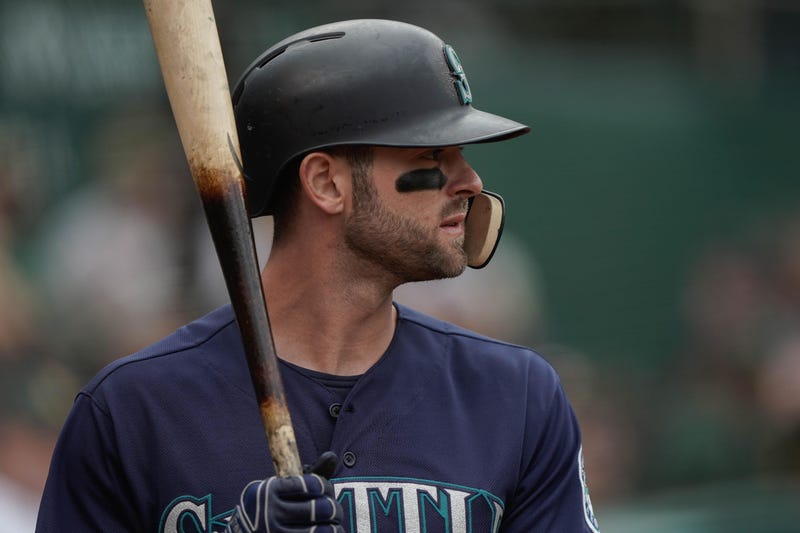 Mitch Haniger to the Detroit Tigers

Haniger ruptured his testicle during a 2019 game, and as Lauren Smith of The Tacoma News Tribune notes, he never appeared in a game during the 2020 season after dealing with back injuries and multiple setbacks.

Between 2017 and 2018, though, Haniger graded out as the seventh-best offensive right fielder in baseball, slashing .284/.361/.492 with 42 home runs and 140 RBIs, all while playing his home games at the hitter-unfriendly T-Mobile Park.

If healthy, Haniger could be an intriguing trade piece for a team on the come up, like the Detroit Tigers. Haniger could slot into right field for a team with a ton of young talent that's thin on experience, while leaving at-bats in center and left field for Daz Cameron and Victor Reyes.

The Mariners have drastically cut costs in recent years, so it likely wouldn't take a ton to get them to part with Haniger as he enters his second year of arbitration. From the Tigers' perspective, they could land a piece that helps them inch closer to contention in 2021 and 2022. If he rebounds and the Tigers prove not quite ready to contend - probably the most likely scenario - general manager Al Avila could flip Haniger either at the trade deadline or next offseason. Should the Tigers trade for Haniger and the soon-to-be 30 year-old doesn't rebound, the team could non-tender him next offseason, without having lost a ton.

Of the deals on this list, the Tigers would be taking on the lowest amount of risk in such a trade. It's the exact type of deal they should be making as their rebuild evolves.