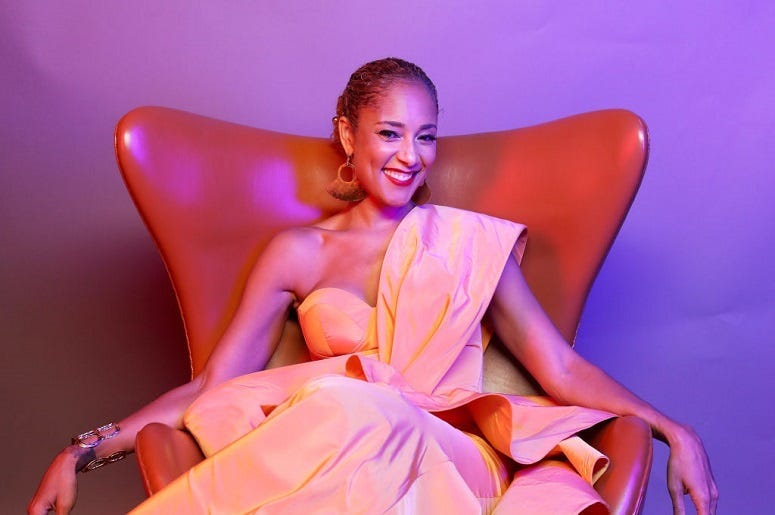 If you were like me as a kid...one day out of the year...in the month of June (once in July), you started your day going to church and ended it staying up until midnight watching the BET Awards. With iconic moments like Michael Jackson surprising James Brown when he received the Lifetime Achievement Award in 2003, when Mo'Nique gave us the ULTIMATE Beyoncé tribute when she hosted in 2004, when Beyoncé gave Terrance Howard a VERY personal dance during Destiny Child's performance in 2005, with icons like Prince, Rick James and the Fugees gracing the stage, the BET Awards have always been the ultimate showcase of Black talent throughout the years.

After 20 beautiful years of the celebration of black excellence, the 2020 BET Awards went virtual. With my favorite comedian, Amanda Seales as the host, she served us LEWKS, blasts-from-the-pasts with sets and scenes from famed BET shows like 106 & Park, Comic View, Video Soul and many more. She never failed to keep the show moving and viewers at home entertained with just her, some cameras, mics, and a green screen in her house (which is not an easy task without a live audience).

Now let's get into what you all really came for, HOW WERE THE PERFORMANCES?

We opened up with Keedron Bryant, the teenage gospel singer who went viral with his hit "I Just Wanna Live." We then flash to Chuck D and Flavor Flav of Public Enemy giving us an updated version of arguably one of the hardest rap song of the 80's, "Fight the Power" featuring Nas, Rapsody, and more artists taking part. With his debut BET Awards performance, Roddy Ricch gave us a powerful opening number with his live rendition of "The Box" while wearing his "Black Lives Matter" t-shirt. Meg Thee Stallion gave us hot girl energy in her desert-set performance of "Girls In the Hood" and "Savage." Dababy replicated George Floyd's final moments with his hit "Rockstar." John Legend and Alicia Keys sang from the heart and soul, each playing the piano during their separate performances. Masego gave us vibes with "Queen Tings" and Wayne Brady surprised us with his tribute performance to Rick James. Lil Wayne gave us a touching tribute to Kobe Bryant and his legacy with his 2009 track "Kobe Bryant." Summer Walker and Usher serenaded us with their duet of "Come Thru" and Kierra Sheard and Karen Clark Sheard shook our souls and bodies with their powerful gospel duet of "Something has to Break."

And we can't forget the "black girl magic" moment when Michelle Obama honored Beyoncé with the Humanitarian Award. Queen Bee gracing us with her flawless skin and lasting final words, "We have to vote like our lives depend on it."

Not only did the BET Awards pay tribute to the black talent we have lost throughout the year, including Andre Harrell, Kobe Bryant, Little Richard, Betty Wright and more gone too soon, they also paid tribute to the COUNTLESS black lives lost to police brutality, Sandra Bland, Breonna Taylor, George Floyd and the many names and faces of the lives taken away ​unjustly. Capturing the essence of what BET means to us, not only are we proud of the content and entertainment black people have brought to the world for years, but most importantly, the fight for justice and freedom and what that means for our people.

The 2020 BET Awards show once again reminded us that no matter what trials or tribulations we as a people have faced, we will always overcome and we always DELIVER.

Our culture can't be cancelled.

Sportsman of the Year- LeBron James

Sportswoman of the Year- Simone Biles