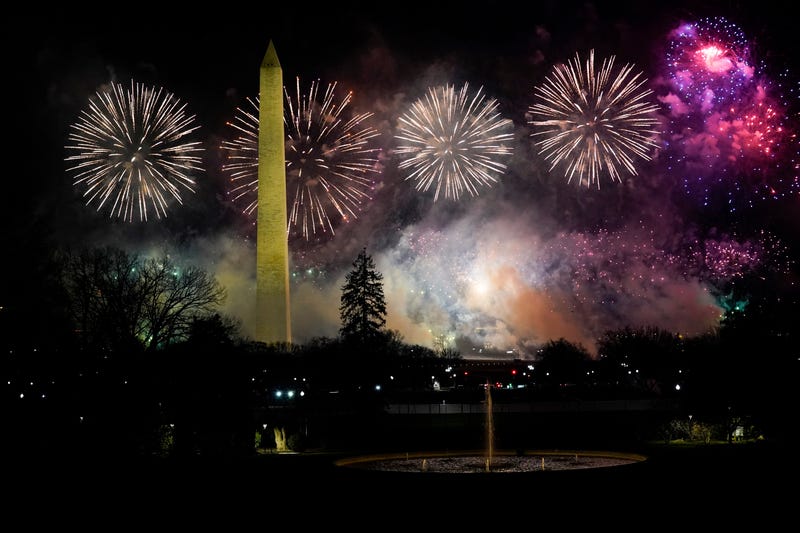 Fireworks lit up the sky behind the Washington Monument to mark the end of Inauguration Day for President Joe Biden.

Biden and first lady Jill Biden watched the end of the day’s events from a balcony in the White House on Wednesday night. The Bidens' grandchildren danced and clapped on the balcony.

While the coronavirus pandemic and security concerns in Washington vastly scaled back inaugural events, organizers created a celebratory atmosphere with live and recorded celebrity performances, ending with singer Katy Perry.

Vice President Kamala Harris and her husband, Doug Emhoff, watched the fireworks from the steps of the Washington Monument after Harris delivered brief remarks.

HERE’S WHAT YOU NEED TO KNOW ABOUT JOE BIDEN’S INAUGURATION AS THE 46TH U.S. PRESIDENT:

Joe Biden took the oath of office at noon Wednesday to become the 46th president of the United States. He takes charge in a deeply divided nation, inheriting a confluence of crises arguably greater than any faced by his predecessors.

— Biden takes the helm as president: ‘Democracy has prevailed’

— Vice President Harris: A new chapter opens in US politics

— Analysis: For Biden, chance to turn crisis into opportunity

HERE'S WHAT ELSE IS GOING ON:

Obama said, “Inaugurations celebrate a tradition of a peaceful transfer of power that is over two centuries old.” But the mere fact that all three felt compelled to come together to address the issue speaks to the fraught moment the country faces.

President Donald Trump repeatedly and falsely insisted for months that the November election was stolen from him, and he whipped up a violent crowd of supporters who stormed the U.S. Capitol two weeks ago seeking to overturn the certification of Biden win. He also snubbed his successor's inauguration.

In the video, Clinton urged Americans to get off their “high horses” and reach out to friends and neighbors with whom they may have differences. Bush said he wanted Biden to be successful because his “success is our country’s success.”

Kamala Harris talked about the power of “American aspiration” in her first speech to the nation as vice president.

With the Washington Monument lit up behind her Wednesday night, Harris called on Americans to remember “we are undaunted in our belief that we shall overcome, that we will rise up.”

She also cast her ascension as the first female vice president as a demonstration of the nation’s character.

Borrowing a line she frequently used on the campaign trail, she said, “We not only see what has been — we see what can be.”

Harris gave a nod to American scientists, parents and teachers who are persevering through the coronavirus pandemic and encouraged people to “see beyond crises.” She spoke during President Joe Biden’s “Celebrating America” event to mark the inauguration.

Bruce Springsteen sang “Land of Hope and Dreams” as he stood alone with his guitar in front of the Lincoln Memorial to open “Celebrating America,” a broadcast special to honor the inauguration of President Joe Biden.

Performing the 1999 song of solace, Springsteen sang, “I will provide for you, and I’ll stand by your side. You’ll need a good companion, for this part of the ride.”

Host Tom Hanks, also at the Lincoln Memorial, introduced the show by saying, “In the last few weeks, in the last few years, we’ve witnessed deep divisions and a troubling rancor in our land. But tonight we ponder the United States of America.”

Kerry Washington and Eva Longoria are co-hosting the show, which will also include performances from John Legend, Katy Perry, Demi Lovato, the Foo Fighters, Justin Timberlake and Jon Bon Jovi.

Harris won’t immediately move into the vice president’s residence at the Naval Observatory in Washington, D.C. A Harris aide says the delay will allow time for repairs to the home. The house needs its chimney liners replaced, among other fixes, and it’s easier to finish the work with the home unoccupied.

The former California senator has a home in downtown D.C. where she typically stayed while in town for work, but it’s unclear if she’ll remain there while waiting for the repairs to be completed.

Every vice president since Walter Mondale has lived at the Naval Observatory, and it’s been the site of visits from foreign dignitaries, events and gatherings hosted by vice presidents past.

A group of protesters carrying anti-President Joe Biden and anti-police signs is marching in Portland and damaged the headquarters of the Democratic Party of Oregon.

Police say the group smashed windows and spray-painted anarchist symbols at the political party building on Wednesday. It was one of at least four groups planning to gather in the city on Inauguration Day.

Police say officers on bicycles entered the crowd to contact someone with a weapon and to remove poles affixed to a banner that they thought could be used as a weapon. Police say the crowd swarmed the officers and threw objects at them.

Portland has been the site of frequent protests since the police killing of George Floyd in Minneapolis in May. Over the summer, there were demonstrations for more than 100 straight days.

Mayor Ted Wheeler recently decried what he described as a segment of violent agitators who detract from the message of police accountability and who should be subject to more severe punishment.

Psaki said Wednesday in the first press briefing of the Biden administration that the president believes members of the Senate should figure out how to proceed with a trial that could consume the opening weeks of his presidency.

Psaki says the administration is instead focused on the pandemic and the economic crisis that have engulfed the country for nearly a year, noting that the Senate can handle multiple issues at once.

Trump was impeached last week on a charge of inciting an insurrection. It was his second impeachment, a record for any president.

Psaki said Wednesday at her first press briefing that the subject of the call will be relations between the United States and Canada as well as the status of the Keystone XL oil pipeline, whose permitting Biden revoked in one of his first acts as president.

Psaki says Biden’s first round of calls to foreign leaders will be with allies, adding that the new president plans to repair relationships damaged by former President Donald Trump’s adversarial approach.

White House press secretary Jen Psaki is delivering the first news briefing of Joe Biden’s presidency, a once standard part of past administrations that was largely sidelined during the Trump era.

Psaki said Wednesday that she will bring truth and transparency to the White House briefing room, a clear reference to her predecessors under President Donald Trump.

The Trump administration took an openly combative tone with the news