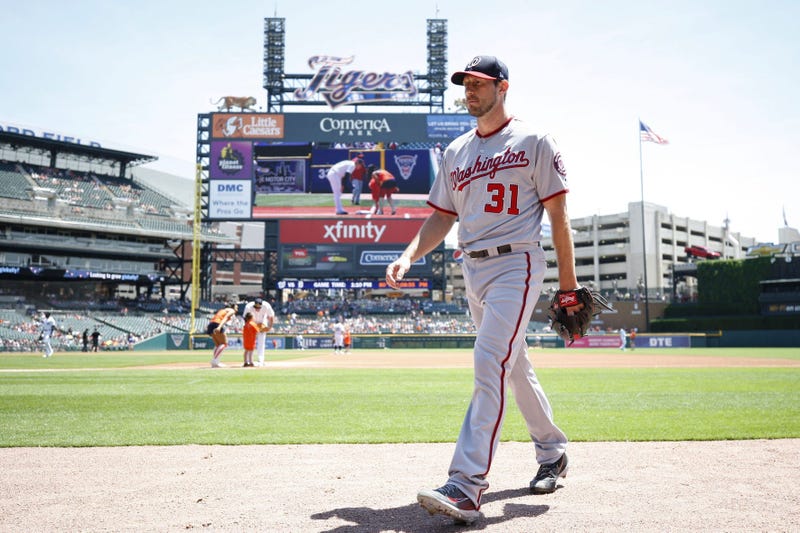 A day after Justin Verlander accused MLB of juicing its baseballs to create more offense -- "It's a fu**ing joke," he said -- his former Tigers teammate Max Scherzer took a notably different stance.

"I don't feel anything different with the ball, but we can all see the ball is definitely traveling differently," Scherzer told ESPN. "The commissioner has even come out and said so, that the drag is just different, it's less. Yeah, the ball's different, but you can't cry about it. You gotta go out there and pitch. I'm not gonna cry about it. Our hitters get to hit with it."

Max Scherzer says the balls are definitely traveling further, but he's not going to cry about them. https://t.co/hZaSXFQ5nr

Verlander, who has surrendered an major-league high 26 homers this season, slammed MLB in an interview Monday with ESPN. He suggested the league and Rawlings have worked together to doctor baseballs, attributing to the sharp increase in home runs over the past few seasons. MLB bought Rawlings, the supplier of the official major league ball, last June.

"It's a fu**ing joke," said Verlander. "Major League Baseball's turning this game into a joke. They own Rawlings, and you've got (commissioner Rob) Manfred up here saying it might be the way they center the pill. They own the fu**ing company. If any other $40 billion company bought out a $400 million company and the product changed dramatically, it's not a guess as to what happened. We all know what happened. Manfred the first time he came in, what'd he say? He said we want more offense. All of a sudden he comes in, the balls are juiced? It's not coincidence. We're not idiots."

Per ESPN, home runs this year are up almost 60 percent from the 2014 season. The current pace of 6,668 would crush the previous record of 6,105 set in 2017. Verlander, who has given up the most homers (111) in the majors since 2016, said he "100 percent" believes MLB is consciously juicing its balls, adding that it affects the way he pitches.

"I hate the way I feel out there," he said. "No matter who's the batter, I feel like I'm constantly walking a tightrope, because any batter can go opposite field. Any batter can leave with any pitch that's anywhere in the zone. You can't miss barrels anymore. You have to miss bats. There's been multiple times this year where five years ago I'd probably just throw a fastball away. I can't do that. Because you're the 8-, 9-hole hitter and you still can hit an opposite-field homer."

Manfred has shot down accusations of juiced baseballs in the past, and did so again Tuesday when asked about Verlander's comments.

"I'm not going to respond specifically," he told reporters. "I'm going to stand by what I said. What we need to be on the baseball issue is transparent and forward-looking. There has been no intentional alteration in the manufacturing process."

Despite his vulnerability to the long ball this season, Verlander, 36, is still on top of his game. He's 10-4 with a 2.98 ERA and an MLB-best 0.813 WHIP. He'll start for the American League All-Stars Tuesday night.