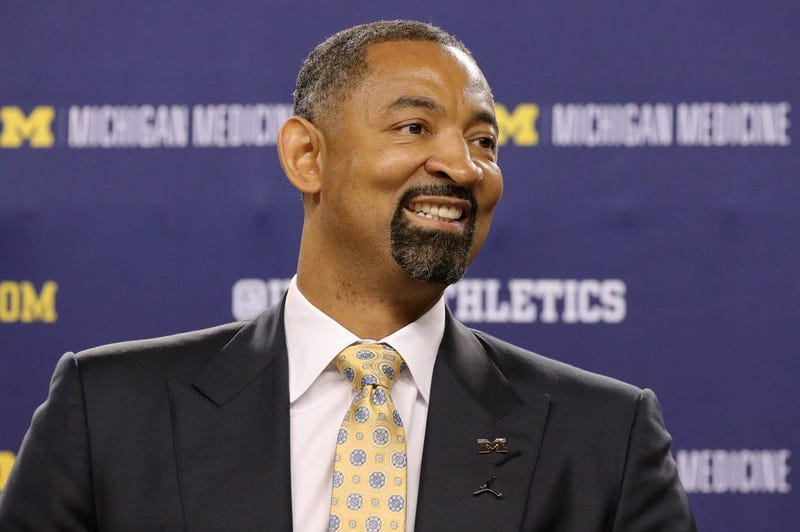 In a scene no one saw coming when the college basketball season came to an end, Juwan Howard was introduced on Thursday as Michigan's new head coach. Overwhelmed to be back in the building where he once played, Howard broke down upon stepping to the podium and being presented with his old jersey.

As we run down a list of takeaways, that's a good place to start.

If there were any questions as to why Howard left the NBA for a job in college, there aren't any now. This is clearly where he wants to be.

"I said I wasn’t going to cry, but I guess that never happens when you’re excited about something that’s so special to you, that means so much. Last time I had a press conference in this building was 1994. I declared that I was going to the NBA. Felt like I was letting down my teammates because I didn’t do what I came here to do, and that was to bring a championship to this university. A university that I care so much about. I guess you can see that now, huh? Now let’s fast-forward 25 years later -- I’m back."

After six seasons as an assistant coach with the Miami Heat, Howard had lots of interest this summer from other NBA teams. But when he found out John Beilein was moving on, he knew there was only one job he wanted. He recalled seeing the news of Beilein's departure on his phone early that morning and immediately feeling the pull of home.

"I was preparing that week to go and interview for the Minnesota Timberwolves head coaching position. I laid back on my pillow and said, 'Coach Beilein just left Michigan.' I've always been asked by friends and by family, would I ever coach college basketball? My answer has always been, 'There's only one job, only one school that I would pursue on the collegiate level. And that’s the University of Michigan.'

"It was unfair at the time that I'm preparing for the Timberwolves interview and in the back of my mind all I kept thinking was just, 'Michigan, Michigan, Michigan.' I'm not afraid to be honest. The GM and president of the Timberwolves, I knew he's out there listening. I have a ton of respect for him. He understood why I chose Michigan after they made me an offer. The Timberwolves offered me the associate head coaching position. I said, 'Out of respect to you, I appreciate it. But my heart is with Michigan and it will always be that way.'"

Following the departures of Charles Matthews, Ignas Brazdeikis and Jordan Poole to the NBA, Michigan has three open scholarships for next season. One incoming recruit, Jalen Wilson, de-committed after Beilein left. But Howard reveled on Thursday he was able to convince the other recruit -- a four-star forward named Cole Bajema -- to stay on board.

"I had to go back and start recruiting again, quickly. One guy, Cole Bajema, I got a chance to talk to, meet on the phone, communicated with his parents, got the chance to understand them as a family. I know they’re more concerned with Cole’s future. Cole was committed to the University of Michigan thinking that John Beilein was going to be his head coach. Now Cole has re-committed and will be signing his letter of intent soon to attend the University of Michigan."
4. Banners Back to the Rafters?

Howard, of course, was a member of the Fab Five teams that had their achievements vacated by the NCAA and their Final Four banners taken down by Michigan in the Crisler Center. Could those banners eventually go back up? Howard smiled.

"I knew that question was coming. I look up there, I see those beautiful banners and I’m like, 'Wow, Michigan has a rich tradition. Been a lot of great, special things in this building.' ‘92, ‘93, fun time. Jimmy (King) can attest to this. Worked extremely hard to make it all possible, sacrificed a lot, been through a ton of adversity, earned minute of it. That is something on the table that we, as a staff, myself, (athletic director) Warde (Manuel), will definitely revisit. When? I don’t know. Can’t make any promises. That’s all I can say at this moment."

5. Ready for the Doubters

Howard knows he'll be under intense scrutiny due to his lack of experience as a head coach. "I'm sure there are a lot of people out there that are doubting the fact that I’m a first-time head coach," he said. "Well, you gotta start somewhere, don't you?" Howard believes he's ready for the job, and explained why.

"I came from a culture, the Miami Heat culture, which is a championship-caliber culture. I learned from a guy by the name of Pat Reilly, Erik Spoelstra. Three championships, two championships that I was involved with, four straight (finals appearances). The last year I was an assistant coach, siting in that room, helping game plan, being like a sponge, learning, developing that growth mindset and preparing myself for a day like this. Now I get the keys."