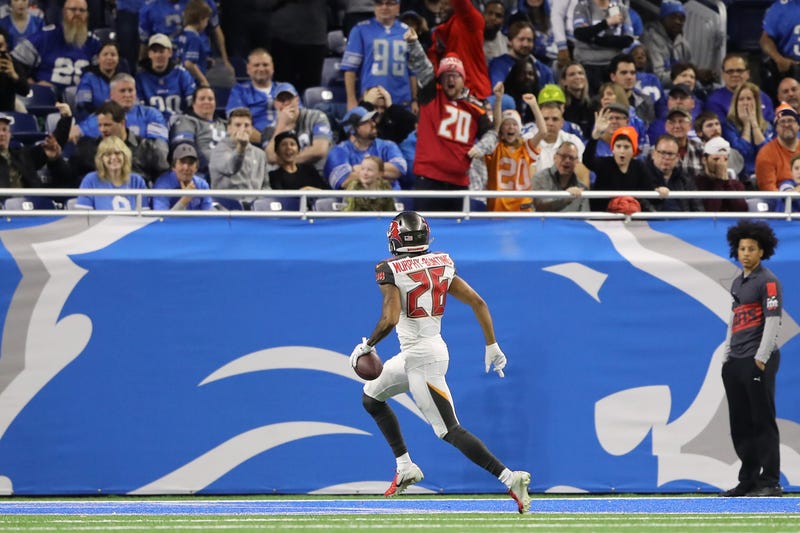 Spend a few minutes with Sean Murphy-Bunting, and you might think you're talking to Darius Slay.

Murphy-Bunting has the best hands in Tampa Bay's secondary, he'll tell you. Everyone else has "butterfingers." And he would have had the best moves in the end zone after his pick-six that sealed the Bucs' win over the Lions on Sunday, but then "this dude right here," safety Mike Edwards, getting dressed at the neighboring locker, "knocked me over twice," said Murphy-Bunting. "So he ruined my celebration."

You got nervous, a reporter told him.

Then he turned toward Edwards and the two of them hit something else, perfectly in sync, and it's too bad Slay couldn't hit it with them.

He was in the locker room next door, chewing on yet another loss, Detroit's seventh in a row. He might be approaching his final home game at Ford Field, depending how things shake out this offseason. Murphy-Bunting, who grew up in Macomb, used to watch Slay from these seats. He guesses he went to some 20 games as a kid, often with his dad. The Lions weren't really Murphy-Bunting's team, but Slay was his guy.

And now he held Slay's jersey in his hands, with a personal message inscribed on the back.

And between those two words, Slay wrote this: "Keep ballin!!!"

It left a cool cat shaking his head, momentarily hushed. Back in his Chippewa Valley High days, Murphy-Bunting used to hit up Slay on Twitter. Same when he was at Central Michigan. He was looking for workouts, for tips, for anything, really. Slay, being Slay, would hit him back. But they were never able to connect in person, until Sunday afternoon at the middle of Ford Field after Murphy-Bunting had returned home in style.

What did Slay tell him?

It's a prerequisite of playing his position, much less playing it in the NFL. Slay could attest. You're going to get beat. Sometimes, you're going to get beat a lot. Earlier this season, Slay was schooled up and down the field by Chargers receiver Keenan Allen. And then, you might remember, he flipped the tables when it mattered most. Sunday began in the same fashion for Murphy-Bunting, who kept getting beat on out routes by Danny Amendola. He admitted as much himself.

With the Lions driving to tie the game late in the fourth quarter, Murphy-Bunting saw another one coming. Not this time. He jumped in front of Amendola, picked off David Blough and took it 70 yards to the house, carrying the ball one-handed, he said, like Michael Vick or Lamar Jackson -- or Darius Slay -- and doing his best to take it all in. He said he couldn't really hear. All he could see was open field.

"I was gone," he said. "Was not going to be caught. I got burners. These are real-life wheels over here.”

It was Murphy-Bunting's third interception in the NFL, and his first pick-six. When he got to the end zone, he wasn't sure what dance to go with. Before he could decide, Edwards jumped on his back and knocked him over. Twice.

"Mr. Clumsy," said Murphy-Bunting. "He kept nagging at me like that annoying kid, like, ‘Hey, hey, hey, hey!’ He kind of messed it up. It was still fun, though.”

After Murphy-Bunting got up the second time, he swaggered up to a camera and reminded everyone on TV that his roots are right here.

His city, his game, his day. Somewhere, Slay is nodding in respect.