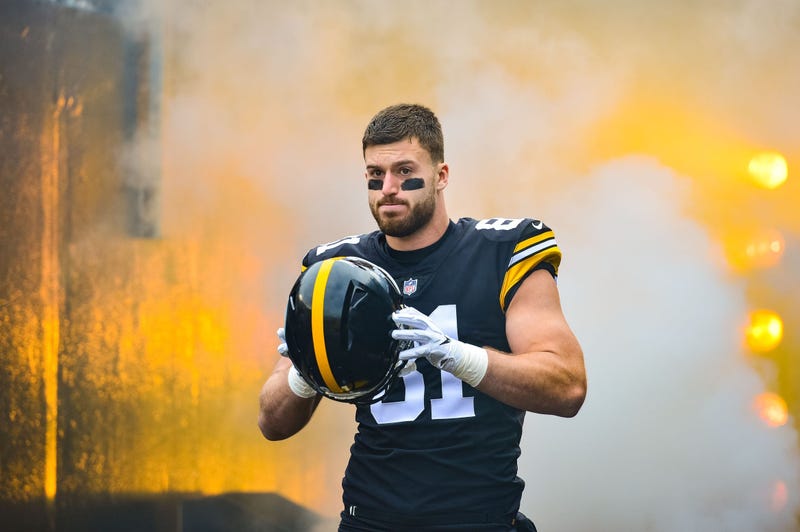 "I've had some success in Pittsburgh. I think it could have been better. Offensively, I wasn't used the way I feel I could be used here," James said. "I feel like my ceiling is much higher here than it was in the past. Coach (Darrell) Bevell does a great job using his personnel the best they can be."

After a career year in 2017, his third in the NFL, James saw his role reduced in 2018. He lost playing time to the more experienced Vance McDonald. He finished the season with 30 catches for 423 yards and two touchdowns in 16 games, numbers he expects to improve upon this year.

He wasted little time in free agency agreeing to a four-year, $22.6 million deal with the Lions.

"Coming in here I feel I'm going to be a key part of this offense. Pittsburgh, I was a key part, but I think my role here can be greater and I'll be able to do more things in games, on the ground and in the air," James said. "From what I was last year, I'm going to be a better player this year."

In Detroit, James is eager for more opportunities in key situations. Of his 39 targets last season, down significantly from each of the two years prior, two came in the red zone and two came on third down.

He immediately becomes the No. 1 tight end on the Lions, who hardly had such a thing last year.

"A lot of time with Vance in Pittsburgh, I was splitting time. I was more first and second down and he was coming in on third," said James. "I'm looking forward to having that shot on third downs, helping the offense succeed in those high-pressure moments, in the red zone and on third down.

"I just think I can do more. Like I said, I've gotten better every year, I'm still young -- 24 years old -- so my ceiling hasn't been reached yet. I still have a long way to go to get better, and I'll do that while I'm here."

Few teams, if any, got less production of out their tight ends last season than the Lions. The trio of Levine Toilolo, Luke Willson and Michael Roberts combined for just 43 catches for 450 yards and four touchdowns in 38 games. General manager Bob Quinn entered the offseason knowing he needed to bring in new talent.

Signing James was his first move. He's likely to make another in the draft, and there's still a chance he could strike early. T.J. Hockenson is the name drawing the most chatter, but keep an eye on the likes of Noah Fant, Irv Smith Jr. and Jace Sternberger as well.

However the Lions proceed, they've already secured one upgrade in James. Despite his down numbers last season, he posted a career-high 14.1 yards per reception, stretching the field and gaining yards after the catch.

He's also proven himself as one of the more sure-handed tight ends in the NFL. His catch rate of 71.6 percent over the last two seasons ranks 10th among all receivers. If all goes according to plan in 2019, he'll get plenty of chances to flash those hands in big spots.

Chalk it up to the optimism brought about by a fresh start, but James was already talking on Thursday about a Super Bowl. He believes the Lions have two of the key pieces in place.

"I think we've got a quarterback, a franchise quarterback in Stafford," he said. "He's fought through stuff, injuries, in the past that I have a ton of respect for. I've got a similar mindset going into things -- we're willing to put it all on the line to get a win for the team. I just see that time and time again from him.

"And Coach Patricia, he's won Super Bowls, he's been there, he's done that. He knows the path to put us on to get us ready for a January run. We need to get used to playing January football because finishing your season December 31 isn't really that fun. To me, it's kind of a waste of a year."

James would know. He went to the playoffs each of his first three seasons, reaching the AFC Championship in 2016. He missed out for the first time last season, and that bitter taste remains. He's here to wash it down.

His arrival, ironically, has a lot to do with a player who's no longer around: Anthony Zettel. The two were teammates at Penn State, and Zettel will be the best man at James' wedding in June.

Zettel was released by the Lions last September and latched on with the Browns, but he had nothing but good things to tell James about Detroit.

"He's a big reason, too," James said. "He's familiar with the area. He's from West Branch, two hours away, so he's always been a Detroit fan. He loves Detroit, loved the city. He sold me on the living part.

"He sold me on the fact that Detroit gets a bad rap, but it's a good, hard-working city and there are beautiful places to live."