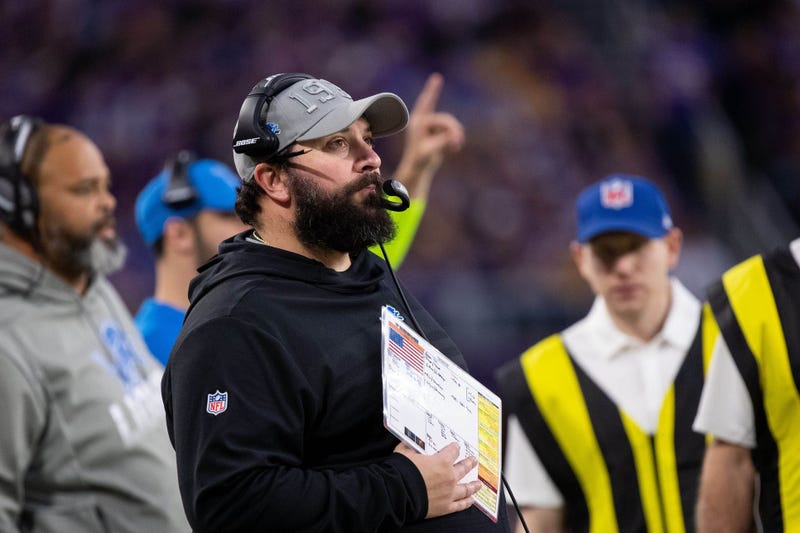 As the scrutiny increases on Matt Patricia, former Lions players continue to paint the picture of a leader losing control.

Last week it was Glover Quin, who questioned whether Patricia's players still want to fight for him.
And now it's Hakeem Valles, a tight end with the Lions from 2017-18, who told the Pride Podcast that Patricia has created a culture of fear in Detroit fueled by his outsized ego. Valles also railed against Martha Ford and called for a "whole regime change," starting with ownership, if the Lions want to turn things around.

Valles, who spent most of his time on the practice squad over parts of two seasons in Detroit, said he was praying another team signed him when the Lions put him on waivers early last season.

"I did not want to go back to Detroit. To be real with you -- I could give two sh*ts, especially because I’m not in the NFL anymore -- I did not like Patricia as a coach. I was praying another team picked me up and I didn’t have to back to the practice squad," he said.

Valles, who has since retired from the NFL, said his problem with Patricia stems from a lack of respect. According to Valles, Patricia didn't operate by the same standards that he set for his players.

"He’s creating a culture based on fear, in the sense of there’s too much ego involved," said Valles. "It’s a very alpha-beta type of room, meaning he’s the alpha, everybody else better be a beta.

"I don’t know however many meetings there were, in the time that (I) was there, there was not one meeting where he came on time. That's wild to me. So much disrespect in that, in my opinion, in the sense of, we come late to a meeting, we get fined. And it's almost like he did it on purpose to let you know that, 'You’re beta, I’m alpha, you’re going to come on time, I’m going to come whenever the f*ck I want.'"

Asked if Patricia carried himself like Bill Belichick, Valles said Patricia took it a step further.

In meetings the day after a game, Valles said Patricia ripped into every player on the team.

"That sh*t is the worst with him. After a game with him, you spend a solid hour and a half or so, maybe a little bit more, literally him breaking down every single damn play of the game. And he is up your ass, from Prater on a a field goal to Stafford on a pass to Slay on a route, anything. He’s just ripping everybody apart, for an hour and some change," said Valles.

Asked if the star players ever pushed back against Patricia, Valles said, "Not out loud. No one had the audacity to say anything out loud."

When the Lions traded co-captain Quandre Diggs this season, it was said he had become a voice of dissent inside the building.

"That’s just how it goes, man," said Valles. "It’s wild. If you have any type of (individuality) the way you’re doing it and you’re not conforming to everyone else and how everyone on the team wants you to be, they’re going to cut you or they’re going to trade you."

With the Lions headed for another last-place finish, Patricia's future has come into question. Detroit, which went 9-7 each of the two seasons prior to his arrival, is 9-19-1 in the two seasons since. General manager Bob Quinn, who plucked Patrica from New England to replace Jim Caldwell, is also facing heavy criticism.

Valles said the current regime would only work "if every single player got on board with the sh*t (Patricia) was pitching. But we’re all grown-ass men. It would work in college, definitely, but you can’t talk to a grown-ass man any way you want. If you talked to one of your employees (like that) at any work place across America, you'd either get punched in the face or someone would just quit on the spot."

But given the level of pay in the NFL, Valles said players don't want to step out of line.

"That’s why I walked away so I could get the leverage back in my hands, so if a coach does talk out of pocket, like Patricia would, I could literally say, 'F*ck you, I quit. Someone else will sign me, or if not, I’m straight with business.' But that’s where it's not football anymore," he said. "When you're going through life every day thinking like that, you’re not thinking about football. You’re thinking like, 'Damn, I gotta deal with this as*hole today.'"

"And I’m not saying that in the sense of like, 'F*ck Detroit, blah, blah, blah.' I have so much love for the team, the city, the fans. I feel bad for the fans in that sense. But it’s gotta be a whole regime change, like, Martha Ford has to sell the team. She’s still calling shots, that doesn’t make sense. I have zero respect for Martha Ford, mainly because I’ve met her 10 to 15 times and every single time I’ve met her, she’s reintroduced herself. 'Hey, Martha, how are you?' and she’s just, 'Hi, my name’s Martha.' Are you shi*ting me? I have zero respect for you at that point. And I felt that every single time, like, damn, I'm really a nobody."

It's unclear if Ford and the Lions will bring back Patricia (and/or Quinn) for next season. There's a growing sense that they will. Patricia has talked frequently in recent weeks about "the process" of building a winner. He believes the Lions are close.

"We’ll see what happens," said Valles. "I’m surprised he hasn’t been fired yet."