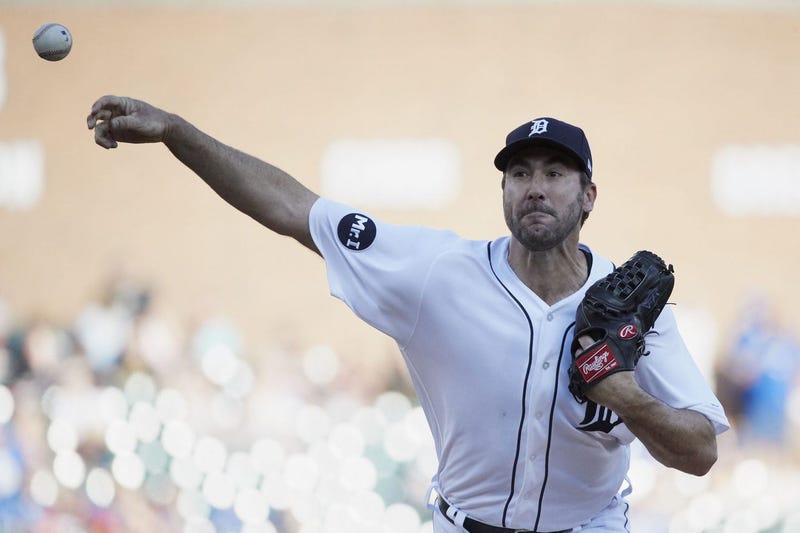 March 26, 2020 03/26/2020 3:47 am
97.1 The Ticket -- Thursday was supposed to be Opening Day for Major League Baseball.
What's normally a day of celebration in many cities across the country will feel strangely quiet, as baseball, like most sports around the globe, has come to a standstill amid the coronavirus pandemic.
MLB is doing what it can to fill that void, with "Opening Day at Home," as it re-airs 30 classic games -- one for each team -- across various platforms throughout the day.
Tigers fans can re-live the glory of Justin Verlander's first career no-hitter against the Brewers on June 12, 2007. The full game will be streamed on MLB.com and the MLB Facebook page, beginning at 9 a.m. ET.

On the heels of his 2006 rookie season, Verlander was on his way to stardom. This game was the one that solidified his candidacy for his first All-Star Game just weeks later.

Verlander's no-hit bid began to pick up steam when he got through the sixth inning on just 12 pitches. The crowd really began to stir throughout Comerica Park in the seventh inning, when right fielder Magglio Ordoñez made a sliding catch on a one-out Corey Hart line-drive that surely looked like it was about to break up the no-no.

JV settled in to face the minimum over his last 13 batters, delivering the Tigers' first no-hitter since Jack Morris in 1984. He racked up a then-career high 12 strikeouts and issued just 12 walks.

Verlander's third career no-hitter -- with the Astros against Blue Jays last September -- will stream at noon.

A couple other Tigers games will take the stage on "Opening Day at Home," though many Detroit fans likely won't want to watch. The Game 163 thriller at Minnesota from 2009 will be shown at 11:15 a.m. The Tigers lost 6-5 in 12 innings, with the Twins moving on to the AL Division Series. The other one? The Orioles' comeback in Game 2 of the 2014 ALDS that saw the Tigers give away a three-run lead in the eighth.

Other notable games on the docket include the 2016 World Series Game 7 classic between the Cubs and Indians, which saw Chicago end its 108-year title drought; Boston's 2004 ALCS Game 4 thriller that led to an epic series comeback; and Luis Gonzalez's legendary walk-off to give the Diamondbacks the 2001 World Series.

"Opening Day at Home" is not only a way for baseball fans to get there fix, but also "an opportunity for MLB to raise awareness for several worthy charities that are helping provide relief to the most vulnerable communities impacted by the pandemic." More details on the charities are available at MLB.com/give.
See the full "Opening Day at Home" lineup here.