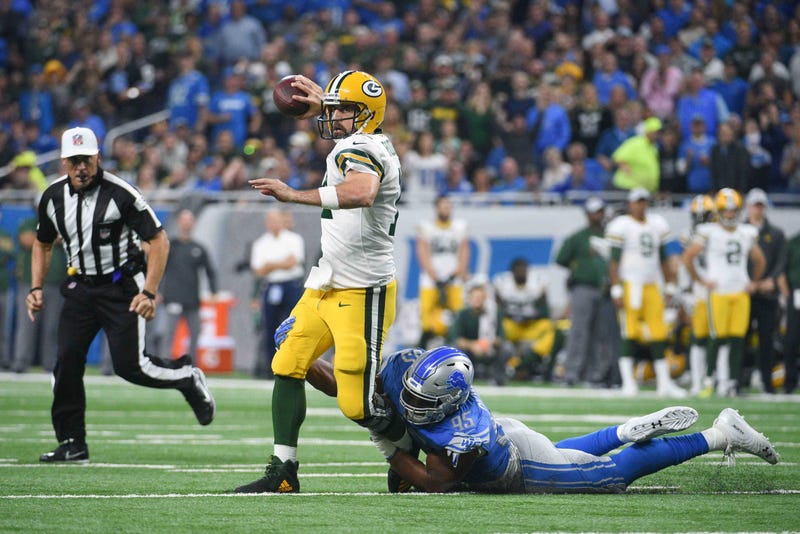 Believe it or not, the Lions have won four straight games against the Packers -- tied for their best streak against Green Bay in the Super Bowl era. They'll look to make it five next Monday night at Lambeau Field.

Standing in their way will be Aaron Rodgers, who's due for a win. His drought versus Detroit, which really only amounts to one game, doesn't necessarily encourage Matt Patricia.

Asked if last year's success against Rodgers can help his team, Patricia said Tuesday, "It probably makes me more nervous than anything, to be honest with you, just knowing what a competitor he is."

"From my standpoint, it’s all about trying to prepare and get ready this year and the things that they’re doing this year," Patricia went on. "Certainly they’re in a really good spot and they’re operating at a very high level. We have a big task in front of us.”

Of the Lions' last four wins against the Packers, Rodgers was only a factor in one. He missed both games in 2017 with a broken collarbone, and threw just five passes in last year's season finale before leaving with a concussion. In the teams' first matchup in 2018, a 31-23 victory for Detroit aided by four missed kicks by Mason Crosby, Rodgers threw for 442 yards, three touchdowns and no interceptions.

So if the Lions have turned the tables against the Packers, they haven't really done so against Rodgers. He maintains a long track record of success versus Detroit, including a 7-1 record at Lambeau Field. Patricia won't be lulled into the comfort zone against the two-time MVP by one win at home last season.

"For us, whatever we did last week, whatever I did a year ago, whatever I did 10 years ago is not really going to help us this week against Green Bay – and certainly against the quarterback that we have to face this week and what a great player he is," said Patricia, who also took a loss to Rodgers as the Patriots defensive coordinator in 2014.

Rodgers is off to a solid start in his first season under head coach Matt LaFleur. He's thrown six touchdowns to one interception and owns a passer rating of 93.4 -- down from his career mark of 102.8. The 4-1 Packers sit atop the NFC North.

Patricia sees some wrinkles in Green Bay's new offense, but it all comes back to the man under center.

"When Aaron Rodgers gets to the line of scrimmage, his ability to change plays, the check-with-me’s, the audibles, some of the RPOs they’re mixing in now where he can just throw it out to the receivers -- and we know how good their skill players are. Devante Adams obviously, (Marques) Valdez-Scantling, (Geronimo) Allison, Jimmy Graham at the tight end position. They just have so many weapons that he can get the ball to," said Patricia.

It's a big challenge for the Lions defense, and an even bigger game for the team. Green Bay is already 2-0 in the division. Another win Monday against the Lions and they'll be hard to track down. Rodgers has delivered his share of crushing blows to Detroit in the past. It's been three years since his last.

“I think you guys know me well enough to know that I’m extremely competitive and I want to win," he said. "Everything that I do, I’m trying to make sure I do to the best of my abilities. But when you’re staring across the line of scrimmage at Aaron Rodgers, you know that you have a long day of work in front of you. That’s all we’re just focused on right now.”