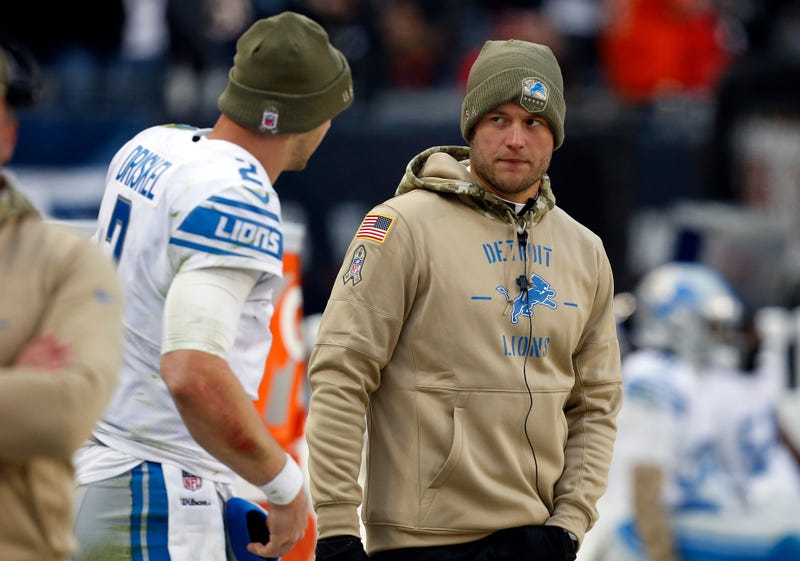 Photo credit Nuccio DiNuzzo / Stringer
By Will Burchfield 97.1 The Ticket

Late Saturday night, after a chat with Matt Patricia, Matthew Stafford came to the realization that his streak was over. For the first time since 2011, he wouldn't be starting at quarterback Sunday when the Lions took the field in Chicago against the Bears.

"It was tough," Stafford said Monday. "Obviously I want to be out there with the guys. I think it was the right decision, a collective decision, but it’s tough. I love playing this game, work really hard to try and be out there for my teammates and wasn’t able to do it, so tough pill to swallow."

Stafford was held out of action by team doctors due to fractured bones in his back, according to Adam Schefter. Jeff Driskel started in his place in Detroit's 20-13 loss. It was a surprising turn of events after Stafford said last week that he wasn't worried about the injury and that he'd be good to go by Sunday.

He said Monday he felt fine throwing the ball in practice.

"I felt pretty good, I felt really good. I took as many or more reps than I normally do, to tell you the truth," said Stafford.

But a back scan Friday night revealed the injury was worse than originally thought.

"It surprised me," Stafford said. "Definitely had a bunch of discussions and a bunch of people look at it to try and see if there was anything I could possibly do to help my chances of playing. And ultimately I think made the correct decision."

Stafford reportedly played through a broken back toward the end of last season, but he said this injury is different. He's also dealt with a hip injury for much of this season.

Moving forward, Patricia said Monday that Stafford is "truly day-by-day, week-by-week." He'll likely practice again this week with the hopes of playing Sunday against the Cowboys.

"I’m going to do everything I can to be out there, you guys know that," Stafford said. "I think that’s just something that’s going to be a decision week to week, whether or nor I can make it out there."

On one thing, Stafford was clear. Despite his ailing body and Detroit's slim chances of making the playoffs, has no intentions of shutting it down for the season.

"That’s not my thinking at the moment," he said. "My thinking is to try and be out there as soon as I possibly can to help us win."

Having made 136 straight starts prior to Sunday, which stood as the second longest streak among active quarterbacks, Stafford had no interest in sitting out. He said he made his case to play. He even toyed with the idea Saturday night of dressing for the game, in the case of an emergency at quarterback.

In the end, he was forced to watch from the sidelines.

"At a certain point I have to do what’s best for the team, too," Stafford said. "I wanted to make sure that I gave myself as much opportunity, as much time as I possibly could. Knew I wasn’t going to be able to start the game, but just wanted to be available if they needed me to finish the game handing off or holding a kick -- I don’t know, something.

"I’m just trying to help our team win, and ultimately I think made the right decision of giving my pads to somebody else and letting them go play."

Stafford commended the performance of Driskel, who went 27-46 for 269 yards, one touchdown and one pick. He also flashed his speed with 37 yards on five carries.

Asked what it was like to watch the game with no control over the outcome, Stafford smiled and said, "It was an odd feeling. I was probably in one of the weirdest places I’ve been mentally in a long time watching that game, but was just trying to pull for the guys.

"Obviously it was a close game down to the wire, so I was just hoping we could come away with it."