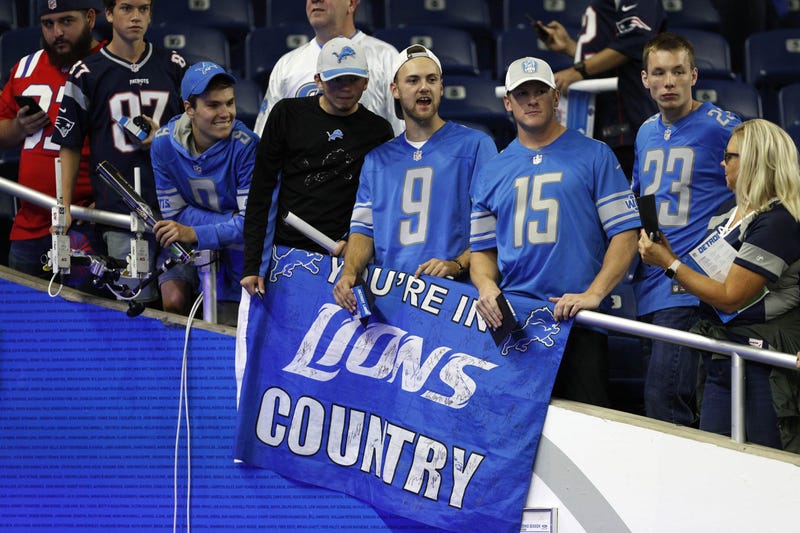 Does any (bleeping) city have it (bleeping) worse than (bleeping) Detroit?
The answer is no. Bleep no.

Since 2017, Detroit's four major pro sports teams own a record of ... wait for it ... 346-543-1. That's a winning percentage of .389, good for dead last among the 13 U.S. cities/metropolitan areas that are represented in each of the four major sports. Just how poorly does Detroit stack up? No other big-four city has a winning percentage below .440 during that span.

Over the past three years, we've watched one winning team out of 12: the 2017 Lions, who went 9-7 for the second straight year and then fired their head coach to bring in the guy who would "take them to the next level." Whoops. Matt Patricia and the Lions are 9-16-1 since.

Think about that. Three years, 12 teams, one winner. Maybe the Pistons will push that to two this season, but they're not exactly on track at 4-9. Compare that with Boston, where the winning is almost gluttonous. Boston's four teams are 543-345 (.611) since 2017, which means you could remove the Bruins and Patriots from the equation altogether and the city would still have some 50 more wins in that span than Detroit.

Boston's an unfair standard, of course. Compare Detroit with, say, Minneapolis-St. Paul. The four teams of our friendly Midwest brethren are 471-417-1 (.530) since 2017, including eight winning seasons and five (likely soon to be six) playoff berths. Detroit has one playoff berth in that span, and it ended with the Pistons getting run out of the gym by the Bucks.

Having fun yet? Now here's the truly unsettling part: it's not really clear when the losing will stop. The Tigers and Red Wings are stuck in rebuilds that are still at least two years away from anything close to completion. It'll be another "challenging season" for the Tigers in 2020, Al Avila said last week. Steve Yzerman would likely tell you the same about the 2020-21 Red Wings.

The Pistons, for as admirable (or ill-advised) as their win-now M.O. might be, probably aren't winning anything until they seriously alter their roster. Like, with dynamite. For those who resist this, the Pistons got more than they could have possibly wished for last season from Blake Griffin and backed into the eighth seed in a bad Eastern Conference at 41-41. Their ceiling is what it is.

As for the Lions, well, the general manager who was supposed to build them into a consistent winner is three games under .500 in four years at the helm. And the coach was supposed to take them over the top is (or at least should be) squarely on the hot seat halfway through his second season. For those who resist this, what more are you masochists waiting to see!?

To be fair, the Tigers and Red Wings deserve a little slack. They had no choice but to rebuild after long runs of success, even if they dug themselves deeper holes than they needed to. At the same time, that slack is starting to run out. It's not just the continued losing at the top; it's really not that at all. It's the lack of progress below, with neither team's farm system glittering with the kind of talent it should be by now.

Yzerman isn't complicit here, and he'll get plenty of time to fix things. As he should. But Avila, who was randomly handed a two-year extension last season, should be feeling the heat more than anyone in this city. That's not to absolve any of our team's owners, but Martha Ford, Tom Gores and the Ilitches decide their own fates, and it doesn't feel like they're yielding control anytime soon.

Look, Detroit isn't the only major sports city having a rough go of it right now. Frustration is probably similarly high in places like Chicago, New York, Phoenix and Miami, although Miamians are too drunkenly beach-dazed to care. But at least each of those cities has at least one team to hang its hat on. If you're curious, here's what the total picture looks like since 2017. I sort of resent myself for doing this research.

So there you have it. The only city that's remotely close to Detroit's across-the-board ineptitude is Miami, where pro sports are more of an amusement than an investment. Around here, our teams mean a lot, to our pride, to our happiness, to our collective psyche, and they've been letting us down in epic fashion three years running -- and it's honestly more like five, but someone else can take the research from here.

I'll be cracking a Bud Light, and toasting to a future that can't come soon enough.