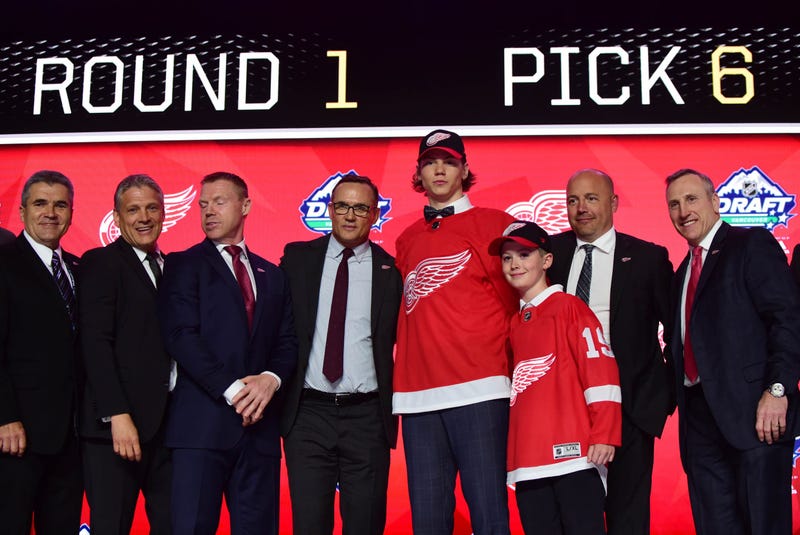 Photo credit © Anne-Marie Sorvin-USA TODAY Sports
By The Morning Show With Stoney and Heather 97.1 The Ticket

If the safe play was drafting a center like Dylan Cozens or Trevor Zegras, the Red Wings made the bold one last week in taking defenseman Moritz Seider. At sixth overall, Seider was said to be a reach.

Here to echo that sentiment is the coach who helped Yzerman win his three Stanley Cups.

"Steve, he doesn’t care," Scotty Bowman told the Jamie and Stoney Show on 97.1 The Ticket. "What you have to do running a team is, sometimes you have to try to hit some home runs. And I think this guy could be a home run. I really do. I know from the talk about him that he was good the last part of last year."

As an 18-year-old playing in Germany's top pro league last season, Seider showed the maturity of his game. He's a terrific skater who's calm under pressure. He moves the puck quickly and cleanly. He thinks the game a couple plays ahead.

When Seider put a stamp on his strong season at the World Championships last month, his draft stock really began to rise. The Red Wings were far from the only team in on him. Bowman, a senior advisor for the Blackhawks (his son Stan is the team's GM), said Seider was a trending name across the NHL.

And the league could get to know him quickly.

"I don’t know if he’s ready to come in right away, but he’s very close because he played against men. And I know that the Blackhawks had him rated really high. Everyone had him rated high. He was either going to be the second or third defenseman drafted," said Bowman.

He was the second, as it turned out, two picks after consensus top blueliner Bowen Byram went to Colorado. Philip Broberg went two picks later to Edmonton. Byram was the name everyone knew, in part because he spent the last three seasons in the spotlight of the Western Hockey League.

But in hockey circles, Seider was generating lots of buzz himself.

"He had a great tournament playing against men for Germany, and he was on the radar. He was on the radar last year," Bowman said. "Big, strong right defenseman. Steve made a trade with LA (in 2017) for a Slovak player named Erik Cernak. Big defenseman, right-hand shot, really good. He’s with Tampa now, they got him in a trade for Ben Bishop. This player is very comparable to that player."

"I would say Detroit’s getting closer," said Bowman. "Some of those teams are getting chopped up, and Detroit’s not. They got a half a dozen players now in the system that I think are going to be players for quite some time.

"The cap system’s so hard because when you start getting some good players, the tough part is signing them for term and how many can you keep. But Detroit’s in pretty good cap shape. They had existing contracts for a long time, but they don’t have many now, and that’s the secret."

Bowman also touched on the Hockey Hall of Fame candidacy of Chris Osgood, who once again came up short when the 2019 class was announced Tuesday. Bowman was a Hall of Fame voter for several years.

Osgood's case is built on his three Stanley Cups and 401 career wins, the latter of which ranks 13th all time. Only one retired goalie who has more wins -- Curtis Joseph (454) -- is on the outside looking in.

"His name has been up. I haven’t been on the committee now for two years. Goaltenders, it’s been really difficult," Bowman said. "The goalies they talk about that aren’t in now are Chris Osgood and Curtis Joseph, and there was one goalie from the 30’s whose name comes up a lot, Lorne Chabot.

"What they talk about the most, what’s hurting him the most to get in, would be the fact that the three Cups -- they keep talking about the Red Wings won three cups in (six) years with three different goalies. Chris, Mike Vernon and Dominik Hasek. ... He’s very close, I can say that, because they go by the win totals."