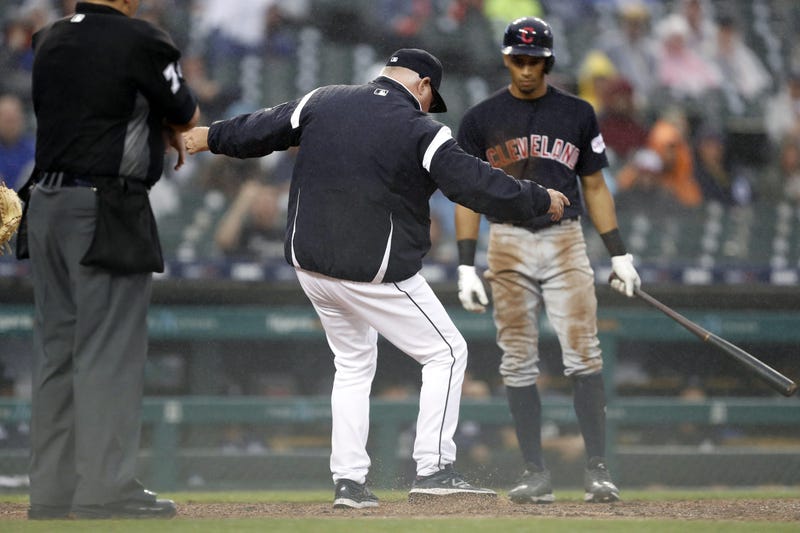 The 13-4 loss on Friday night was one thing. The Indians are miles better than the Tigers, and that kind of gap can be impossible to bridge. The 4-2 loss on Saturday was something else.

The Tigers didn't lose this time because they were outmatched. They lost because they played carelessly, repeating many of the same mistakes they've made all year. Blame it on youth, but bench coach Steve Liddle, who took over for Ron Gardenhire after the manager was ejected in the sixth inning, was clearly peeved with the team's performance.

"The way we played tonight, some of the things that we did, unacceptable," Liddle said. "Unacceptable."

Sloppiness in the field popped up throughout the game. It was ugliest in the top of the eighth, just after the Tigers had trimmed the deficit to 3-2, when reliever Victor Alcantara and third baseman Dawel Lugo combined to allow Leonys Martin to steal home.

Lugo was playing well off the bag, inviting Martin to take a lengthy lead toward home. And Alcantara had his head down on the mound, only realizing Martin was on the go when it was too late. Two rookies outfoxed by a veteran.

"That's a Little League play," Liddle said. "For a right-handed pitcher to allow a runner that's directly in front of him, and then our third baseman not going over towards the bag as Leonys was walking down the line, that's Little League stuff."

Indeed, Martin said he took advantage of the lack of awareness on the part of Lugo and Alcantara.

“He keeps his head down every single time. After I saw a couple pitches, I said this is the right moment, this is a good opportunity. The third baseman helped me a little bit in that decision, because he was far away from the base," said Martin.

The only reason Martin was on third in the first place is because Christin Stewart permitted him to tag up from second on a fly ball to left field. Had Stewart played the ball correctly, Martin likely would have stayed put. Instead he took off for third, and Stewart's throw wasn't all that close.

Another rookie, forgetting the details of the game.

"It's all about getting behind the ball, catching the ball on the proper side and getting your momentum toward the area where you're going to throw the ball," Liddle said.

Stewart did none of those things, and Martin advanced with ease.

"It's the mental side of the game that separates you up here," said Liddle. "Everybody has major-league talent. It's who can control their heart rate and keep their head during key situaitons. Those are the guys that stay here and move on to bigger and better things."

Look, this season was never supposed to be anything more than a stepping stone. And the Tigers have been ravaged by injuries, especially in the infield. Their 25-42 record doesn't come as a surprise.

But for a number of young players, this is an opportunity to prove they can be part of the future. And if they don't start proving that soon, who knows how much longer they'll be around. It's not about playing mistake-free baseball. Such a thing doesn't exist. It's about turning the inevitable mistakes into lessons.

"We have got to learn from our mistakes," said Liddle. "The general idea is that you don't have to keep repeating the same thing over and over. But the answer to that is, how many times do you tell a guy? The answer is, one more time, until somebody up above says, 'Hey, that's enough. We'll move on and move forward.' Hopefully they get it and it's a learning experience for the guys."

It wasn't just rookies at fault Saturday night. Nicholas Castellanos misplayed a fly ball so badly in right field that it turned into a double, the key knock in the Indians' thee-run fifth. If there's any silver lining, Liddle liked the way Castellanos handled it.

"Nick came in (the dugout) and said, 'I just really botched that one. It carried a lot further.' That's a player owning up to a mistake," Liddle said.

Alcantara owned up, too, admitting to his blunder on the mound. For a team that -- realistically or not -- slapped a picture of the World Series trophy on the door of the clubhouse the first day of spring training, things haven't exactly gone according to plan. Saturday night was just the latest reminder.

"We catch the ball, we make some plays, it's a different ball game. And we've been saying that a little bit too much here lately," said Liddle.

You know the word.