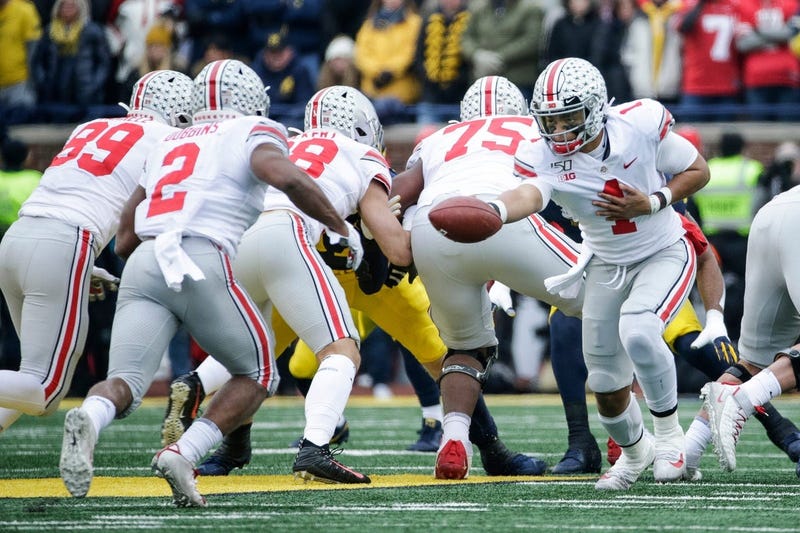 Make it eight straight for Ohio State over Michigan, and 15 of the past 16.

The Buckeyes rolled the Wolverines once again on Saturday, this time by a score of a 56-27 at the Big House. It's the third time in the Jim Harbaugh era that Ohio State has won by more than 20 points.

"I just think we take it more serious than they do,” said quarterback Justin Fields, who threw for four touchdowns Saturday. “We prepare for it all year. Like (strength) coach Mick (Marotti) said, we’re preparing for them next year right now. I think it just means more at Ohio State. That's pretty much the bigger reason why we have more success than they do."

Strong words from Fields, who transferred to Ohio State this year from Georgia. He didn't grow up in this rivalry. He hasn't been schooled in it for the past several years. He entered it about 11 months ago, immediately grasped its significance, then left his fingerprints all over it in his debut.

Judging by the players he knows at Michigan, Fields said the Buckeyes put The Game on a different level.

“I just know the things we do in terms of workouts and how serious we take it at Ohio State. Talking to those guys and kind of getting their perspective on things, I definitely see that we take it way more serious," he said.

Throughout the week, the Wolverines said they were eyeing this rematch since last year's loss. Co-captain Ben Bredeson said they were thinking about it every day. Then it came, and Michigan got steamrolled.

It's one thing to focus on it. It's another to actually start planning for it, and maybe this is where the Buckeyes set themselves apart.

"We prepare from January, February, winter, summer, spring, we prepare just for this game. We've got certain things just for this team," said wide receiver Chris Olave, who caught two touchdowns against Michigan last year and a third this year. "We respect the program but we always want to win this game."

Ohio State head coach Ryan Day, who joined the Buckeyes staff in 2017, said it was a relief to win in his first year at the helm.

“To say there's not stress coming into a game like this would be a lie. There's so much riding on a game like this. You understand, you feel the weight of everybody involved with it," he said. "And to win like this right now is a relief. It is. I'm just so happy for these guys."

Day took over for a coach in Urban Meyer, of course, who owned the rivalry himself. He knew it was his responsibility to continue that trend.

“Ever since I took the job it’s been on my mind. I know what this game means to the people of Ohio, the Buckeye nation. Coming on the heels of one of the greatest coaches in the history of college football, who went 7-0 here, those are big shoes to fill," said Day.

He filled them just fine in his first opportunity, leading the Buckeyes to their most lopsided win in The Game since 2015. That was another 29-point drubbing, also at the Big House, in Harbaugh's first year as head coach.

Not much has changed for Michigan since.

“There's so much that goes into this game," said Day. "We live it year-round.”