As it turns out, we probably set unrealistic expectations for just how good the Kansas City Chiefs-Baltimore Ravens Monday Night Football matchup in Week 3 would be.

On one hand, it's hard to overstate how crucial a matchup between the two teams previously in the top two sports on our power rankings is, because under the NFL's new postseason rules, only one team in each conference gets a bye. On the other hand, that doesn't automatically mean that when the two teams meet, it will prove to be the best game of the season.

What many believed had a chance to be the most entertaining matchup of the 2020 NFL season was never especially close, as the defending Super Bowl Champion Chiefs went into Baltimore in Week 3 and won by two touchdowns, 34-20.

Perhaps this game served as a reminder that for as dominant as Lamar Jackson and the Ravens have looked since the start of the 2018 season, this is a team that really struggles to play from behind.

The bigger takeaway, from here, is that the Chiefs look like a team with a chance to be the best team wire-to-wire in the 2020 season, and repeat as Super Bowl Champions. Injuries and COVID-19 could change that, but Andy Reid and Patrick Mahomes appear to be able to toy with people at will right now. Monday evening's game was the latest reminder that Mahomes may be the most talented quarterback in NFL history, even passing up players like Aaron Rodgers in that category, something that once seemed unthinkable.

The Ravens didn't fall too far in our latest RADIO.COM Sports NFL Power Rankings, but if there was any thought that the Chiefs maybe weren't the top team before Week 3, it's been eliminated now: 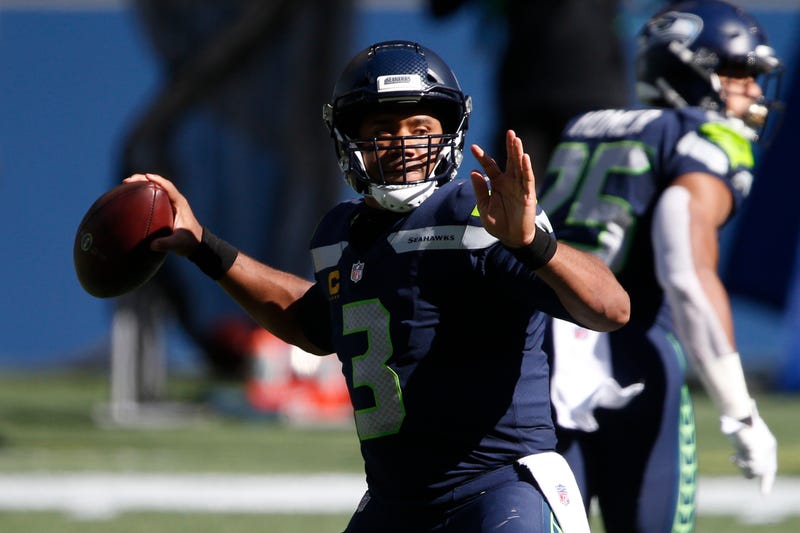 Russell Wilson is off to a scalding-hot start. Photo credit (Joe Nicholson/USA Today)

The Year of Russell Wilson

It's perhaps become an overused nugget at this point to cite that Russell Wilson has never received an MVP vote, but you get the sense that the future Hall of Famer got tired of hearing about it and is on a mission to change that in 2020. After finishing as the runner-up in NFL MVP voting a season ago, Wilson has opened the 2020 season by tossing 14 touchdowns to just one interception and leading the Seahawks to a 3-0 start. If not for a fairly egregious tip by Greg Olsen in Week 2 and D.K. Metcalf allowing a sure touchdown to be punched out of his hand on the one-yard line in Week 3, Wilson may have 15 touchdowns and zero interceptions right now. In any event, Wilson is the early MVP favorite, and his Seahawks seem as good as any team in the NFC right now. 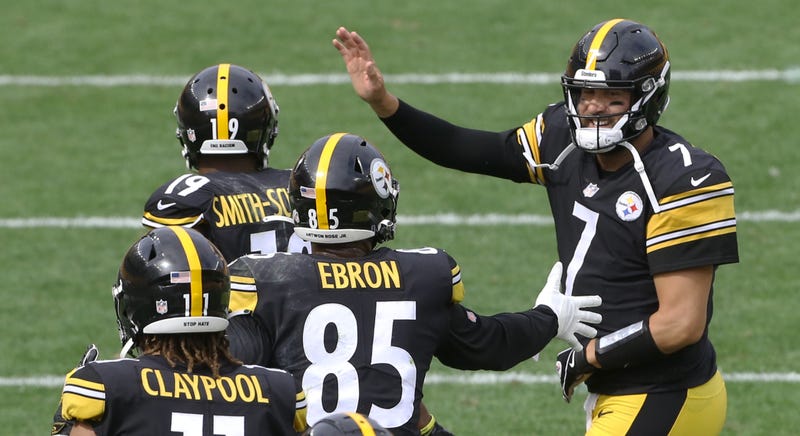 The Steelers are off to a quick start in 2020. Photo credit (Charles LeClaire/USA Today)

Quietly, the Steelers Are 3–0

For all the talk there was leading up to the season about whether Ben Roethlisberger could return at age-38 from a major elbow surgery, he's done so and to this point the Steelers are 3-0. Certainly, an elite defense led by Bud Dupree is a major reason for that, but over the Steelers' first three games, Roethlisberger has tossed seven touchdowns to just one interception. It feels like every team in the AFC that isn't the Chiefs is playing for runner-up, but with a few more wins, the Steelers could play themselves into the discussion for teams with a chance of knocking off the Chiefs in January. 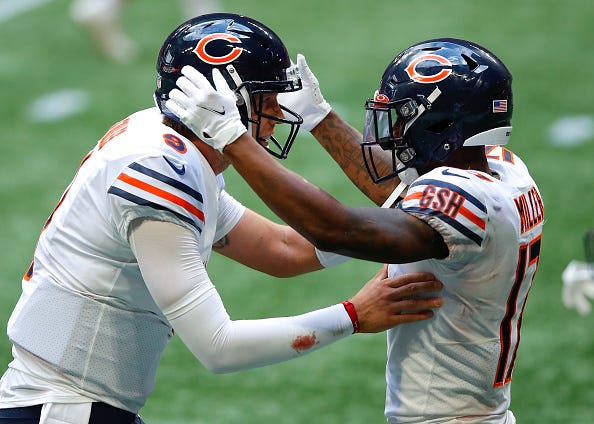 Nick Foles has taken over as the starter for the Bears. Photo credit (Todd Kirkland/Getty Images)

Nick Foles has long since cemented his status as the greatest backup quarterback in NFL history, but he added onto the legend in Week 3, replacing Mitchell Trubisky and tossing three touchdowns in a comeback win against the Atlanta Falcons. The test now will be to see whether he's able to thrive as a starter. Despite tossing 27 touchdowns in 2013 and leading the Eagles to a Super Bowl title in the 2017 season, he's never played more than 11 games in a regular season. If all goes well in 2020, Foles will play 14 games and the Bears will return to the postseason. If not, he may never get a chance to start in the NFL again. 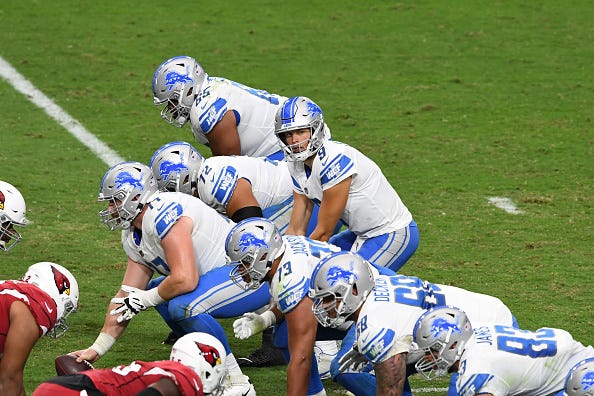 Matthew Stafford and the Lions got their first win of the season in Week 3. Photo credit (Norm Hall/Getty Images)

What Exactly Are the Lions?

Even with a blowout loss to the Green Bay Packers in Week 2 acknowledged, the Lions could very easily be 2-1 right now. They went into Arizona and handed Kyler Murray and the Cardinals their first loss of the 2020 season. If D'Andre Swift catches a ball Matthew Stafford placed perfectly on his hands in the endzone late in the team's Week 1 loss to the Chicago Bears, the Lions could easily be 2-1 right now. Week 4's matchup with the New Orleans Saints will be an interesting test for the Lions. At this stage, Stafford is almost certainly a better quarterback than Drew Brees. But is Matt Patricia up to the task of out-scheming Sean Payton? 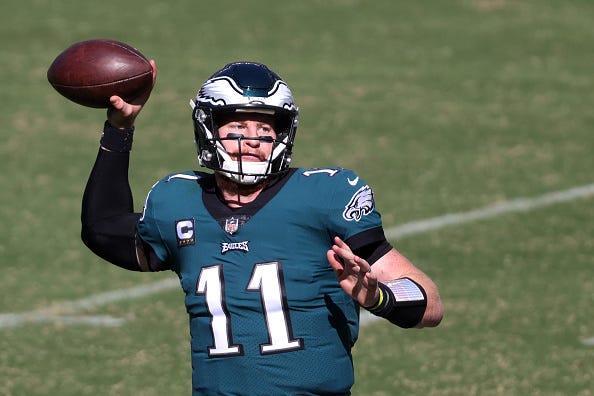 Carson Wentz is off to a rough start in 2020. Photo credit (Rob Carr/Getty Images)

Carson Wentz has had his issues with fumbling, but in each of the last three seasons, he's thrown just seven interceptions. In his four prior season in the NFL, picks have been few and far between for Wentz. However, through the Eagles' 0-2-1 start, Wentz has already been picked off six times. In recent years, general manager Howie Roseman has done a pretty poor job of surrounding Wentz with talent. After looking like one of the NFL's elite head coaches in the Eagles' run to winning Super Bowl LII, Doug Pederson has been relatively uncreative in each of the last three years. There are issues in Philadelphia that run deeper than Wentz, but in 2020, he hasn't been a solution to the organization's problems, he's added onto them. Wentz would have been the NFL MVP if not for tearing his ACL in 2017, and rallied the troops for a run to the postseason last December. But his development has been underwhelming, and it is fair to wonder if he's ever been able to move past another quarterback leading his team to a Super Bowl title in his absence. 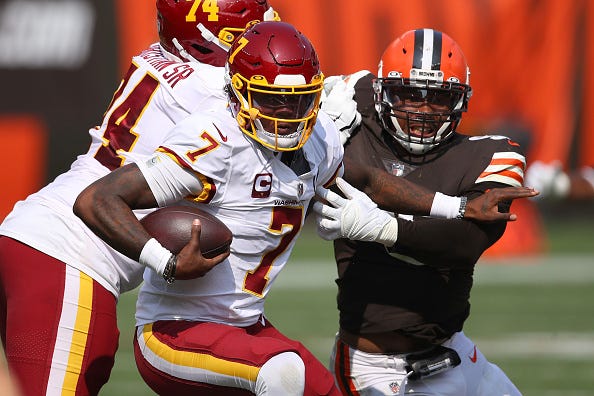 Even with a surprise win over the Philadelphia Eagles in Week 1, it appears that the leash on Dwayne Haskins may be getting pretty short in Washington. The 2019 first-round pick was picked off three times in a loss to the Cleveland Browns in Week 3, with head coach Ron Rivera later admitting that there is "a cut-off point" for when he'll seriously consider benching the second-year quarterback. It's unclear if Alex Smith could actually play in an NFL game right now, but Kyle Allen had some pretty competitive stretches in Carolina with Rivera a year ago. In a very winnable division, Haskins may be playing for his starting job in Week 4, when he'll have the unenviable task of squaring off with an angry Baltimore Ravens team.