Though the Los Angeles Chargers certainly had some head-scratching moments throughout the 2020 season that ultimately led to the firing of Anthony Lynn, it's hard to deny the fact that their offensive attack was quite potent. Mind you, Justin Herbert is very good, but running an offense with a rookie quarterback at the helm can be a challenging task, and perhaps that's the sort of creativity and insight the Detroit Lions were looking for.

According to ESPN's Dan Graziano, the Lions are hiring Lynn as their offensive coordinator.

Per sources, the Detroit Lions will be hiring former Chargers coach Anthony Lynn as their offensive coordinator.

Whether or not Matthew Stafford is the Lions quarterback for the 2021 season, young offensive stars like D'Andre Swift and T.J. Hockenson will continue their upward trajectories toward stardom under the experienced eye of Lynn. Before serving as the Chargers head coach, a position he held for four seasons, Lynn was the running backs coach for the Jaguars, Cowboys, Browns and Jets. He assumed assistant head coach duties in his final two seasons with the Jets before the Bills brought him in as their assistant head coach and, eventually, their offensive coordinator.

In the five seasons that Lynn has been either head coach or offensive coordinator in the NFL, all of his offensive units have finished in the top half of the NFL in yards gained, and only once outside of the top 20 in points scored. With the Chargers in 2020, Herbert and company finished with the ninth most yards gained and had the fourth fewest giveaways of any team in the league.

According to ESPN's Adam Schefter, Lynn had other options on his plate but wanted to work with new head coach Dan Campbell and defensive coordinator Aaron Glenn, who have a past connection.

Former Chargers' HC Anthony Lynn had OC options, but wanted to work with Lions' HC Dan Campbell and DC Aaron Glenn, who played for the Cowboys at the time Lynn coached in Dallas. https://t.co/L0kgS8aPNV

Now all we need to know is what Anthony Lynn thinks about his opponents' kneecaps. 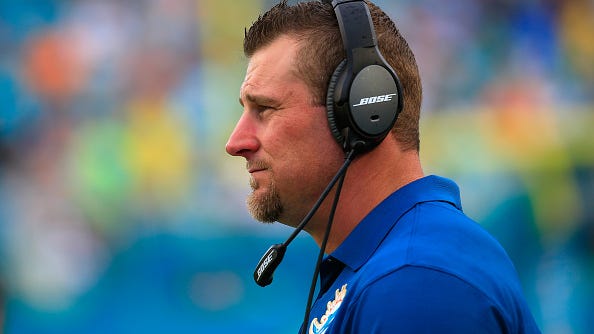 Mark Schlereth: 'I don't care how many kneecaps you bite,' Lions not talented enough