It’s early, it’s so, so early. Too early to know what any of Troy Weaver’s first four draft picks for the Pistons will become.

Maybe Killian Hayes will turn into ‘a bigger version of Goran Dragic,’ as Weaver suggested last week. Maybe Isaiah Stewart will be the modern-day center who makes us forget about Christian Wood. Maybe Sadiq Bey will be the sharpshooting wing who makes us remember Tayshaun Prince. Maybe Saben Lee will make every other team wonder what it missed.

And maybe they won’t. Maybe, in a few years, Hayes, Stewart, Bey and Lee will be scattered across the NBA and we’ll do this whole thing over. The worst-case scenario is more likely than the best. That’s the nature of the draft.

But right now, everything feels possible, which is more than we’ve been able to say about the Pistons for a while. Detroit entered the draft with one pick at its disposal and walked away with three first-rounders for the first time in over 40 years, plus a second-rounder for good measure.

“As I said from the onset, we really liked the draft,” Weaver said Wednesday as the Pistons introduced their future. “We just felt there were quality young men who could help continue to build our program, so we were aggressive trying to acquire picks.”

Hayes is the crown jewel, a 19-year-old point guard who could be Detroit’s table-setter for the next decade or two. Stewart and Bey – and Sekou Doumbouya – could be feasting alongside him. You start to reach when it comes to Lee, but the Pistons liked him enough to send a wad of cash to the Jazz for the rights to the pick. 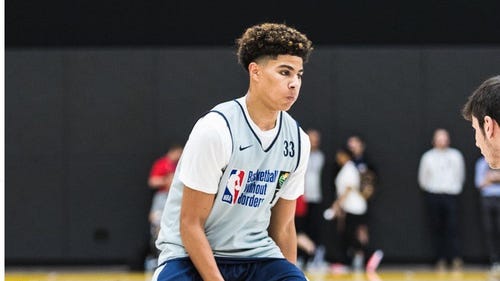 “These guys fit Detroit basketball,” said head coach Dwane Casey. “They’re hard-playing, hard-charging. They’re high-character guys, but they’ll knock you on their butt when it comes time to. That’s one thing we like about them. They can lay that character to the side when they get out on the floor and compete.”

The Pistons brought Weaver here for this very purpose, to build the team through the draft. He didn’t mess around when the draft arrived. He jockeyed for new picks and jettisoned old ones, turning over the roster in a matter of days. Doumbouya is the only real building block that remains from the previous regime, because Weaver decided he was the only real building block to begin with.

Now he sizes up the foundation and sees the makings of something sturdy. Something stable, sustainable and successful. Ideally something special.

“We just felt we had to act on this opportunity,” Weaver said. “I’m a huge sports fan and I remember the Yankees built around their Core Four. We got these four guys and hopefully we can look back in time and call this our core four.”

For the Yankees, that quartet was comprised of Derek Jeter, Mariano Rivera, Andy Pettitte and Jorge Posada. Together, they played in 35 All-Star Games and won four World Series titles. The Pistons haven’t won a playoff game in more than 10 years. They won’t be ending that skid anytime soon. Whenever they do, the hope is that a new streak is born.

What the Pistons are aiming for is an era, like the Bad Boys that came first, like the Goin’ to Work teams that came next. Eras evolve slowly. The payoff requires patience. Take it from the Yankees, who nearly traded Rivera and Jeter before they ever arrived. One thing that seems clear about the Pistons, they’ll give this group time.

Nothing’s promised, but everything’s possible, and that’s already better than the era the Pistons are leaving behind.

“These four young men embody everything we want for the Pistons going forward,” Weaver said. “Selfless, competitive nature, team guys, talented, but more importantly, great humans. There’s a certain DNA that we wanted to bring in the building, and these guys bring it.”