A lot of people have had a lot to say about Bobby Ryan over the course of his career. By the end of last season, the consensus was rather clear: he's a great person who's no longer a great player. Even Ryan seemed to accept it. When asked which parts of his game appealed to Steve Yzerman after signing a one-year, $1 million deal with the Red Wings back in October, Ryan laughed -- because Bobby Ryan tends to laugh a lot -- and said, "Not my skating."

Here's what did appeal to Yzerman. Ryan can still shoot the puck, and he shoots it from the right side. All but two of Detroit's returning forwards were left-hand shots. He can still create offense with his skill, the same skill that made him the second overall pick in the 2005 draft, the same skill that helped him score 30+ goals in four straight seasons before the age of 25, the same sort of skill the Wings have been lacking for a long time. (I mean, come on.) Detroit is last in the NHL in goals per game over the last five seasons.

"He’s still at a young enough age that he can play," Yzerman said at the time. "He’s got talent, he can score, he’s in good shape. He’s worked hard. He’s dealt with a lot of things off-ice and he’s in a good spot right now, so I’m excited to have him here. I think there’s potential for Bobby to have a real impact on our team."

Here's what else appealed to Yzerman about Ryan, what appeals to everyone about Ryan: his joy for the game. So you can imagine the depth of his troubles when he chose to leave the game behind last season -- in Detroit, of all places -- to check himself into a rehab center in California for alcohol abuse. He returned three months later with the same smile and maybe the step or two he'd lost. 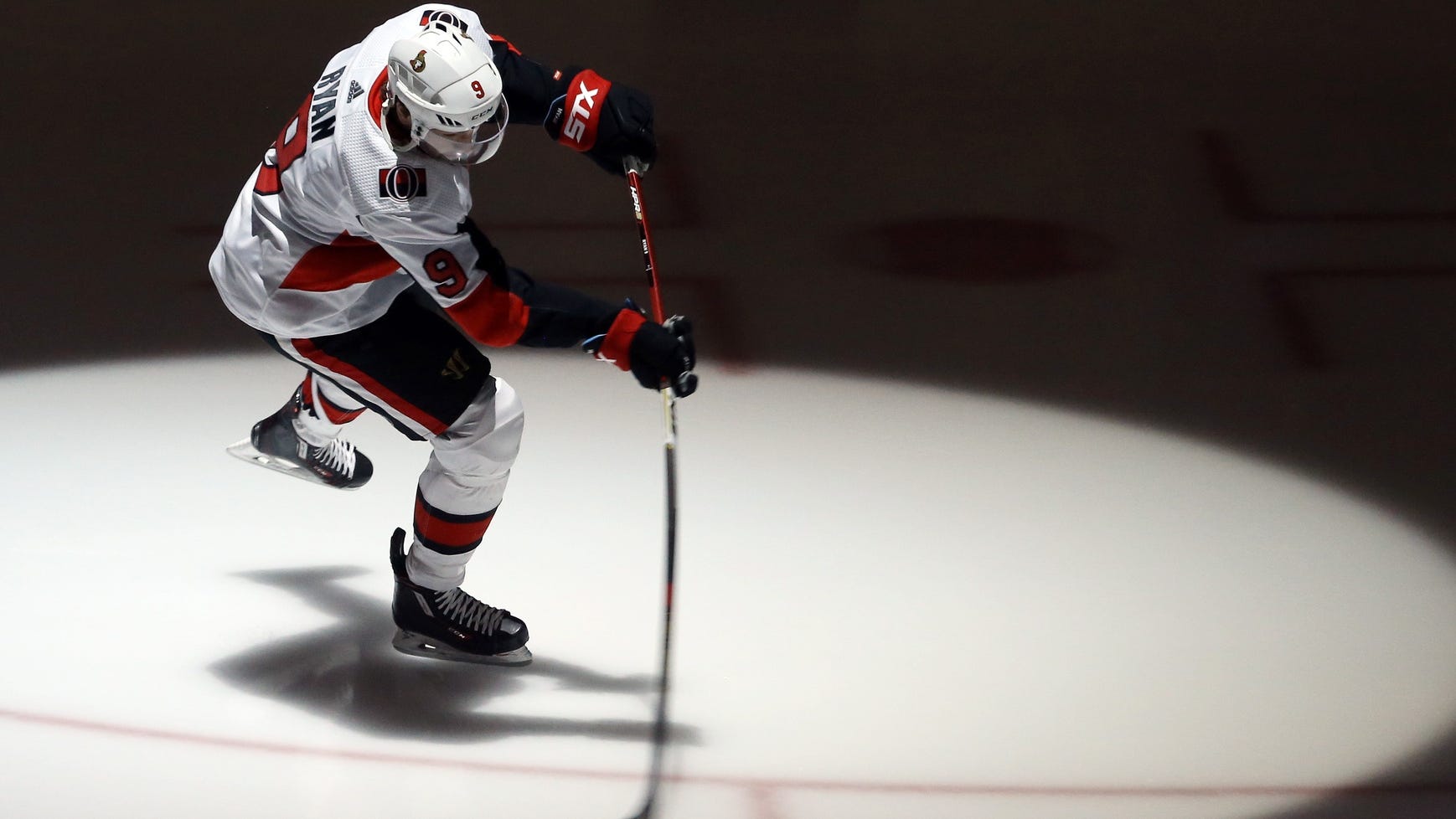 Detroit has played a big role in the life of Bobby Ryan. He returns hoping to stay.

Ryan was a star when he was traded from Anaheim to Ottawa in the 2013 offseason. He helped the Senators come within a game of the Cup Finals in 2017. Then Ottawa opted for a rebuild, and Ryan's game, which had already been wilting under the pressure of his addiction, started to decay. He was left to be the leader on a losing team. He said last year he "resorted" to fighting to help make an impact.

And you know what? Ryan sort of loved it. Not the drop in his own play, not the extra pain in his arthritic fingers from punching helmets, and certainly not the losing. But the role of mentor suited him well. He took time to work with the team's younger players on their skills after practice. He helped them find their bearings during games. Consciously or not, Ryan provided a model for being a pro.

"I just like seeing them get better," he said. "If it’s something that I can impart on them, I can watch that come to fruition and watch them learn something new. I genuinely like helping guys with those kind of things. Watching the kids grow and become better players day in and day out, if I have a small piece of that where they think I helped them, that means a lot to me."

21-year-old Michael Rasmussen woke up Monday morning to the news he was making his season debut at noon. The Wings had placed a couple players in COVID-19 protocol; Rasmussen was now centering the second line. He didn't have time to go through the typical pregame meetings. He didn't have time to do much of anything other than put on his gear and play. He did have Ryan skating on his wing.

"It’s pretty awesome playing with Bobby," Rasmussen said the next day. "Obviously a great player, but just a great guy. He's very supportive. It doesn’t matter who you are, he talks to you and he helps you out. He was really helping me yesterday. ... When Bobby says something to you, you definitely listen and try to take it into your game."

Rasmussen picked up an assist when Ryan jumped on a loose puck off an offensive zone face-off and zipped it past Blue Jackets goalie Joonas Korpisalo. It was Ryan's second goal of the season. He'd notch his third later that game, then his fourth in Detroit's OT win over Columbus on Tuesday. He has his shot to thank for his early success. He'll have his skating to thank if it continues.

Yeah, his skating. Ryan finished last season about 10 pounds lighter than he started it. Cutting out a bottle of wine per day was a good start. He felt quicker when he returned from rehab, quicker than he had in years, and then in the offseason he hired a skating coach for the first time in his career. He said he wanted to "prove to myself" what he's beginning to prove to everyone else: "that I still have some gas in the tank."

"I’ve been really impressed with where his skating’s at," Jeff Blashill said Wednesday. "He's skating really well. He’s obviously put time in. When he’s skating well, he can use his skillset. He’s got really good hands and a really good offensive mind, so when you’re skating like that you’re going to get opportunities."

Yzerman talked to a lot of people around the Senators organization prior to bringing Ryan to Detroit. He got glowing reports on Ryan the person and Ryan the teammate, reports he confirmed by speaking with Ryan himself. And ultimately Ryan the player got a contract that amounted to a flier. Yzerman called it a "no-risk signing." The hope was that Ryan would score. The only expectation was that he'd set the right example.

"For me personally, this was a prove-it year," Ryan said Monday after his two-goal game. "And an opportunity to take the step that I should have taken years ago but hadn’t been able to because of the outside stuff. So (this start) means a lot."

For now, that's all it is. A start. Ryan has put seven pucks on goal and four have gone in. That won't continue. But the jump in his step is back, and he never lost his nose for the net. They were right about Bobby Ryan. He's the kind of player you want in your locker room. Perhaps they were wrong about him, too. He's still the kind of player you want high in your lineup.

sports
Raptors exec reflects on run-in with deputy: 'I lost a moment, others have lost their lives'
music
RADIO.COM LIVE Check In: The Black Crowes discuss their ‘very special’ reunion plans
music
Mariska Hargitay talks about the 'life-changing' moment she met Christopher Meloni
music
Watch our RADIO.COM LIVE Check-In with Ashe
sports
Dez Bryant wants to play 2 more years, but says ‘Baltimore wasn’t for me’
i'm listening
My Chemical Romance's Gerard Way is performing a special set in the name of mental health