Al Avila made no bones about it. This 60-game season was not to the benefit of the rebuilding Tigers.

"I don’t think it helped, by any means," Avila said Friday as he wrapped up a strange year of baseball. "It hurt in the development side."

Of course it did. With the minor leagues suspended due to COVID-19, several of the Tigers' top prospects, including 2020 first overall pick Spencer Torkelson, were shut out of playing games. That's an entire summer of experience they'll never get back.

And this is where Avila would turn to one of his favorite phrases. In saying that, ...

And this is where we can step in: it wasn't a lost season completely.

The Tigers brought many pieces of their future to the present, headlined by Casey Mize and Tarik Skubal. Together, they flashed their talent and took their lumps. They'll be better for it next year. 12 of the club's top 30 prospects in 2019 saw action in Detroit in 2020, with 10 of them making their big-league debuts. Some impressed, others didn't. The results are valuable either way.

The Tigers didn't learn as much about their organization as they would have liked to this season -- but they still learned a lot. Avila said two young players caught his eye as potential building blocks moving forward.

The first comes as a bit of a surprise.

If anyone can attest to the turbulence of baseball in 2020, it was the 23-year-old Cameron. Over the span of a few months, Cameron endured a 'life-threatening' battle with COVID-19, wound up at a training site in Toledo, made his major-league debut in Detroit and recorded one hit in his first 27 at-bats.

"Guys were calling me up from Toledo saying, 'We need to give Daz an opportunity because he’s doing very well,'" Avila said. "So we bring him up, obviously he struggled here at the start, and then all of a sudden he starts to catch on. You saw the defense, this guy has the five tools. He can run, he can field, he can throw and toward the end there he showed us that he’s starting to hit and showed us some signs of prior to the 2019 season of what he can do.

"We feel that he’s got what it takes, he’s got the ability, and hopefully it’s coming out now. So we got to feel good about that toward the end of the season."

Cameron was one of the fastest-moving prospects in Detroit's organization in 2018. He dazzled in spring training the next year and nearly broke camp with the Tigers. "I think in his own mind," Avila said, "he thought he was going to make the club." The Tigers sent him to Triple-A Toledo instead and Cameron hit a wall.

Now that he's starting to break through it, he's back in the discussion of Detroit's centerfielder of the future. 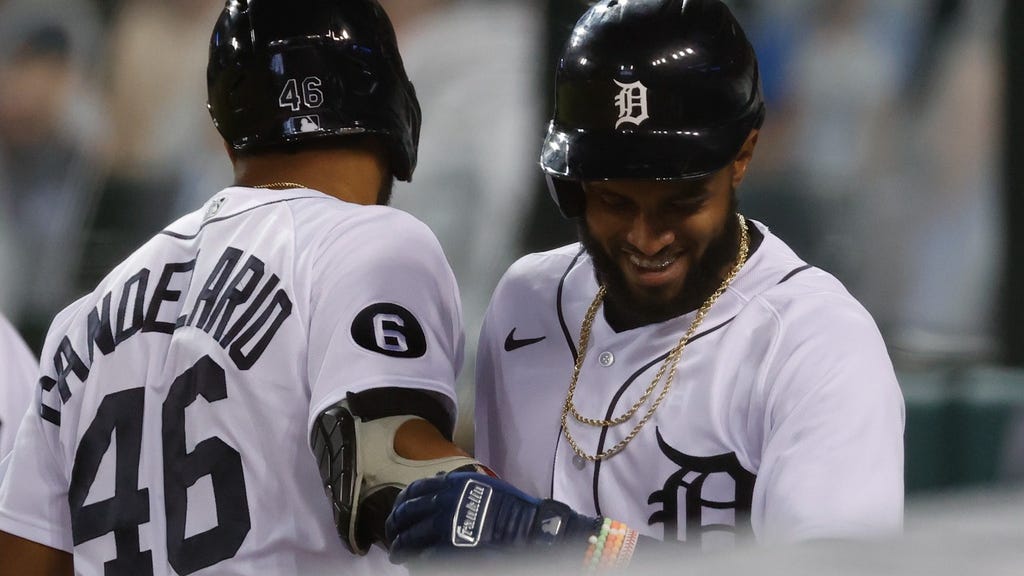 10 takeaways from a refreshing season for the Tigers

The same discussion took a major turn this season at shortstop. Is Willi Castro the guy? The Rookie-of-the-Year candidate certainly staked his claim to the job, at least with the bat. The glove has a ways to go, but it's no surprise Castro was Avila's second name on the topic of emerging players.

"You guys have all the numbers. Offensively speaking, he’s made tremendous strides," Avila said. "He made some adjustments. At shortstop he obviously did struggle a little bit, but there’s been other shortstops in the past who have struggled, too."

Avila pointed to Tim Anderson of the White Sox. In his second big-league season, Anderson was worth minus-22 defensive runs saved, one of the worst marks in the majors. His defense has vastly improved in the three seasons since and "all of a sudden," said Avila, "Tim Anderson is one of the best players in baseball."

"I’m not comparing Willi Castro to Tim Anderson," Avila went on. "I’m not. I'm just saying, sometimes there are struggles at the beginning and then you have to see what the athletic ability is. We feel he has the athletic ability to play anywhere in the infield, quite frankly. At the end of the day, you have to hit. And the guys that hit, you find a place for them."

Castro sure did hit this season. His .349 average ranked first in the AL among rookies, and third in the league overall among players with at least 125 at-bats. His .932 OPS was tops among AL rookies as well. It was almost enough to forget the fact that over 25 games at shortstop, Castro was worth minus-7 defensive runs saved. Only Gleyber Torres of the Yankees, a converted second baseman, was worse.

"I know that in working with Alan Trammell and our minor league staff, he has made some improvements," said Avila. "He took a couple steps backwards at the major league level here with some balls that were hit to him, but I think overall he will be fine and he should be a good everyday guy for us."

Elsewhere in the infield, Jeimer Candelario played himself back into the Tigers' long-term plans. He rebounded after an 0-17 start to hit .297 with an .872 OPS and wound up leading the team in WAR. And he did so while filling in at first base for the injured C.J. Cron. Candelario ended the season on the shelf due to a back issue, but by then he had shown the Tigers what they needed to see.

"Obviously from an offensive perspective, he showed us that you can count on him hitting well enough to play an everyday role at the major league level," Avila said. "We know he can play third, we put him at first out of necessity. At the beginning he was learning the position, but at the end of the day he did an adequate job. So the reality is he can play both now, in our opinion. Probably better at third.

"But I talked with him at the end of the season and he basically said, 'I’ll play wherever the team needs me to play.' We’ll see where it all ends up."

We'll see where it all ends up, for Candelario, for Castro, for Cameron and for this construction project at large. 60 games -- check that, 58 -- could only tell us so much. If it told us anything, it's that pitchers might not be Detroit's only pillars. The bats are coming, and some of them may be here already.