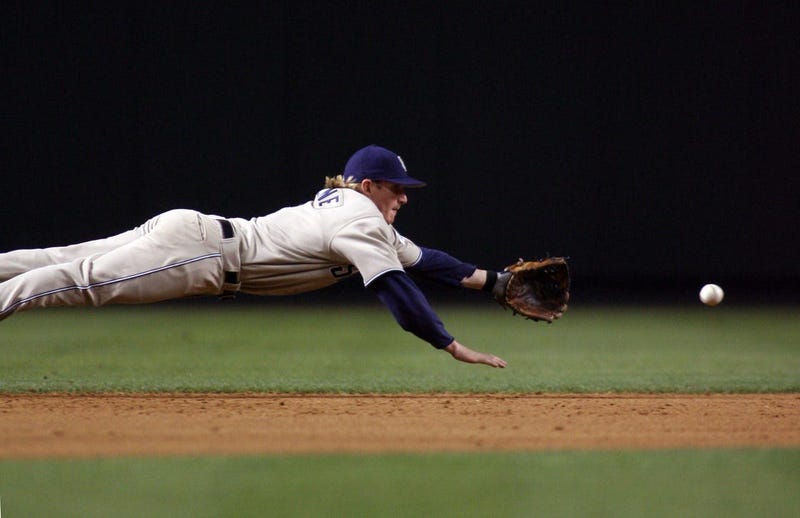 January 10, 2020 01/10/2020 3:35 pm
As difficult as it may be, try to imagine a time in this world where the San Diego Padres didn't have the most incredible talent that the universe has ever witnessed playing the position of shortstop. Allow me to tell you about a time where there once was a San Diego Padre who used to protect the exact territory that our king, Fernando Tatis Jr., is currently reigning, and this legendary Padre brought a sense of electricity that lit up America's Finest City in a way very familiar to the fireworks that Tatis Jr. displays.  I believe it's incredibly important to recognize one of the most dynamic Padres to ever wear the SD.
Mark J. Rebilas-USA TODAY Sports

One of those names that once you hear it, a smile immediately strikes your face as an incredible highlight-reel begins to go on inside your brain with defensive plays that would do everything from taking the words out of your mouth to having your jaw drop straight to the floor in amazement. This dude was the absolute definition of what it means to be a playmaker at the shortstop position with a calm, cool, and collective demeanor that surrounded him each and every time he was out there. Then, of course, there was his iconic surfer-like blonde hair that would flow ever so gracefully as he would go above and beyond to make these unbelievable plays that just continued to get better and better as his career was developing with the Padres. Khalil Greene seemingly had all the tools to be the face of the franchise for San Diego. He was going to be the king and savior that the team was so desperately searching for ever since the retirement of the greatest player in franchise history, Tony Gwynn.

Khalil's story with the Padres began after winning the National Player of the Year award at Clemson University, which was all San Diego needed to see to use their 1st round selection on the future human highlight-reel. Greene was with the big league ball club a year later and that's when Padres fans began to witness the greatest display of shortstop to ever be played in the young history of Petco Park. At first glance, Khalil's physique and body language do nothing to give the impression that he may one day go down as the top defensive shortstop to ever step foot on a baseball diamond, and his personality would have Kawhi Leonard looking like Steve Harvey. He just had this look of a dude that spent the entire day at Sunset Cliffs, then decided to suit up for the Padres to straight-up dominate and this city couldn't get enough of it.

To those that didn't truly experience Khalil Greene, you may roll your eyes when I use the word dominate to describe Khalil's abilities. That same person takes a look at the back of his baseball card and sees that his best year offensively included a respectable 27 home runs and he never had a batting average over .273. Those numbers won't go far in impressing anybody, but in sports, there are players that have an impact that doesn't necessarily make the scorecard at the end of the game, and Khalil is a perfect example of this. Every true Padres fan out there will tell you that Khalil Greene was special. Special in the same way that Fernando Tatis Jr. is special. As cliche as this can sometimes sound, it's the way that these players are able to bring an entire city together to create memories and for everybody to witness the greatness that is taking place in front of them on a daily basis that makes these special type of players essentially immortal in baseball history.

So what went wrong?

Never forget in Spider-Man when Peter Parker's uncle told the young superhero that "with great power comes great responsibility." After Khalil set the Padres' team record for most home runs in a season by a shortstop and was awarded an extension from the team, his responsibility of becoming the face of the franchise seemed set. The very next season is when you could immediately see that we no longer were witnessing the same type of electricity that used to surround Khalil on the diamond. His struggles never seemed to find a way out of his game and after a terribly miserable season, the Padres made a move that will forever bring me sadness when they made the tough decision to part ways with my favorite player of all-time. A moment of sadness that struck the entire city in a way nobody saw coming, and just like that, the player that we once thought would be the face of a championship-contending franchise we haven't seen since the days of #19, would never appear ever again.

The superhuman shortstop for the Padres may have seemed like an alien with his ability to make plays out of this world, but Khalil Greene was just as human as anyone else on this planet, and just like all of us, he had his own issues. Khalil battled with his mental health for what I am sure was his entire life, and in 2009, his social anxiety disorder got the best of him when it was revealed that he was "cutting himself in mental anguish" due to his poor performance with his new team, the St. Louis Cardinals. Without getting too much into just how bad things got for the former star SS of the San Diego Padres, it's easier to just say that Khalil Greene's days of playing baseball to the best of his ability were long gone.
Mark J. Rebilas

But the point of this blog is to remind the world that Khalil Greene won't be remembered for the unfortunate way that his baseball career came to a close, but instead, that he will forever be known as the San Diego Padres shortstop that brought this feeling of electricity to the game that made this San Diego-bred kid idolize him as the ultimate baseball player, and that right there, is what truly made Khalil Greene special.