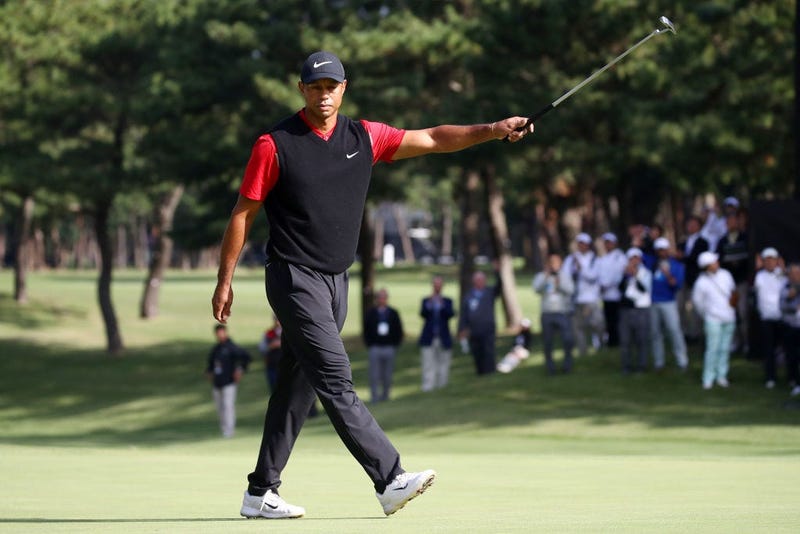 Photo credit OCTOBER 28: Tiger Woods of the United States celebrates winning the tournament on the 18th green during the final round of the Zozo Championship at Accordia Golf Narashino Country Club on October 28, 2019 in Inzai, Chiba, Japan. (Photo by Chung Sung-Jun/Getty Images)
By Ben Higgins, 97.3 The Fan

I still remember where I was,10 years ago, when I heard that Tiger Woods had been involved in a car crash. Of course, we soon heard all the sordid details of Tiger's infidelities and the end of his marriage, the sex rehab and three-year struggle to get his golf game back. In 2013, Tiger rose back to #1 in the game of golf, only to see repeated back injuries bring him down low again.

Now, after spinal fusion surgery and another stint of rehab for painkillers, Woods is back among the world's top ten golfers. His win at The Masters in April will go down as a signature moment in golf history, and his victory last month at the Zozo Championship in Japan was historic, tying him with Sam Snead for most PGA Tour wins all-time (82).

It's hard to imagine a bigger roller coaster ride of a decade. The lowest of lows, the highest of highs.

It's a decision that could backfire on Tiger. His record in team competition has never matched his individual accomplishments, and the stress of being captain isn't likely to help him on the course. I wouldn't be surprised to see Tiger play in only one or two of the fourball or foursomes matches and save his energy (and back) for a clutch singles match on the final day.

Still, having Tiger will give a boost to the event, which suffers every four years due to the time difference from playing in far-flung locales like Australia.

Win or lose, Tiger will return next year with an eye on major win #16, closing in on Jack Nicklaus' record, and breaking his tie with Sam Snead -- with the first chance possibly coming at the Farmers Insurance Open.

Will the next section of the roller coaster take Tiger to new heights or back down in the depths? After a decade of ups and downs, I'm not going to stop watching now.