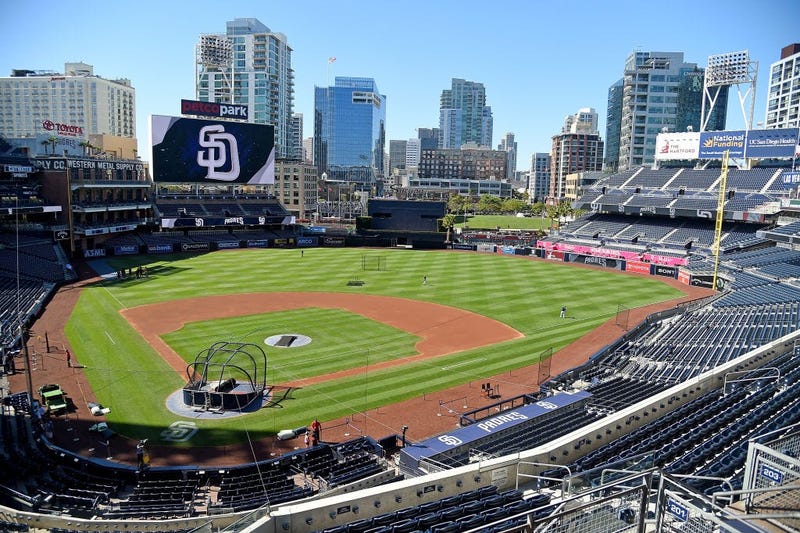 July 6, 2020 07/06/2020 11:35 pm
Major League Baseball has released the new 60-game 2020 schedule as baseball is set to return the weekend of July 24th. Starting off the weekend early on Thursday July 23rd the New York Yankees will play the Washington Nationals followed by the Los Angeles Dodgers hosting the San Francisco Giants for a nationally televised double header.

Here’s what the @Padres 60 game sprint to the playoffs looks like ---- https://t.co/YKhWuvGhRo

Each MLB team will play their own division for 40-games, while playing the regional divsion from the other league for 20-games, of which 6 of those games will be against the team's "natural rival" (ie. LAD v. LAA, NYM v. NYY, SD v. SEA).

As for our San Diego Padres, that will consist of playing each divisional opponent (Arizona, Colorado, Los Angeles, San Francisco) 10 times each. They then play their "natural rival" Seattle Mariners 6 times, play the Texas Rangers and Los Angeles Angels 4 times each, and play the Oakland A's and Houston Astros 3 times each.

San Diego will open the season hosting the Arizona Diamondbacks on July 24th to start a 4 game series at Petco Park. Opening Day for the Padres will actually be Opening Night as the game against Arizona on the 24th will be a 6:10pm start time just like the majority of the Padres games in 2020. After the 4 game series against Arizona the Padres will then travel to San Francisco and Colorado to finish up the month of July.

The first 23 games for the Padres will be played against the National Leagie West before they take on the Texas Rangers on August 17th to start thein interlegue play against the American League West. The Padres will then play their next 10 games against the AL West, including the Houston Astros (Aug. 21-23), and the Seattle Mariners (Aug. 25-27). They will finish up August with their 2nd and final trip to Colorado.

In the month of September the Padres will only leave the State of California once, for a quick trip to Seattle for a 3-game series against the Mariners (Sep. 18-20).

Breaking down every @mlb teams updated 2020 travel schedule... Pretty cool looking at the divisional separation of the schedule this way. pic.twitter.com/ht2Bg3qBnj

In terms of off days throughout the season, the Padres will start the season with 13 straight games before their first off day, followed by an additional 17 games before their next off day. They will then finish their season with 4 off days throughout their last 8 games, as they hopefully get geared up for the playoffs and the month of October...anything is possible in a 60-game season.

As part of the 2020 protocol for MLB, each team is allowed to play a couple scrimmage games right before the season. The Padres will play the Los Angeles Angels on July 20th and July 21st at Angel Stadium as their scrimmage games. Link to the full schedule with dates and times here.
Here is how the rest of the NL West Shapes up:

THE RACE IS ON. pic.twitter.com/YzvkdK76Uj

Bring it on. #SFGiants pic.twitter.com/lxitgCfhwP

Bring on the weird! pic.twitter.com/KIPy1G8Yl1