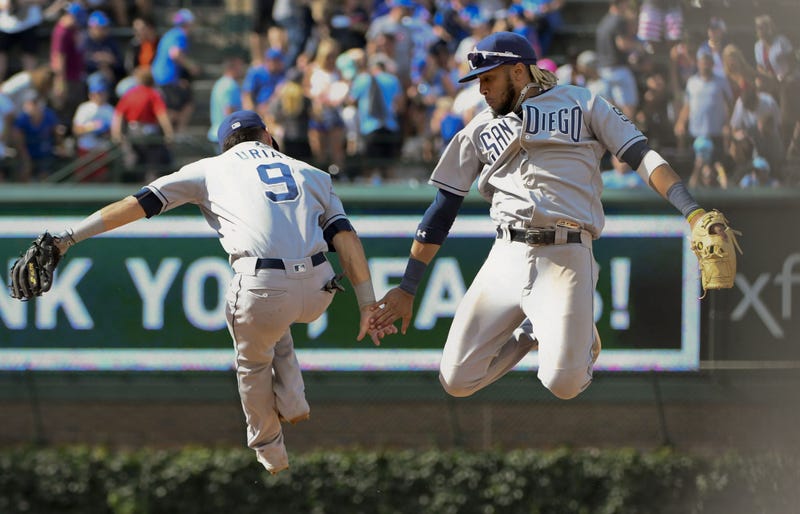 With plenty of due respect, Pete Alonso of the New York Mets may hit 50 home runs this season and lead his team down the stretch to a surprising playoff berth. He plays in the largest media market in the country, so everything he does is magnified. He was this season's Home Run Derby champion. By all accounts, he's a stand-up guy who would help an elderly New Yorker work her way across a busy intersection.

Doesn't matter. He's still not the 2019 National League Rookie of the Year.

Fernando Tatis, Jr. of the Padres is. And for Exhibit A, your Honor, may I simply present a tape of the first two innings in Thursday night's 9-3 San Diego victory over the bumbling Colorado Rockies at Petco Park as evidence:

Top of the first inning, the Rockies have a run in and another in scoring position at second base. Colorado's Ian Desmond hits a hard shot up the middle and into center field...wait a second! That's Tatis in a full-out dive behind second base, gloving the ball to keep it from getting to center field, getting up and throwing out Desmond on a brilliant play to keep the score 1-0.

It wasn't 1-0 for long. That's because, leading off the bottom of the first, Tatis slammed a Jon Gray pitch deep into the right field seats to quickly tie up the score. It was Tatis' sixth leadoff home run this season, a Padre record, and his first since, well...since the day before in Seattle. With the homer, Tatis is now the youngest Padre ever to hit a home run in three consecutive games. He's also only the second Major Leaguer -- along with the great A-Rod -- to hit as many as 20 home runs in a season prior to his 21st birthday.

Uh, that was just the first inning. In the second, Tatis came to the plate again, this time with a runner on third. Gray dusted him off the plate with an inside fastball. Undeterred, Tatis brushed off the dirt from his uniform and then slammed another hit, this one a single to right which gave the Friars a 3-1 lead.

If it may please the court, there's more: Like Tatis making another dazzling play to throw out Desmond in the sixth inning and save another run. Or Tatis bare-handing a flip from second baseman Luis Urias and turning a double play in the fourth inning that prevented yet another run from scoring. For a quick review, let's tally up the magic: Tatis was responsible for two runs on offense and responsible for stopping three runs on defense.

The difference in the game. Put on display by a difference-maker. A Rookie of the Year in waiting.

Despite what we all saw Thursday night, and basically have seen all season -- the two times he tagged up from third base to score on pop-ups to second base come quickly to mind -- there are still many who don't think Tatis can be crowned at season's end. He has made 16 errors, which is the most in the National League. But that stat is wildly misleading.

Almost all of his errors have been on throws that he had no business making in the first place. The reason he shouldn't have made the throws is because he should never have been able to get to the balls to even put a glove on them. Add up all the runs he has saved -- like the three Thursday night -- and it by far makes up for the handful of miscues.

In any other year, Alonso's power number would carry the day. And there are other worthy N.L. Rookie of the Year candidates as well. Like pitcher Mike Soroka of the Atlanta Braves (who's 10-2 with a 2.45 ERA), and infielder Keston Hiura of Milwaukee, and outfielder Bryan Reynolds of Pittsburgh, and another outfielder Alex Verdugo of Los Angeles. In fact, the early Vegas odds actually favor Soroka to take home the hardware.

But in the end, you simply can't convince me that any young player in the National League, or in the Majors, is better than Tatis.