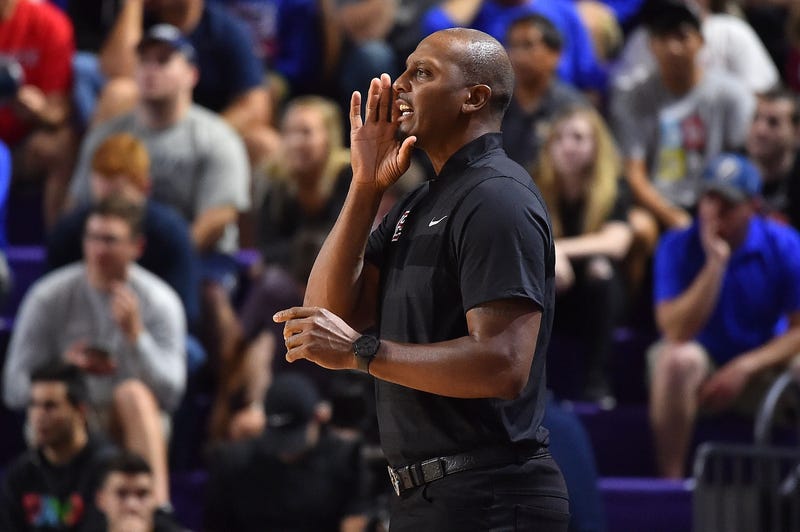 I can't be the only San Diego State sports fan who hasn't thought of the following scenario:

The Seattle Seahawks, currently an NFL playoff contender with a 7-2 record, continue to play well and qualify for the postseason this year. Led by potential MVP candidate Russell Wilson at quarterback, the Seahawks then march through the playoffs right to the Super Bowl. Meanwhile, somewhere along the line, starting running back Chris Carson's season comes to an unfortunate end due to injury.

In the Super Bowl, the Seahawks' new starter at running back, Rashaad Penny, has a day for the ages -- and is named Super Bowl MVP.

Far-fetched? Probably, somewhat. But what odds could you have gotten a year ago that the current NBA Finals MVP and World Series MVP would both come from San Diego State? Of course, that already has happened. Kawhi Leonard, after leading the Toronto Raptors to their first NBA championship, walked off with his second Finals MVP trophy. Then, just a couple of weeks ago, World Series greatness was achieved by Stephen Strasburg, the former Aztec, who help guide the Washington Nationals to their first baseball title.

If Penny somehow does it for Seattle, that would give San Diego State one of sports' all-time amazing trifectas. So why not?

Hey, the Seahawks already have won themselves a Super Bowl, taking down Denver, 43-8, at the end of the 2013 season, then nearly won another won the following year -- losing a heartbreaker at the wire to the New England Patriots. Wilson is a Super Bowl champion quarterback and Pete Carroll is a Super Bowl-winning coach. Sure the San Francisco 49ers would have to be considered favorites at the moment, sporting a perfect 8-0 record, but Seattle could take them down this coming Monday night and change the entire complexion of things.

New Orleans, Green Bay and perhaps Dallas or Philadelphia also may have something to say about it, but Seattle going to the Super Bowl at the end of this season is certainly not anywhere near the category of impossible. So, let's just for a second, say they make it.

Then it would be Penny's turn to step into the spotlight. Another former Aztec, Penny has had big games in college when the lights were on the brightest. He scored the winning touchdown as a sophomore to give SDSU its first Mountain West Conference championship game victory, 27-24, over Air Force at Qualcomm Stadium. I interviewed him on the field right after that game, and the first thing I remember him telling me was that he misheard his named called on the sideline and rushed into the game to replace D.J. Pumphrey just in time to score the winning TD.

"I wasn't even supposed to be in on that play," was the first thing he said. (Like I mentioned, he has the ability to step into the limelight. After his junior season, he scored two more touchdowns -- including the game-winner -- as SDSU beat Wyoming to win the MWC title again).

He certainly could do something similar for the Seahawks in the Super Bowl. After all, far lesser players have achieved Super Bowl glory. Remember, it's just one game, and anybody can have a great game -- like Seattle's linebacker Malcolm Smith (ever heard of him?), who was the MVP on the day the 'Hawks won their only title. Guys named Dexter Jackson, Larry Brown, Desmond Howard, Chuck Howley and Harvey Martin have all won Super Bowl MVP trophies. See if you can remember who all those guys played for.

Timmy Smith is another no-name Super Bowl star, who rushed for a record 206 yards in the first-ever Super Bowl played in San Diego, Super Bowl XXII between Washington and Denver following the 1987 season. He wasn't named MVP that day (a brilliant performance by quarterback Doug Williams usurped him), but he definitely stepped out of obscurity far more removed from the spotlight than Penny is now.

While it's true no former Aztec has won Super Bowl MVP honors before, don't forget that a couple of running backs with strong San Diego ties have taken home the hardware. Marcus Allen, from Lincoln High, won the trophy in Super Bowl XVIII following the 1983 season, while with the then Los Angeles Raiders. Fourteen years later, in Super Bowl XXXII, it was another runner from Lincoln, Terrell Davis, who was the star of Denver's first-ever championship victory over Green Bay -- in another game played in San Diego.

Last year's Super Bowl MVP, Julian Edelman of the Patriots, played his college football at Kent State. A San Diego State guy is certainly capable of winning one of these things as well. And wouldn't the timing be amazing?

Already, what Leonard and Strasburg have accomplished is a story for the history books -- and not just the ones colored Red and Black. Let's see if Penny can do something that would make the whole thing even more remarkable. I mean, hey...let's say he does it. And the Aztecs have three reigning championship MVPs.

Then all we'd have to do is figure out a way to rush some unknown Aztec into the NHL just in time for the Stanley Cup Playoffs.